MILWAUKEE -- A protest of both young and old voices marched three miles across Milwaukee on Saturday, June 13 -- ending at City Hall.

Protesters said they want the people to be able to hold police officers accountable with the creation of a new council. Now, they're hoping city leaders capable of such change will take action.

From the intersection of Layton Boulevard and Pierce Street on Milwaukee's south side, across the 16th Street viaduct and on to City Hall, hundreds marched to voice their support for the end of police brutality and the beginning of police reform. Specifically, the creation of a Civilian Police Accountability Council -- or CPAC. 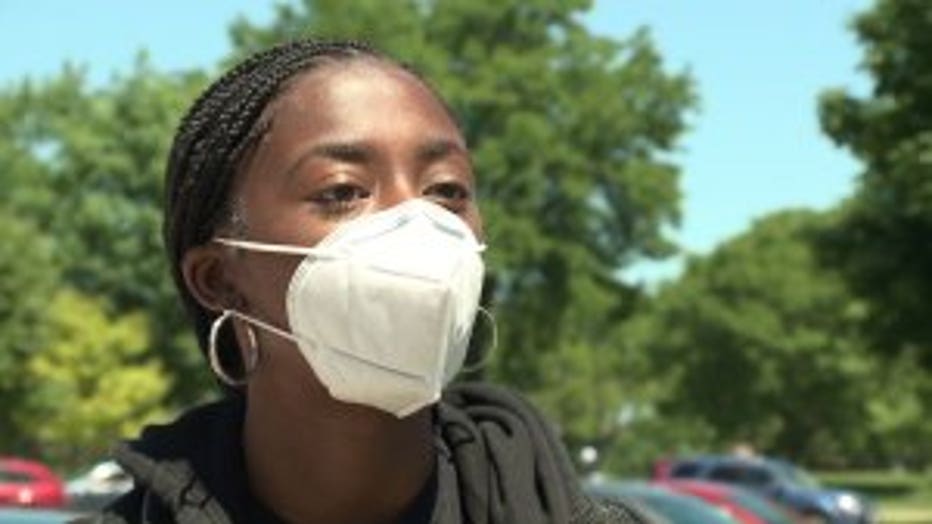 "Something like CPAC, or community control of the police, is putting the power back in the hands of people that have been oppressed for so long," said Lauryn Cross with Milwaukee Alliance Against Racist and Political Repression.

The Milwaukee Alliance Against Racist and Political Repression, which led Saturday's march, says the council would replace and have more power than the current Milwaukee Fire and Police Commission. The organization also says it would be comprised of elected citizens instead of mayoral appointments. 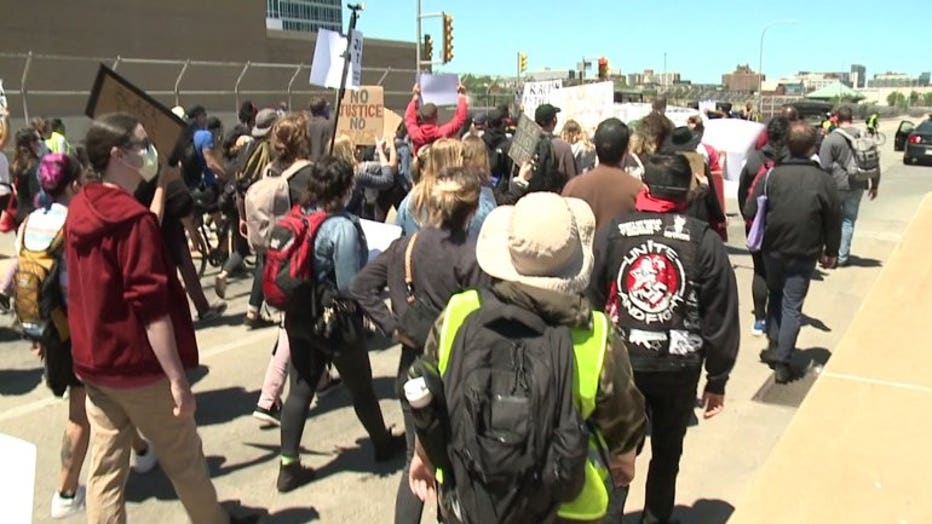 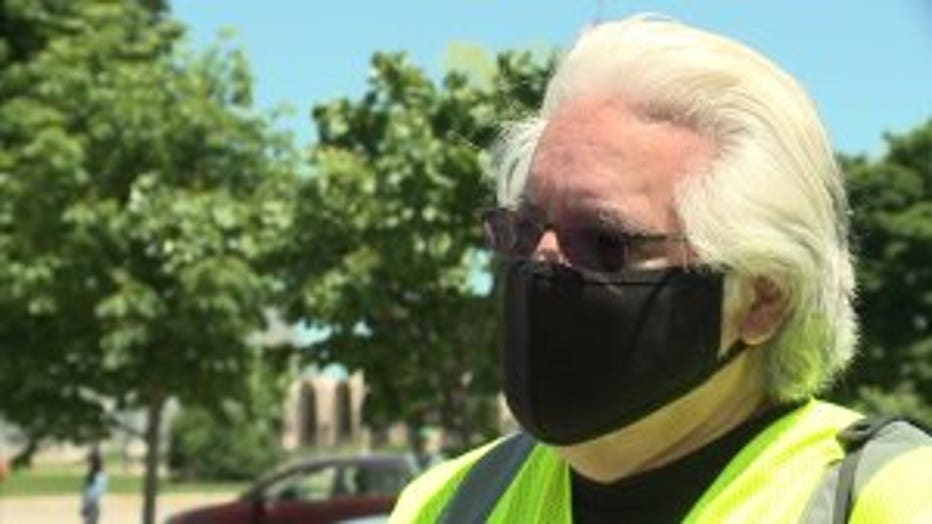 "I think it would make the streets safer if, in fact, the police knew that there would be serious repercussions if they were out here brutalizing or even murdering any citizens," Brian Verdin with Milwaukee Alliance Against Racist and Political Repression said. 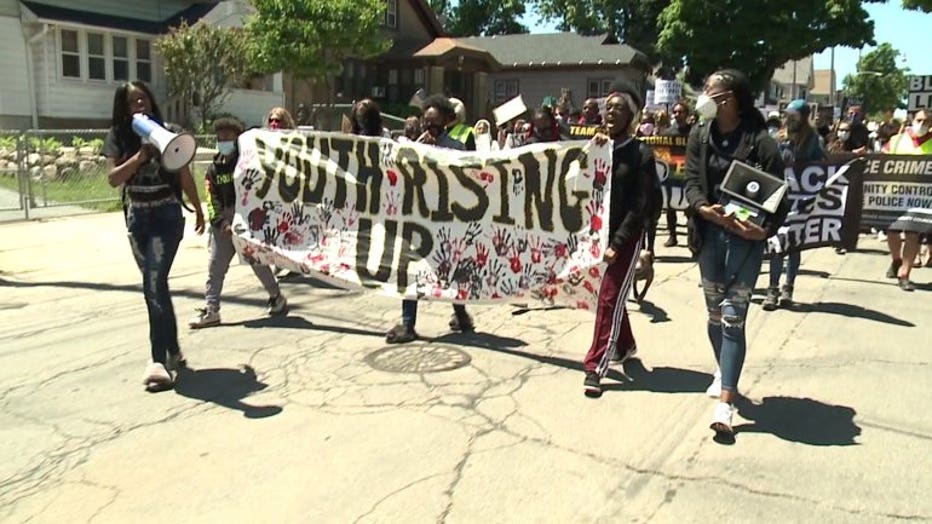 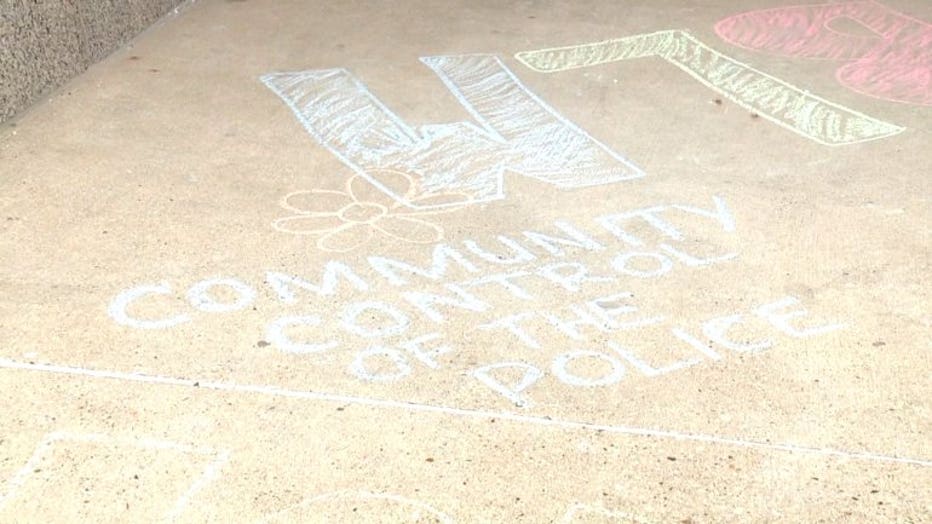 Protesters chalk messages at the base of Milwaukee City Hall

To ensure their message wasn't just heard, but received, protesters chalked messages at the base of City Hall hoping leaders will take notice -- and action. 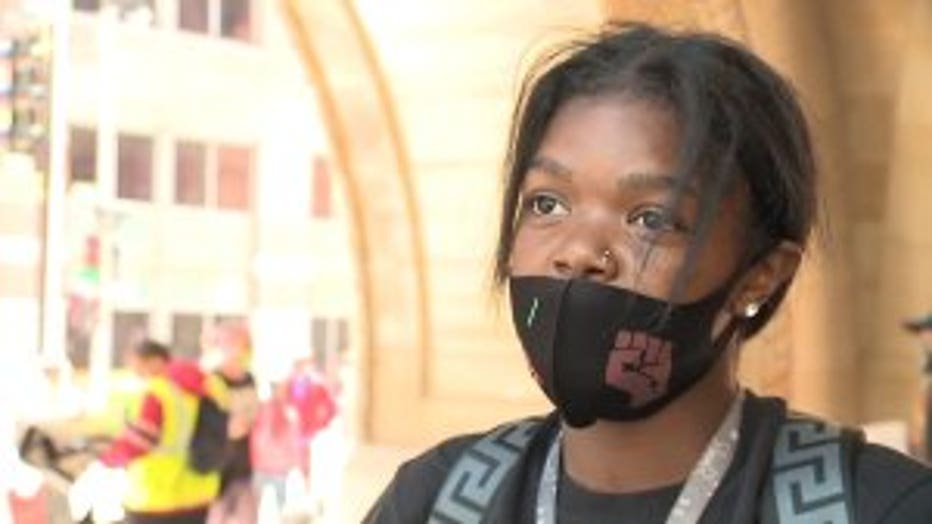 "We've been walking up and down these streets, and there's still police brutality. No police officers are getting arrested, convicted, none of that," said Kimora Caldwell with Youth Rising Up. "If we write it for all y'all to see it, then there's no way y'all couldn't understand it."

Many protesters feel there are good police officers within local police departments, but say they can't trust officers until the "bad ones" are removed. In their proposal, CPAC would have the power to do just that. 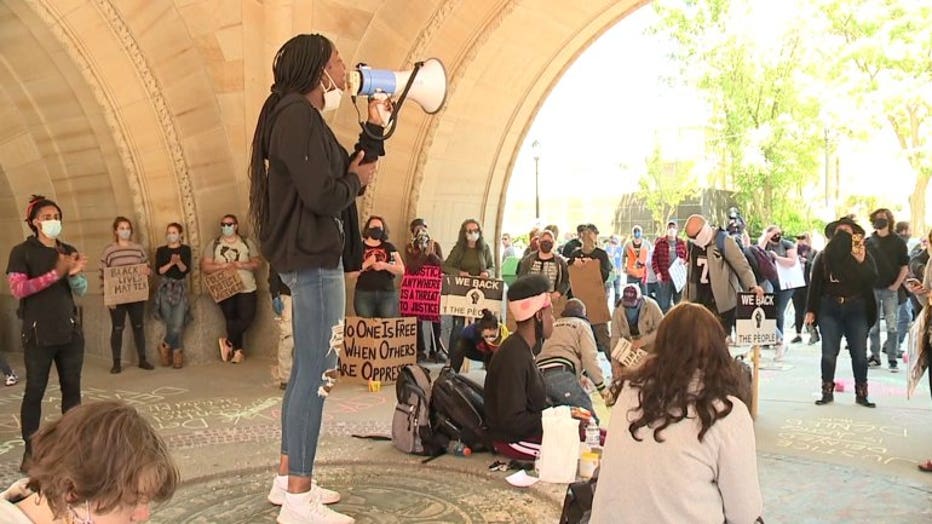 That group also wasn't the only protesting in the city on Saturday.

Chalk art was written in several languages outside Fiserv Forum. The art displayed messages in support of Black Lives Matter -- reminding men and women of color that they are strong, beautiful and loved. 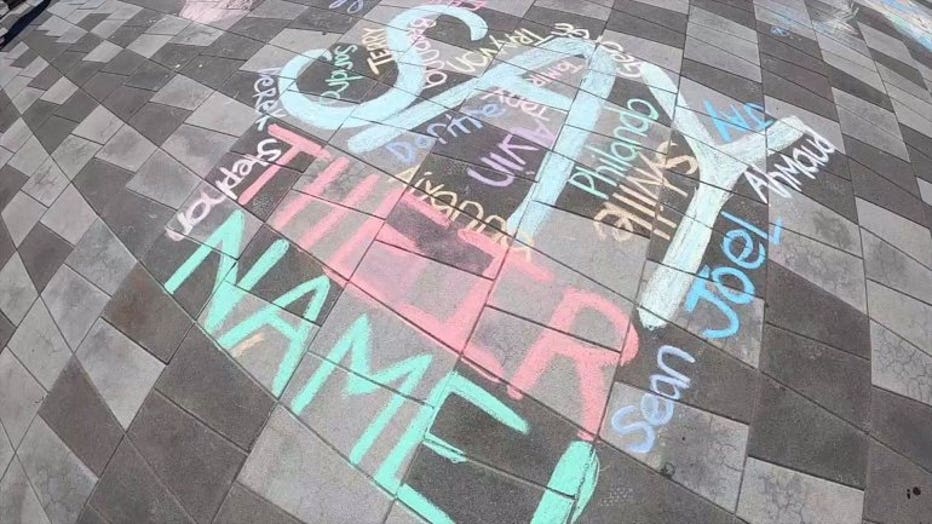 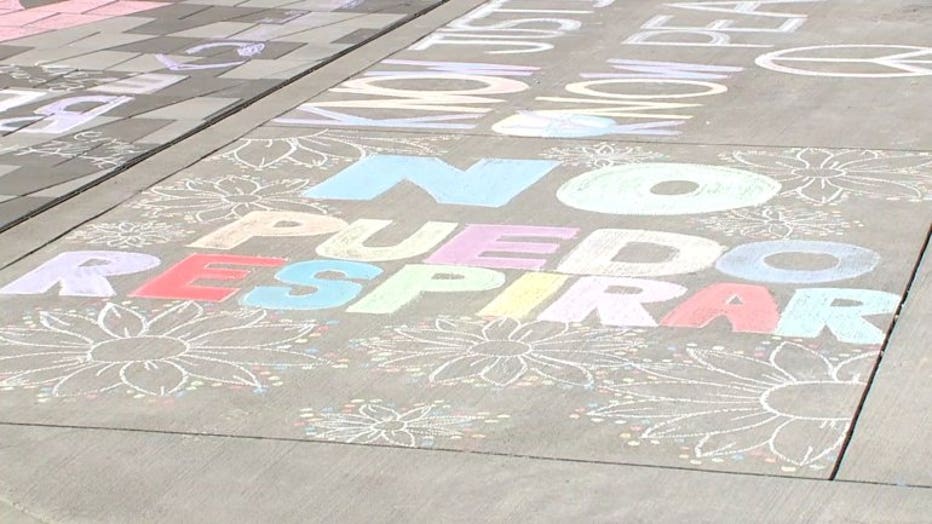 Milwaukee elders held a sit-in for justice on Saturday. They brought lawn chairs and lined up along Dr. Martin Luther King Jr. Drive near North Avenue. 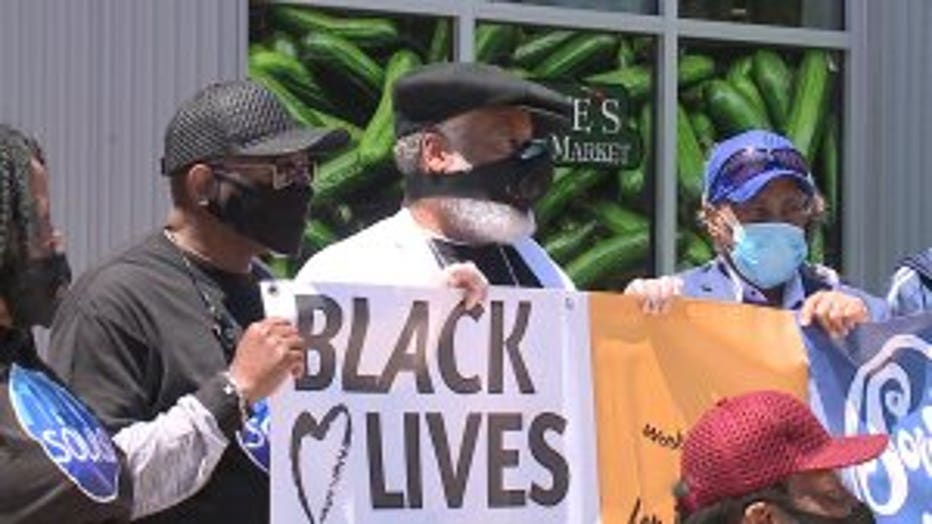 Organizers of the sit-in provided masks and hand sanitizer -- they didn't want the fear of the pandemic to keep them from the streets.

"I just want everyone to know that being old doesn't mean we don't care," one protester said. "We're standing with these young folks."

There were also tables set up, helping seniors get registered to vote and to request an absentee ballot.

In a Facebook post-Saturday, Nitty wrote: "If we don't fight for us...who will?"

Dozens gathered to show their support, chanting "Black Lives Matter" and continuing to walk the streets. Among them, family of Joel Acevedo -- the Milwaukee man who died following an altercation with an off-duty Milwaukee police officer. 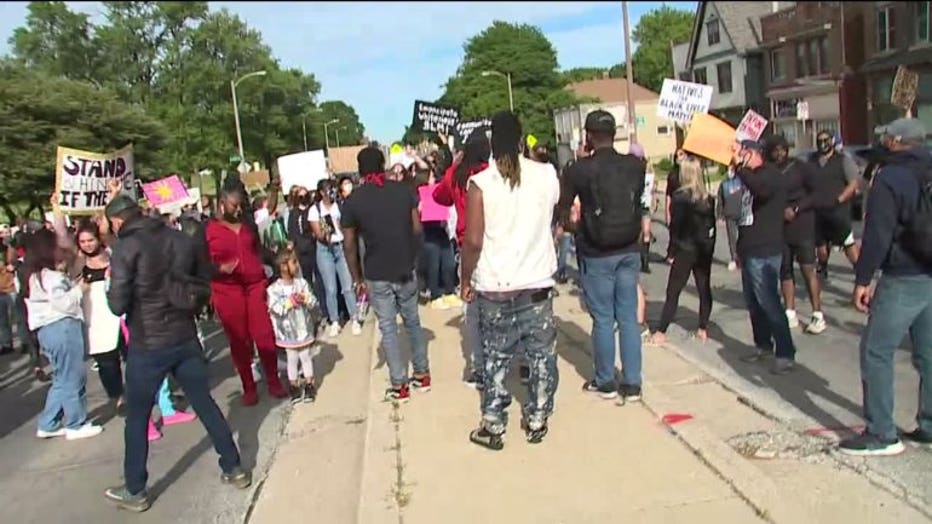 In the suburbs, some Germantown High School students organized a march against police brutality and racial injustice. 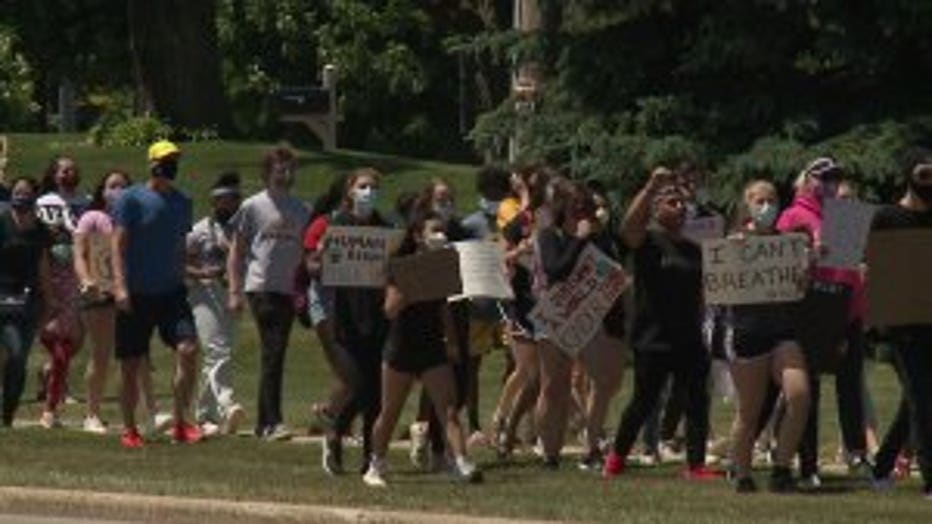 Dozens marched from the high school to the Germantown Police Department. Protesters said the goal was to be peaceful and bring people together to promote change for a good cause.

"Here we are in 2020 marching about something that should have...that shouldn't be here. That should be gone, racism," Germantown High School student Andrea Wu said. "I think it's important. It's finally time to put an end to it after so long."

Student protesters said police were on board with the idea and helped make sure the demonstrators got through traffic safely.