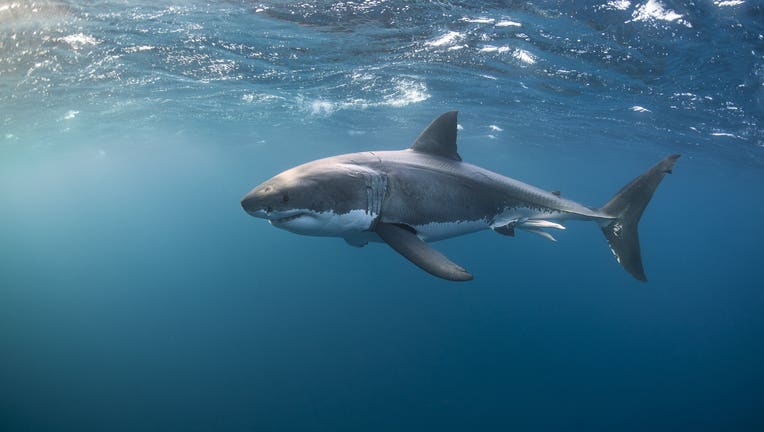 The great white shark population off the California coastline is increasing.

In a recent study published in the journal Biological Conservation, researchers from Stanford University, the Monterey Bay Aquarium and Oregon State University's Hatfield Marine Science Center found that between 2011 and 2018 great white shark numbers in the area had notably risen.

Although the group found both male and female sharks, the estimate of the adult female population showed just around 60 in the region.

Underwater video recordings and photographs helped to collect the data and a seal decoy was used to lure the apex predators.

"The finding, a result of eight years of photographing and identifying individual sharks in the group, is an important indicator of the overall health of the marine environment in which the sharks live," study co-author Taylor Chapple of the OSU Coastal Oregon Marine Experiment Station said in a statement.

"Robust populations of large predators are critical to the health of our coastal marine ecosystem," he explained further. "So our findings are not only good news for white sharks, but also for the rich waters just off our shores here."

The prevalence of white sharks – which are found in coastal waters across the world – likely means good news for the population size of its prey, like seals and other marine mammals.

The research could also indicate that measures to protect the species are working.

As LiveScience notes, white sharks are threatened by overfishing and poaching.

Many credit the 1972 Marine Mammal Protection Act, which led to the recovery of the white shark's prey, and California's 1994 great white shark fishing ban.

However, white sharks are migratory, and this group journeys through the Pacific waters between Baja and Hawaii and more inland as far north as Washington state.

According to the National Oceanic and Atmospheric Administration (NOAA), white sharks are also found off the East Coast near New England, although most were hunted to low numbers.

"It’s hard to estimate how many white sharks are in our oceans, as they are relatively rare. Research shows that protections for sharks have likely improved their numbers, particularly in the Northwest Atlantic," the agency said in 2019.

Study authors pointed out that a "similar regional increase in white shark numbers in the US Economic Exclusive Zone of the northwest Atlantic showed a recovery towards early historical numbers," citing a 2014 study that forecast an optimistic outlook to white shark recovery in the Atlantic.

"While there are no historic baselines of white shark abundance that preclude management policies implemented in 1994 in the Pacific northeast, the results of this study suggest recent favorable management in California (including marine mammal protection, and white shark bycatch mitigation) may be contributing to a pathway for the positive population growth for this important marine top predator," the 2021 study authors wrote.

"Given the vulnerable life history traits of white sharks, insuring their future will take a continued effort to monitor populations and identify potential future threats such as climate change and unregulated high-seas fisheries," they said.

"Losing just a few animals can be really critical to the larger population," the study's lead author Paul Kanive, of Montana State University, said in the release. "It’s important that we continue to protect them and their surroundings."