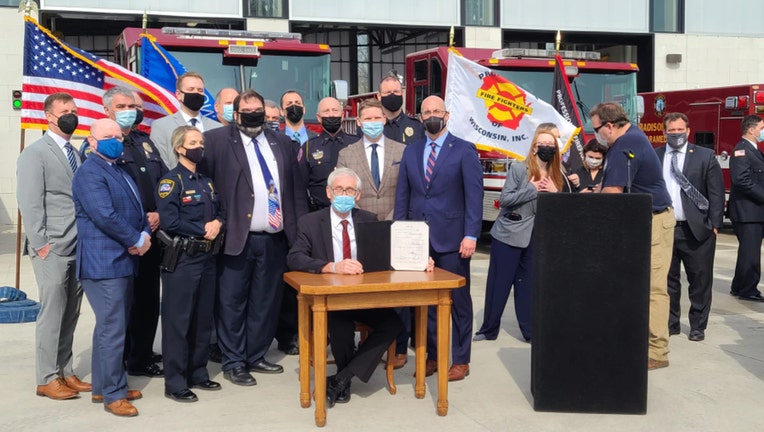 Right now, police and firefighters can claim worker's compensation for PTSD but they must prove the condition was caused by unusual stress compared to what their co-workers regularly experience. Under the bill, a police officer or firefighter needs only a diagnosis from a licensed psychiatrist or psychologist and the diagnosis doesn't have to be based on the employee suffering greater stress than his or her co-workers.

The bill limits compensation to 32 weeks, however, and allows responders to make only three such claims in his or her lifetime.

Police and firefighters have been pushing for the changes for several years, saying it could help prevent employee suicides. The bill failed in the Senate during the last legislative session. This time the Senate, now under control of new Republican Majority Leader Devin LeMahieu, passed the measure unanimously in February. The Assembly passed it on a voice vote earlier this month.

Evers signed the bill at a Madison fire station.

COVID-19 risk by the numbers if you avoid vaccination: UW Health

UW Health announced on Tuesday, April 27 that there is a critical mass of evidence that shows being vaccinated for COVID-19 is far better than the alternative.

You can now test yourself for the coronavirus at home

For $24, you can now test yourself for the coronavirus at home and get results in 15 minutes. No prescription is required.