Are you a guinea pig lover?

Or just a lover of animals/all things adorable?

You'll definitely want to check out THIS story, from CNN's Jeanne Moos:

How many times have you asked yourself "where can I get a suit of armor for my pet?!"

Well, ask no more! There is a suit fit for a guinea pig, up for auction on eBay! 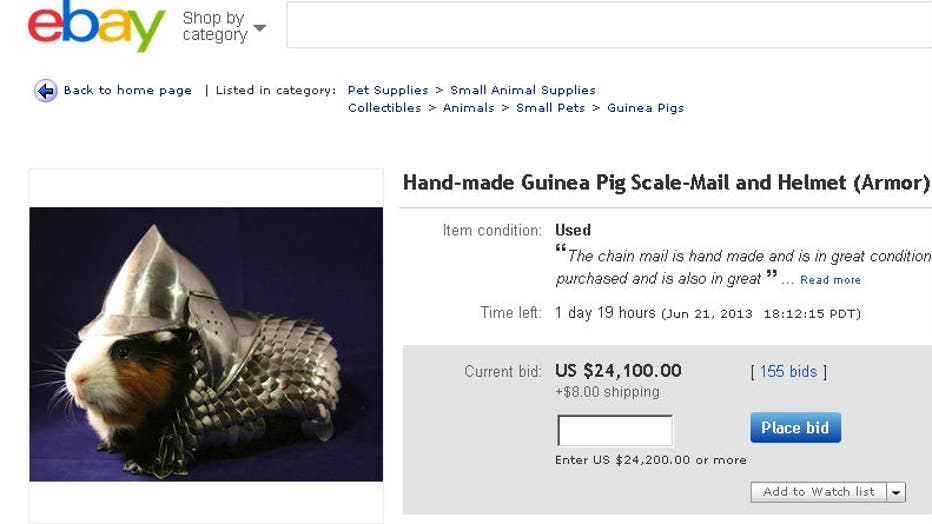 The knight in shining armor in this story is a guinea pig -- more likely to go up against his owner's wiener dog!

The guinea pig featured in the suit of armor is named "Lucky."

But sadly, his luck ran out in early June, when he died of natural causes.

McCoy decided to auction off his guinea pig's armor on eBay -- with the proceeds going to an organization that helps guinea pigs find homes in the Washington, D.C. and Virginia areas.

It took McCoy seven weeks to weave the stainless steel scales for the armor.

"You should have seen blisters on my hands from two pairs of pliers. It's horrible," McCoy told CNN's Jeanne Moos.

The eBay description reads: "Is your pet guinea pig tired of wandering around the house unarmored and vulnerable? Has your guinea pig ever wanted to go with you to a Renaissance Fair, but had nothing to wear?!"

McCoy says he bought the helmet at a Renaissance Fair.

Some have suggested perhaps Lucky should have been buried in his noble suit of armor -- but the armor wasn't Lucky's favorite thing!

"He hated it. He absolutely hated wearing it. It's pretty big and pretty heavy," McCoy said.

As it turned out, Lucky had worn the armor just once -- for about 10 minutes, while McCoy took pictures.

McCoy says Lucky kept fidgeting and squeaking -- and then suddenly stood still in the perfect pose!

Though Lucky wasn't much of a swordsman -- a fan on the website Reddit sketched him ready to do battle.