NEW ORLEANS — Workers tied ropes around a towering statue of Gen. Robert E Lee, preparing to take down the last of New Orleans' four Confederate monuments Friday as hundreds gawked and some danced in the streets.

The statue of Lee, who commanded Confederate armies against the Union in the Civil War, was the most prominent of the four statues, his bronze figure standing nearly 20 feet (6 meters) tall in uniform, arms crossed defiantly, gazing northward. 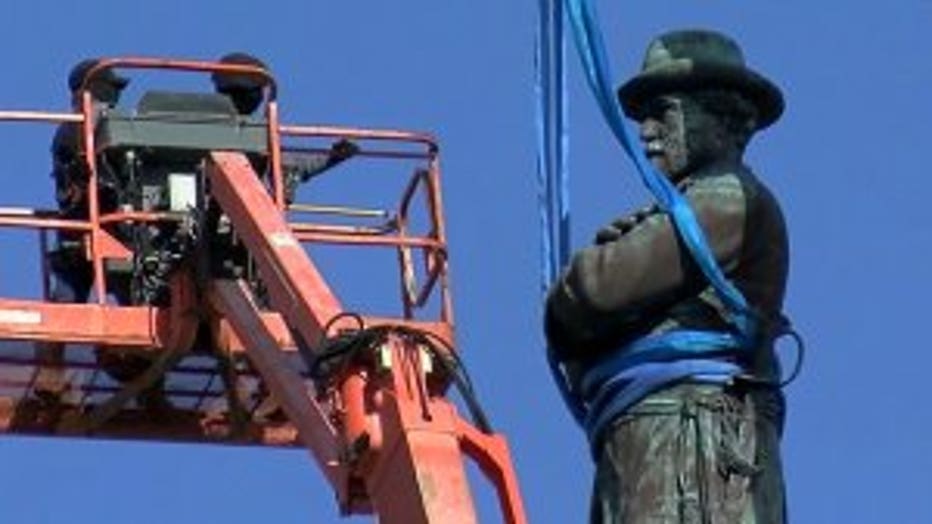 Workers jockeyed a tall crane into position Friday morning to reach the statue, which has perched atop a 60-foot (18 meter)-high pedestal in a traffic circle where it has been since 1884. The removal comes after a long and divisive battle over whether old South emblems represent racism or an honorable heritage.

While many were supportive of removal, opinions varied widely in the crowd.

Al Kennedy, who is white and a former New Orleans school board member, supported removal of the statues. Of the Confederate past, he said: "It's my history, but it's not my heritage."

But Frank Varela Jr., a born-and-bred New Orleans native carrying an American flag, said he thought Lee should stay up as "a part of the South."

"It's part of history. It's a part of my heritage," said Varela. "I was born and raised here. It's been here all my life ... When we came back from Katrina it was here. It's survived every hurricane this city has ever seen."

Police on horseback lined up nearby as a security precaution and traffic was diverted away from the area. But protesters defiantly opposed to removal were few as the work wore on for hours Friday afternoon — though some shouted out against the removal. 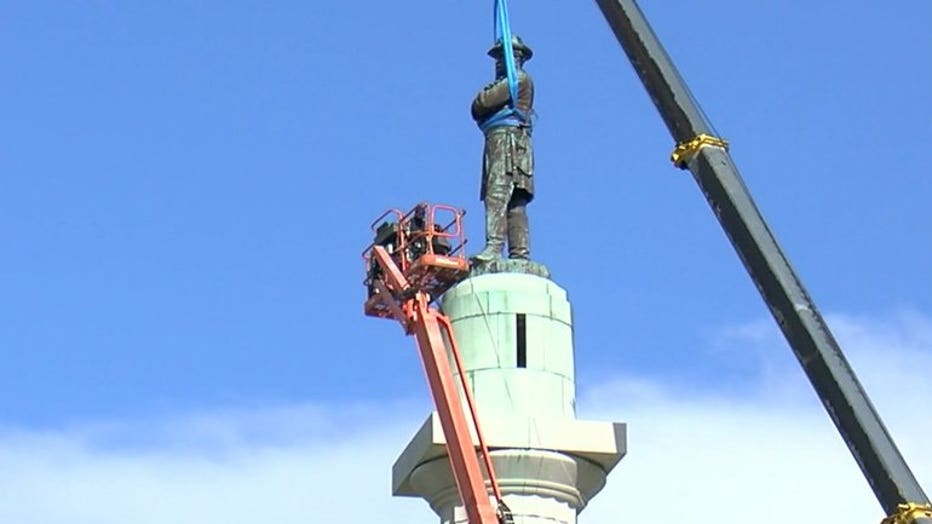 For many, it was a time for festivities.

Bystander Brittnie Grasmick danced to the song "Another One Bites the Dust," calling that an appropriate selection for the occasion.

One young man rode a unicycle, children drew chalk hearts in the street and young women jumped rope. Some brought out lawn chairs to watch, entertained by a trumpeter who played "Dixie" — but in a minor key.

The Lee statue had towered over a traffic circle — Lee Circle — in an area between the office buildings of the city's business district and stately 19th-century mansions in the nearby Garden District. The city plans to leave the column where Lee's statue stood intact and will mount public art in its place.

Mayor Mitch Landrieu pushed for removal of the statues, which he said celebrated white supremacy. He said this final removal will allow the Louisiana city to "heal and become the city we always should have been had we'd gotten this right the first time."

He delivered a speech Friday afternoon in which he declared the Confederacy was "on the wrong side of humanity."

The Robert E. Lee statue was a familiar landmark for tourists and commuters who travel busy St. Charles Avenue by car or on one of the city's historic streetcars. Lee's is the last to be removed in accordance with a 2015 City Council vote.

Those three statues were taken down in pre-dawn hours without advance public notice, a precautionary measure after officials said threats were made against contractors and workers involved.

Unlike the earlier statues, city officials were taking Lee's statue down in broad daylight. Landrieu said the change was made to "maintain the safety of the construction worker" because of its proximity to electrical wires and New Orleans' famous streetcar lines.

As part of the extra security Friday, police cordoned off a one-block radius around Lee Circle to cars in anticipation of protests. But by late Friday afternoon, no significant protests had materialized.

Landrieu had proposed removing the monuments after the 2015 massacre of nine black parishioners at a South Carolina church. The gunman was an avowed racist who brandished Confederate battle flags in photos.