ST. AUGUSTINE, Fla. -- Three dozen descendants of fallen Confederate soldiers want a Florida city to hold off on removing a Confederate monument, worrying the historic relic might be damaged in the process, according to a lawsuit.

St. Augustine city commissioners voted last week to remove the monument, which is the oldest Civil War monument in the state. It also rests in an area designated as a national historic landmark. The 30-foot tall relic, which lists the names of fallen soldiers, was placed in Plaza de La Constitution in 1879.

The St. Augustine Record reported Monday that petitioners of the lawsuit fear the city can’t guarantee its safe removal and want the city to wait until the Historic Architectural Review Board can evaluate the removal process. 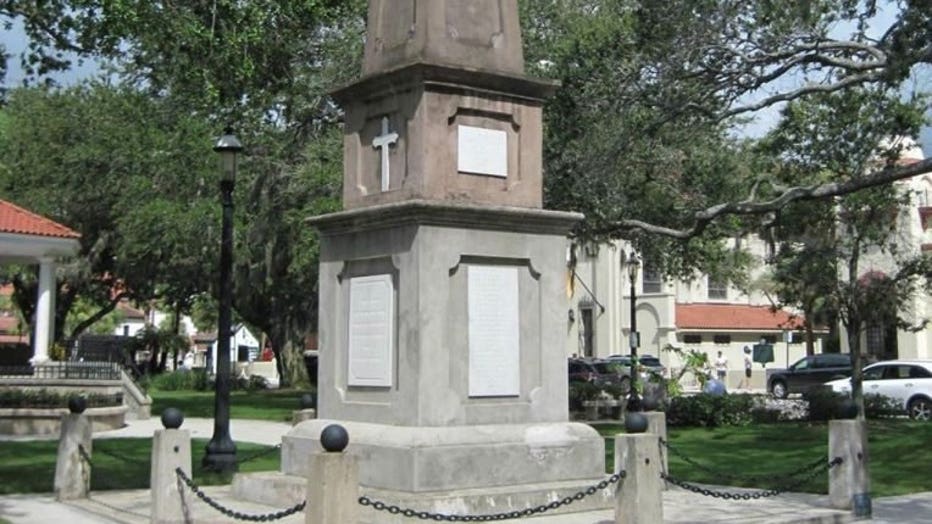 “This monument was a communal effort, public art, and social history. Ex-soldiers and politicians had a difficult time raising funds to erect monuments so the tax mostly fell to the women, the mothers, widows and orphans, the bereaved fiancees and sisters of the soldiers who had lost their lives,” the lawsuit stated.

St. Augustine officials declined comment, but said they can’t guarantee safety because of the difficulties preserving large, historic objects. The removal process can take weeks and cost more than $100,000, according to experts.

A judge recently dismissed a separate lawsuit seeking to stop the city from moving the monument at all, although petitioners said they planned to amend the suit and refile it.

The latest lawsuit was filed on behalf of Jill Pacetti and other descendants of men named on the memorial, the Veterans Council of St. Johns County and the Military Officers Association of America, Ancient City Chapter.

“We just feel like to bring the memorial down because of a race issue is not going to bring the community together,” Pacetti said. “No one went through the necessary steps to even look at the architecture of the memorial. Can it be moved? Can it be taken apart?”

The petitioners are requesting a temporary injunction to prohibit the city from relocating it until a study is done by a review board.

It’s unclear where the monument will be be taken.

Jaime Perkins spent years trying to get the memorial removed and was even spit on at one point during protests to take it down.

“I feel like our Commission finally is listening to its minority residents,” she said. “It’s finally taking heed to ... how we feel.”