ANDERSONVILLE, Ga. --  A maintenance supervisor at a national park in Georgia found a fawn huddled up at the foot of a headstone for an unknown soldier Wednesday.

The young deer is seen curled up alongside an American flag and the grave marker in a photograph shared by the Andersonville National Historic Site’s Facebook page. 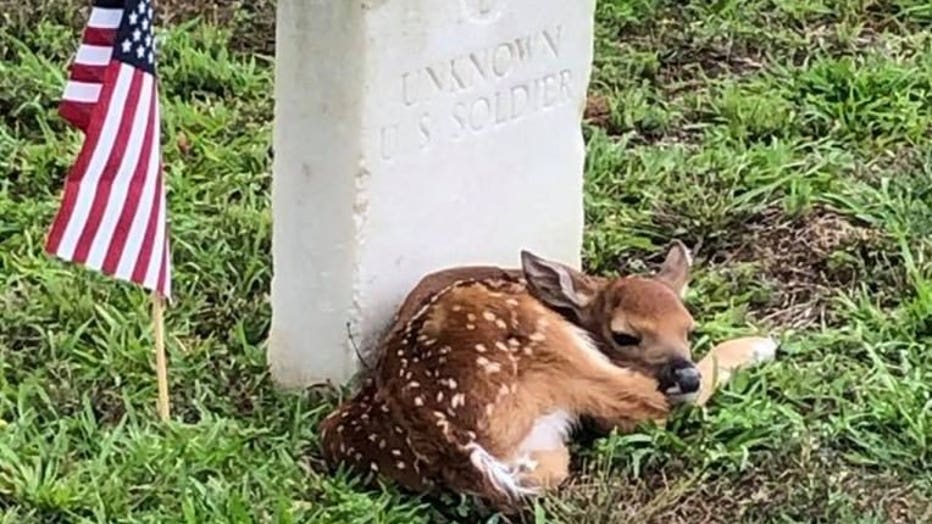 It was taken at the Andersonville National Cemetery, where the headstone reads “Unknown U.S. Soldier.”

The Andersonville National Historic Site traces its roots back to the Civil War, when it housed Camp Sumter, one of the Confederacy’s largest military prisons, according to the National Parks Service.

It was used for 14 months to incarcerate more than 45,000 Union soldiers captured during the war. Almost 13,000 of them died.

Andersonville National Cemetery, established in July 1865, is still in use, receiving more than 150 burials a year. The historic site also includes a memorial to all American prisoners of war and the National Prisoner of War Museum.

Authorities said that park staff members saw the mother deer return for her young later in the day.

Wildlife experts say that it’s common for a parent to leave her fawn and forage for food this time of year.

“In most cases, the best thing to do if you find a young wild animal is it leave alone,” the Massachusetts Division of Fisheries and Wildlife said in a press release earlier this month.

“Finding a young animal alone does not mean it’s been abandoned or needs to be rescued,” according to the agency. “Adults are often nearby and visit their young only occasionally to avoid detection from predators.”

Even if a fawn is left alone for several days, it should be left alone, wildlife authorities say.

They warn that well-meaning humans can inadvertently delay a fawn’s next meal by repeatedly visiting the young animal. Other young mammals and birds should be left alone, as well, unless they have a clearly visible injury or a dead parent.