MINNEAPOLIS (FOX 9) - The state called several more members of the Minneapolis Police Department to the stand Tuesday to testify in the trial of Derek Chauvin, the former Minneapolis police officer charged in the death of George Floyd.

Here are the witnesses who testified on Tuesday:

Court ended shortly before 3:30 p.m. after Hennepin County Judge Peter Cahill indicated there may be a legal issue that needs to be addressed with the state’s use of force expert, Sgt. Jody Stiger of the Los Angeles Police Department.

Judge Cahill sent the jury home. Court is in recess until 9:15 a.m. Wednesday.

Use of force instructor: MPD officers not trained to use knee on neck

The prosecution Tuesday focused on the training that Minneapolis police officers receive.

The first witness to take that stand was Sgt. Ker Yang, a 24-year veteran of the Minneapolis Police Department who currently coordinates the MPD’s crisis intervention training. He testified that four years before Floyd’s death, Chauvin had taken a 40-hour course on crisis intervention and how to use de-escalation techniques.

The second witness, Lt. Johnny Mercil, wrote MPD’s use of force training curriculum. He testified that an officer’s use of force needs to be reasonable and proportional.

Mercil said proportional force means officers should "use the lowest amount of force necessary," but can increase the amount of force they are using if a lower level of force is not working or is unsafe to try.

"If you can use a lower level force to meet your objectives, it’s safer and better for everyone involved," he said.

Minneapolis Police Lieutenant Johnny Mercil, who trained officers in use of force, said Chauvin's tactic of keeping his knee on the neck of a handcuffed suspect who did not appear to be resisting is not an authorized use of force.

Mercil testified that using a knee on someone’s neck is not an MPD-trained neck restraint, but it "isn’t unauthorized" in use of force. He confirmed, however, that Chauvin’s knee on Floyd’s neck would not be authorized after Floyd was handcuffed and under control.

In cross-examination, Chauvin’s defense attorney, Eric Nelson, asked Mercil about a number of hypothetical situations and what kind of force officers would be authorized to use in each.

Mercil confirmed there are times when it is appropriate to hold someone in a neck restraint after they have lost consciousness. "Yes, you can have your arm around their neck for a period of time," he said.

George Floyd's brother says being in courtroom is 'nail-biting'

Rodney Floyd, one of George Floyd’s brothers, was in the courtroom on Tuesday. Only one member of the Floyd family is allowed in the courtroom at a time due to COVID-19 restrictions, so the family has been rotating who takes the seat each day.

Rodney told the pool reporter that being in the courtroom, "it’s nail-biting. It’s like watching a movie. There’s so many ideas of what’s going to happen."

He was also in the courtroom last week, when body camera footage from his brother’s deadly arrest was repeatedly shown. He said seeing and hearing his brother in the videos was "very hard."

"When someone dies you cherish their last words but my brother’s last words, oh, those words are stuck in my head," Rodney said. "Agonizing."

Rev. Al Sharpton joined the Floyd family in Minneapolis on Tuesday, leading them in a prayer outside the Hennepin County Courthouse, praying for justice for George.

Philonise Floyd, the brother of George Floyd, said Tuesday that after his family and others get the verdict in the Derek Chauvin trial, which he believes will be a conviction, they will be able to breathe. Philonise spoke following a group prayer led by Rev. Al Sharpton outside the Hennepin County Courthouse, where the Chauvin trial is taking place.

After the prayer, Philonise Floyd, another one of George’s brothers, spoke.

"After we get the verdict and we get this conviction, we’ll be able to breathe," he said.

No decision yet on testimony from Floyd companion Morries Hall

Court proceedings began Tuesday with a hearing where Morries Hall, one of the people who was with Floyd the night of his deadly arrest, appeared remotely from jail. Judge Cahill is allowing him to wear civil clothes. 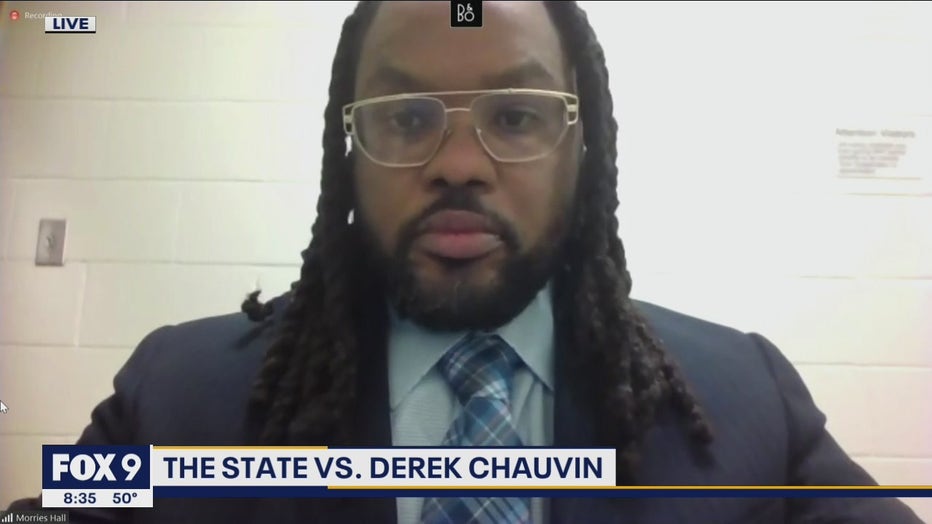 Morries Hall, who was with George Floyd the night of his deadly arrest, appeared in court remotely from jail Tuesday.

Last week, Hall’s attorney notified the court that if called to testify, Hall intends to plead the Fifth Amendment, which gives anyone the right to remain silent and not incriminate themselves.

Hall has been seen and heard in multiple angles of surveillance video, police body camera footage and City of Minneapolis cameras throughout the six days of witness testimony. He was in Cup Foods with Floyd and was also in the vehicle with him when officers first approached.

Hall’s attorney, Adrienne Cousins, said Tuesday that Hall has no immunity and no protection, therefore he plans to invoke his Fifth Amendment right against self-incrimination. She is particularly concerned Hall’s potential testimony about Floyd’s drug use in relation to his death could expose him to a third-degree murder charge.

Judge Cahill did not rule on the matter yet. He said he will allow a "narrow limited area of testimony," about Floyd’s condition prior to his arrest. He has asked the defense to draft possible questions they could ask Hall and provide them to him by Thursday, which will give Hall time to meet with his lawyer and decide if he will answer the questions.

"We need to tread carefully on this," Judge Cahill said.

There will be another hearing on this issue.

Stay up to date on the trial of Derek Chauvin. Sign up for FOX 9's email newsletter for daily updates. Get breaking news alerts and watch the live stream in the FOX 9 News app. Download it for Apple or Android.