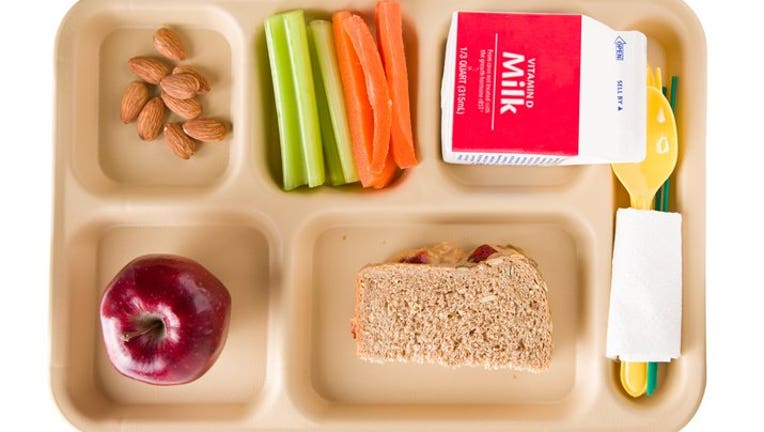 MADISON, Wis. - Demand for school meals plummeted in Wisconsin during the pandemic — even though federal waivers and funding meant that in the vast majority of cases they were free to any student, and even as many districts sought to distribute them curbside or via delivery while classrooms were closed to in-person learning.

Now, Wisconsin is using federal coronavirus relief funds to continue a program that provides food-stamp-like credits to low-income families to cover the cost of school meals retroactively to the beginning of this school year — effectively doubling food benefits for families in districts that have continued to make meals available during online school.

There are about 362,000 children in Wisconsin who qualify for free or reduced-price school meals, according to the state Department of Public Instruction, or about 44% of the total. But under a series of waivers issued by the U.S. Department of Agriculture, school districts have been allowed to provide all students, regardless of family income, with free school breakfasts and lunches.

In Madison, the total number of meals served from March 2019 through February 2020 and in the same period a year later dropped by more than half from about 3.1 million to about 1.2 million.

In Verona, the district served about 388,000 breakfasts and lunches in the fall of 2019, but only about 156,000 in the fall of 2020, and the Middleton-Cross Plains district went from about 61,000 meals per month provided by the district and its education foundation pre-pandemic to about 16,000 per month post-pandemic. In Sun Prairie, total breakfasts and lunches provided from September 2019 through January 2020 was 210,080, and during the same period a year later, 187,080.

All the districts made free meals available at various sites and times for almost the entirety of the time their schools were closed to in-person learning, and in some cases delivered meals directly to students’ homes.

"It was important to our Board of Education members and our administrators to ensure that students had access to nutritious meals regardless of whether they were learning virtually or in person," Verona spokesperson Raechelle Belli said.

Why more families — especially lower-income families — didn’t pick up more of those meals is unclear.

Anecdotally, some Middleton-Cross Plains families "indicated now that their children were learning from home, they didn’t need free meals" or that "the times meals were delivered weren’t convenient as they didn’t want their children to miss instruction," district spokesman Perry Hibner said.

"Some families with means weren’t having lunches delivered because they feared that might keep others who needed them more from getting them," he said. "Obviously, that isn’t the case, as the free meals are open to all students."

Softer demand for school meals doesn’t necessarily mean that there hasn’t been, by some measures, an uptick in the need for food, even as Wisconsin appears to be recovering faster than the nation as a whole from the economic effects of COVID-19. Tax revenues and the state’s budget, for example, have proven unexpectedly resilient, and while the national unemployment rate stood at 6.0% in March, it was only 3.8% in Wisconsin.

Kris Tazelaar, the marking and communications director at Second Harvest Foodbank, said the pantries his organization helps stock in 16 southwestern Wisconsin counties distributed 46% more food from March 15, 2020, to April 3 than in the same period a year earlier.

While he didn’t have any data to prove it, he suspected part of the reason fewer school meals are being distributed is that it’s hard for parents to find a way to get to pickup locations at the times districts are offering meals.

"It actually highlights one of the primary barriers around food insecurity, which is transportation," he said.

People still need to find transportation to pantries, but their hours of operation might be more convenient for working parents, he said.

The state is also seeing an increase in the percentage of children considered "food insecure," according to the advocacy group Feeding Wisconsin, meaning they lacked access "at times, to enough food for an active, healthy life" and had "limited or uncertain availability of nutritionally adequate foods," and that their families may have had "to make trade-offs between important basic needs, such as housing or medical bills, and purchasing nutritionally adequate foods."

On the other end of the spectrum, Wisconsin, like much of the United States, has struggled with childhood obesity. According to 2017 data from the U.S. Centers for Disease Control and Prevention, 28.7% of Wisconsin high schoolers were overweight or obese. And the CDC reports that as of 2016, 32.1% of children ages 2 to 4 and enrolled in the Women, Infants and Children nutrition program for low-income families were overweight or obese.

There’s some evidence to suggest that food insecurity and obesity can coexist — although less so in children — because of the social stressors and lack of access to healthier foods more likely to be faced by low-income people.

Madison, with the largest percentage of low-income students of any district in Dane County, did not make someone available to answer questions about why more families weren’t picking up the meals.

Those stopping by a Far East Side Madison pickup site recently, however, praised the program. Over the course of an hour and 40 minutes, about five families collected boxes of food.

"To be honest it has saved our lives a couple times," said Anna Villegas, who has a daughter and has gotten food from the district directly and through her sister who’s received deliveries from the district. "It really has had a huge impact on most of us."

Villegas said she had COVID-19 in January, has lost her job and was facing eviction.

Quintina Harden, who has four children in the Madison School District and in the federal free and reduced-price school meal programs, said the program has been "really helpful."

"My kids don’t eat everything in there and I try to re-gift it to someone else because my kids don’t do a lot of vegetables," she said. "But it’s some snacks in there. All kids like to snack during the week and then sitting on the computer, they pretty much snack the whole time they’re on the computer."

She said she’s been picking up or getting meals delivered by the district at least once a week since the pandemic started.

José Flor, who has one child in the district, said "it would have been difficult" to come up with enough food without the program.

"Could I have come up with the meals? Probably. But this just provided such a benefit, just made it much easier," he said.

Many families are also receiving benefits through the federally funded, state-administered Pandemic Electronic Benefits Transfer, or P-EBT, program the state announced it was extending last month.

Its aim is to provide cash for buying food through debit cards for families in the state’s food stamps program and other low-income households. It was initially in place from April through June of last year. Under the reauthorized version of the program, which will be retroactive to the beginning of the current school year, families will receive up to $6.82 per child for every day school was in session.

Recipients started receiving funding in late March and early this month, although the Milwaukee Journal Sentinel reported April 8 that as many as 78,500 students eligible for the program haven’t been getting benefits because the state Department of Public Instruction was having difficulty getting their addresses and because nearly 500 school districts haven’t responded to a survey asking whether classes are being held virtually or in person.

DHS spokesperson Jennifer Miller said addresses for more than 80% of those potentially eligible for the benefits have been verified.

DHS said in a March 12 statement announcing the program’s resumption that families "will get help feeding their children who usually get free or reduced-price meals at school but haven’t this year because of the pandemic," but later confirmed that even in districts that have been making meals available curbside or via delivery while school buildings were closed, families will still be eligible for the benefits.

"Handing out meals in that style does not impact a school’s P-EBT eligibility," DHS spokesperson Jennifer Miller said. "Students at that school who were given curbside meals can still receive P-EBT benefits."

DHS said it didn’t have a choice in how it structured the program.