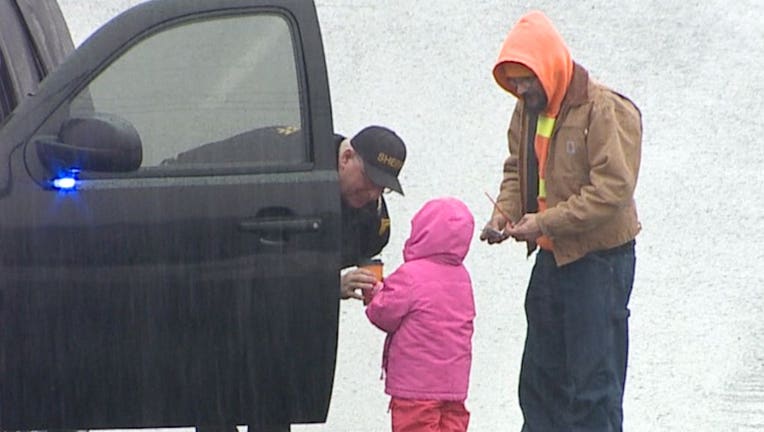 Izabel, 6, and her dad buy coffee for police at Jake Gutierrez's procession. Izabel said she wants to be come an officer. (Photo: Steve Kiggins)

With temperatures in the 30s Friday,  Mario and his 6-year-old daughter, Izabel, decided to buy coffee for officers manning a roadblock for the funeral procession as a simple way to say thank you, according to KCPQ-TV.

Speaking of police officers in general, Mario said, “There’s a good chance that they might not come home, they might not have Christmas or Thanksgiving with their families."

“This is totally important. Even if it wasn’t a snow day today, she wasn’t going to school," Woodworth said of Izabel. "She was going to be with me to show our respect."

Izabel said she sees a future in wearing a badge.

Many people braved the rain and cold in Tacoma to join police in honoring Jake Gutierrez. He was killed recently while responding to a domestic violence call when the suspect opened fire.

With lights flashing, hundreds of officers from across the county formed a procession for Gutierrez.

Dozens of neighbors also took time out of their day to also pay respects to a man who gave everything to protect their community.

“I’m here to say thank you and my tribute to them,” said Cole Nagel.

A pair of police officers from the Algona Police Department were also part of the procession.

Along the procession, people held their hands over their hearts and others saluted the 17-year Tacoma police veteran.

Friday’s procession was a painful reminder for a community in mourning for Gutierrez. Many said they were grateful for dedicated and brave officers like him who risk their lives to serve and protect.

For Woodworth, he said showing up to share his support was the least he could do.

“It’s just a little token of appreciation for what they do every day,” said Woodworth.