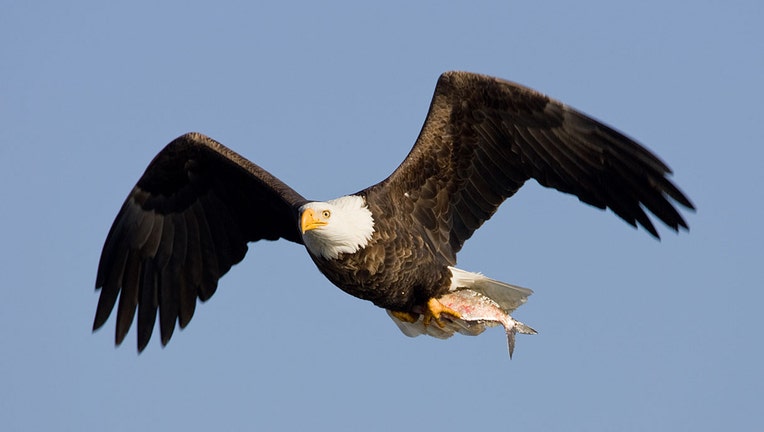 MADISON, Wis. - Bald eagles might still be soaring high in Wisconsin, but environmental regulators were grounded after the COVID-19 pandemic prevented an annual aerial survey of bald eagle nests for the first time in almost 50 years.

The Wisconsin Department of Natural Resources has conducted statewide aerial surveys since 1973, according to Jim Woodford, program manager for the DNR’s Bureau of Natural Heritage Conservation. State regulators say it’s one of the longest running surveys of its kind in the country.

"We were all set to go and then the pandemic happened," said Woodford.

The annual surveys typically take place from February through May, but the pandemic disrupted those plans due to the need for social distancing and new safety protocols to prevent the spread of the virus, Wisconsin Public Radio reported.

"They generally need to be done during that time frame because, for viewing purposes, we want to do it before the deciduous trees leaf out so we have the best visual look at the nests as we are flying by," said Woodford.

DNR pilots did conduct a few targeted surveys alone later in the spring and summer. But Woodford said the results aren’t as reliable because storms might impact nests or eagles might abandon them.

Bald eagle nests are under federal protection in the U.S. after the species was in danger of extinction decades ago. Nesting pairs of bald eagles dropped to less than 500 by 1963. The species was listed as endangered throughout most of the lower 48 states in 1978 while bald eagles were designated as threatened in Wisconsin.

The species was threatened with extinction due in part to DDT, a pesticide used to control mosquitos. Bald eagles ate fish contaminated with the pesticide, which contained a chemical that affected the viability of eggs. Habitat loss and poisoning from lead ammunition also played a role in the bird’s decline.

Since then, annual surveys have shown the number of occupied bald eagle nests in Wisconsin has grown from 107 in 1974 to 1,684 in 2019. The bird’s nesting range has also expanded from northern Wisconsin to every county in the state except Milwaukee County.

"We also use that information to help us make sure that the activities that we do, whether it be forest management, or lake shore home building, that we’re not impacting the birds," said Woodford. Woodford said they’re trying to remain flexible and continue to conduct work in the field.

"We are able to get some of these things done," said Woodford. "I hope we’ll we’ll be able to resume the necessary surveys this coming spring."

The county on Saturday announced changes to two testing sites, including a relocation.