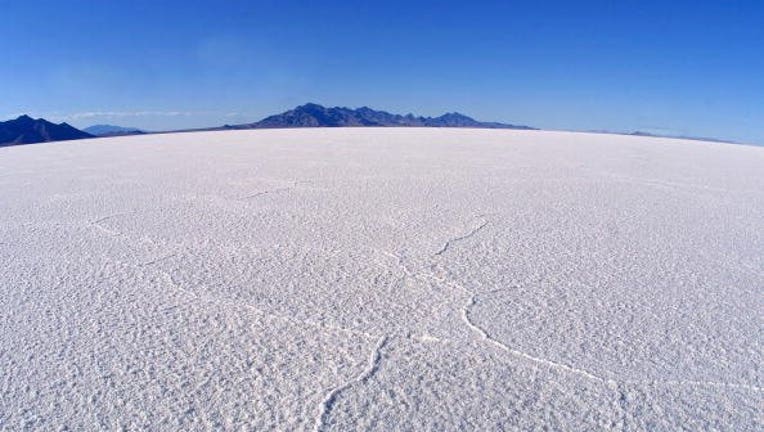 This Bonneville Salt Flats 100 miles west of Salt Lake City, Utah are the second largest in the world. There have been more land speed records set there then any place in the world. AFP Photo/ Georgre FREY (George Frey/AFP/Getty Images)

SALT LAKE CITY – When Laura and Bridger Hill started doing yard work at their home in Lehi, Utah, last September to prep for a retaining wall, the last thing they expected was to stumble across Ice Age-era remains.

But that's exactly what happened, with the couple telling the New York Times they were "shocked" to later find out the skeleton—which they initially thought belonged to a cow—unearthed beneath 7 feet of clay was that of a Pleistocene Era horse.

The horse skeleton is believed to be between 14,000 and 16,000 years old, paleontologist Rick Hunter tells Live Science, which notes it's rare to find horse remains in the Beehive State because it was underwater about 14,000 years ago, including under the prehistoric Lake Bonneville (a precursor to today's Great Salt Lake).

How this particular equine tumbled to the bottom of the lake that used to be on the Hills' property isn't clear, but Hunter theorizes the creature may have run into the water to escape a predator and then drowned, or perhaps perished in a nearby stream that eventually dumped its waters into the lake.

The erstwhile horse has been through some rough times: Landscaping machinery crushed its skull, some of its bones have been damaged from exposure, and spectators have messed around with it.

Hunter says the horse, of unknown gender, appears to be an older one that suffered from arthritis and had a cancerous growth on one of its legs.

Researchers plan to preserve the remains, then test them further, while the Hills decide whether to donate the skeleton to Lehi's Museum of Ancient Life. (This archaeological find was of a more gruesome nature.)

This article originally appeared on Newser: Couple Finds 'Cow' Remains in Yard—Except It's Not a Cow