AUSTIN, Texas – Leaders of a company behind a plan to cut some of its employees’ pay checks if the $2-trillion COVID-19 stimulus bill was approved have changed their mind.

The plan would’ve allowed the company to reduce paychecks by the amount of stimulus payment expected from the government.

Company leaders wanted those workers to sign what they called an “Employee Emergency Compensation Fund.”

The agreement would have also allowed the company to take 50% of the stimulus act’s $500 per child credit.

A worker who asked to remain anonymous sent KXAN a copy of the letter. The worker also asked that the company not be identified because he did not want any fallout over the company’s plan to negatively impact his co-workers’ ability to continue earning a living.

“While there was uncertainty about the federal government response, we also asked a small group of employees to reduce their compensation by an amount equal to any government support they received,” Russell wrote in the statement. “Our intentions were to serve the greater good and protect our most vulnerable employees. However, we understand our plan was ill-advised. We have rescinded the potential program, and we apologize for any pain or confusion it caused.” 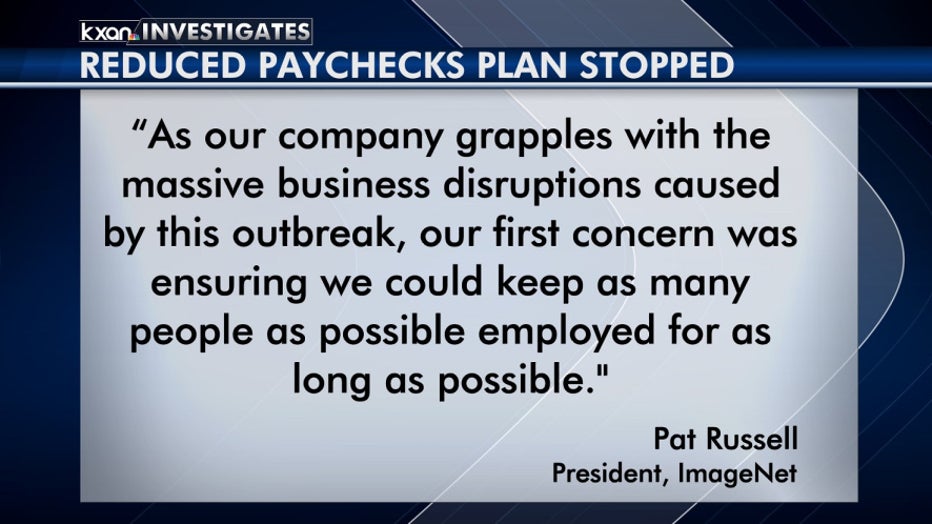 Russell said company leaders were  trying to figure out how to deal with what he called “massive business disruptions” related to the COVID-19 pandemic and the pay reduction plan was their way of “…ensuring we could keep as many people as possible employed for as long as possible. We implemented a series of steps to cut costs, including asking our top executives to forego their pay and capping all salaries at $75,000,” according to the statement.

Russell said the company would continue to “investigate all government programs which will help us weather this unprecedented and difficult situation,” the statement added.

ImageNet Consulting is based in Oklahoma City and has an office off West Braker Lane in Austin.

In the company’s pay reduction letter, it did not detail how the company would have determined the amount of payments each of the employees who signed the letter would receive. The company also reserved the right to continue the pay reductions “as many times as the government decides to make these types of distributions,” according to the letter provided to KXAN.

ImageNet Consulting, LLC did not include any details in the statement to indicate the company was looking at any other pay reduction plans directly related to the upcoming stimulus checks.