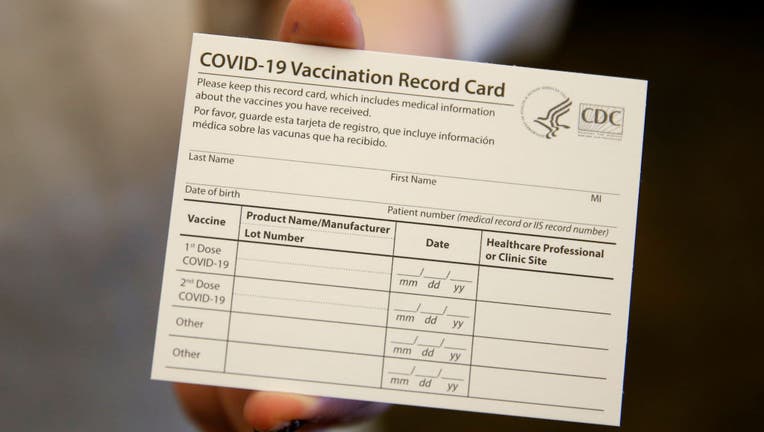 On Tuesday, 59-year-old Todd Anderson was booked on multiple charges for allegedly altering a medical record, forgery of a public seal, identity theft and conspiracy, a spokesperson for the California Department of Alcoholic Beverage Control (ABC) told FOX Business.

In April, ABC began investigating the Old Corner Saloon in Clements after receiving a complaint that fake cards were being sold at the bar, ABC said.

During the investigation, undercover agents were able to purchase the fraudulent cards "on multiple occasions in April," which is a violation of the California Penal Code, according to officials.

Agents then found "materials related to the distribution of fraudulent COVID-19 vaccination cards" after executing a search warrant of the property alongside the San Joaquin County Sheriff’s Office and San Joaquin County District Attorney’s Office.

Anderson was also found in possession of a loaded unregistered firearm, which is a felony, according to ABC officials.

Representatives for San Joaquin County Sheriff’s Office and the Old Corner Saloon did not immediately respond to FOX Business' requests for comment.

ABC will be "seeking a criminal complaint on another employee of the business" and plans to "file disciplinary action against the business." This may include suspending or revoking the bar of its liquor license, according to ABC.

"It is disheartening to have members in our community show flagrant disregard for public health in the midst of a pandemic," said San Joaquin County District Attorney Tori Verber Salazar. "Distributing, falsifying or purchasing fake COVID-19 vaccine cards is against the law and endangers yourself and those around you."

The FBI stressed similar concerns regarding the dangers of selling fake vaccine cards.

Earlier this year, the agency warned consumers to be wary of individuals selling fake vaccination record cards, which have been advertised on social media websites, e-commerce platforms and blogs.

"By misrepresenting yourself as vaccinated when entering schools, mass transit, workplaces, gyms, or places of worship, you put yourself and others around you at risk of contracting COVID-19," the FBI's notice reads. "Additionally, the unauthorized use of an official government agency's seal (such as HHS or the Centers for Disease Control and Prevention (CDC)) is a crime."

As people continue to navigate through the pandemic, the Medical College of Wisconsin hopes to learn about the impact COVID-19 has had on Milwaukee County residents.