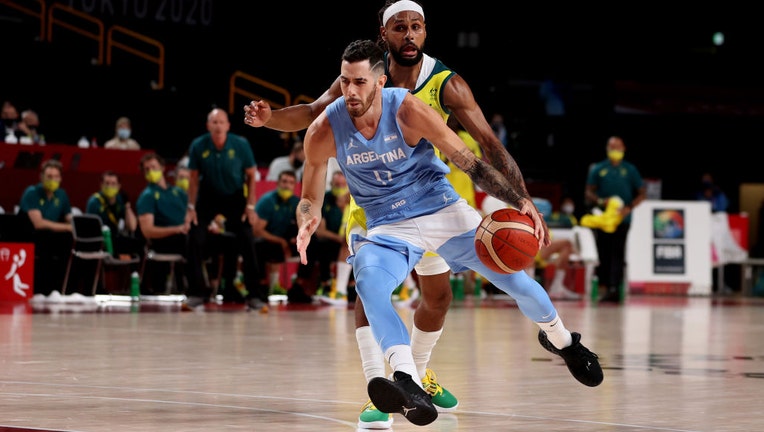 SAITAMA, JAPAN - AUGUST 03: Luca Vildoza #17 of Team Argentina drives to the basket against Patty Mills #5 of Team Australia during the first half of a Men's Basketball Quarterfinal game on day eleven of the Tokyo 2020 Olympic Games at Saitama Super

MILWAUKEE - The Milwaukee Bucks announced on Wednesday, April 6 that the team has signed guard Luca Vildoza.

A news release says Vildoza, a 26-year-old from Argentina, last played with Baskonia in the Spanish ACB League where he appeared in 228 games across four seasons with the club between 2017-21. In his most recent season with Baskonia in 2020-21, the 6-3 guard played in 62 games (32 starts) across EuroLeague and Spanish ACB play and averaged 10.6 points, 3.5 assists, 1.9 rebounds and 1.6 steals in 24.5 minutes per game.

Vildoza, who was named the Spanish ACB League Finals MVP in 2020 after leading Baskonia to the league title, also has five seasons of professional experience playing with Quilmes in the Argentinian Liga A between 2011-17. The Buenos Aires-native also played in two NBA Las Vegas Summer League games with the Knicks this past summer and spent part of this season’s training camp with New York before being waived on Oct. 3.

Vildoza will wear number six with the Bucks.

Brian is at Pleasant Valley Tennis & Fitness where their culture is all about creating a life-long rhythm of exercise, health and fun.

Doggy Day in the Deer District

Emilie Rackovan from Winston's Wishes joins FOX6 WakeUp with more on Dog Day on the Plaza in Deer District on Saturday, April 9.