SEATTLE -- A COVID-19 outbreak among the University of Washington’s Greek life students has infected at least 93 people. This comes after the state reported its second-highest day of new cases.

The Interfraternity Council, a student-led governing board for UW fraternities, reported that at least 117 residents living in 15 fraternity houses have self-reported that they tested positive for COVID-19. The university is still collecting and verifying the status of these cases, and this number might not reflect all positive cases, according to a news release.

The university provides a tracking website for all positive and presumptive positive cases throughout each of the university's three campuses.

A total of 145 people are presumptive positive and/or have been confirmed positive for the novel coronavirus. This includes faculty and students from Bothell, Tacoma and Seattle campuses.

The illnesses were reported among several dozen students living north of the Seattle-based university, according to a statement from the university.

"While we were pleased to see most of the houses had previously taken measures to reduce resident capacity by up to 50 percent this summer in response to COVID-19, those measures are not sufficient without vigilant, daily preventative measures, such as wearing face coverings, physical distancing and hand hygiene," said Dr. Jeffrey Gottlieb, chair of the UW Advisory Committee on Communicable Diseases, in the news release.

All of the Greek houses are off-campus, independent organizations, each with a respective governing board. The university does not have the authority to regulate the number of members allowed to live in each house, Michelle Ma, university spokesperson, wrote in an e-mail statement to Fox News.

Currently, there are about 1,000 students living in 25 fraternity houses in the neighborhood north of campus, according to a school news release. The residents of the houses were asked to quarantine or self-isolate, which means that those who have tested positive for COVID-19, those who have symptoms, and those who may have been exposed but are not showing symptoms are staying in their houses.

“What is occurring north of campus provides lessons for students as they consider their return to campus this fall. If everyone does their part to keep each other safe, we can continue to engage with one another and with our studies in the University environment by wearing face coverings and remaining physically distant,” Gottlieb said. “If we don’t, measures such as what are now required on Greek Row will be inevitable. My sense is all students want to return to some sense of normalcy, so I urge all of us to follow public health guidelines so we can do just that.” 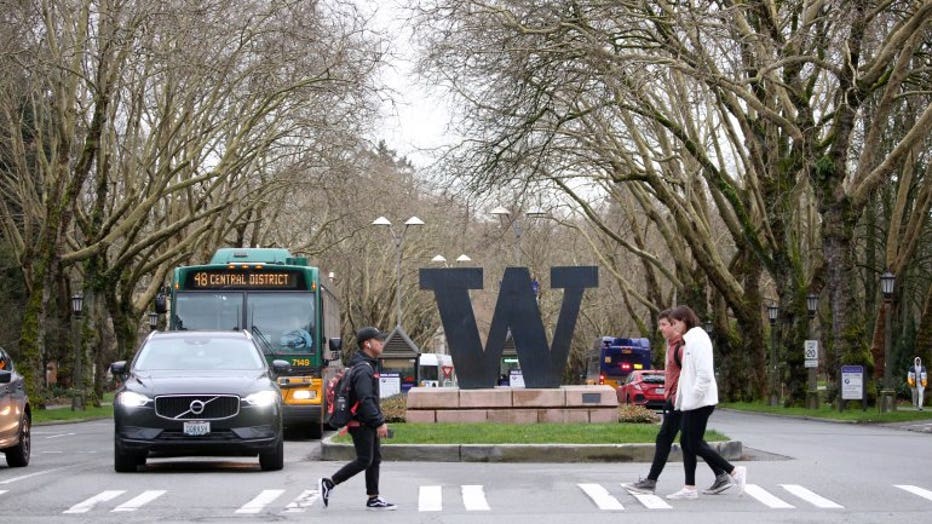 SEATTLE, WA - MARCH 06: Students at the University of Washington are on campus for the last day of in-person classes on March 6, 2020 in Seattle, Washington. The University will close starting Monday, March 9, as a precautionary reaction to the novel