MADISON (WITI/AP) -- Protesters were back out in the streets of Madison Wednesday, May 13th -- one day after Dane County District Attorney Ismael Ozanne announced no charges would be filed against Madison Police Officer Matt Kenny in the death of 19-year-old Tony Robinson. On Wednesday afternoon, some of those demonstrating were arrested. 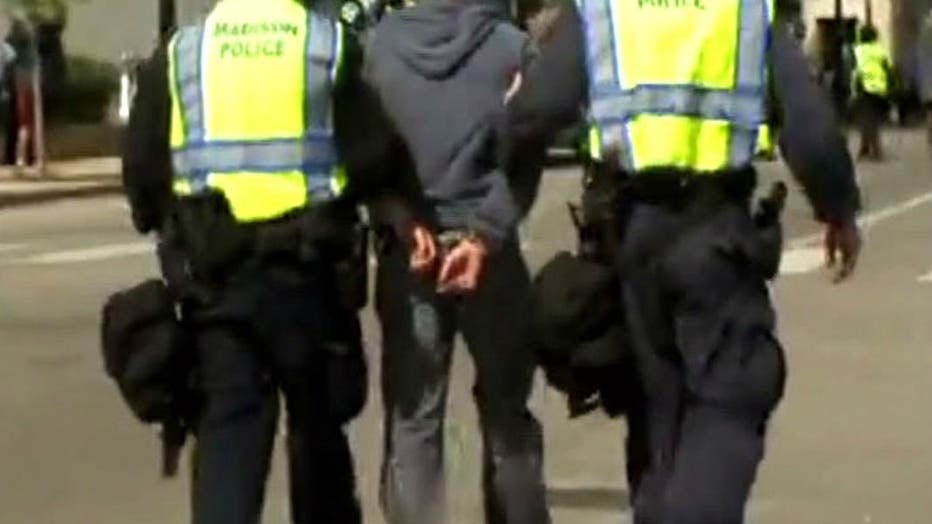 Robinson was shot and killed on Friday night, March 6th at an apartment home on Williamson Street in Madison. 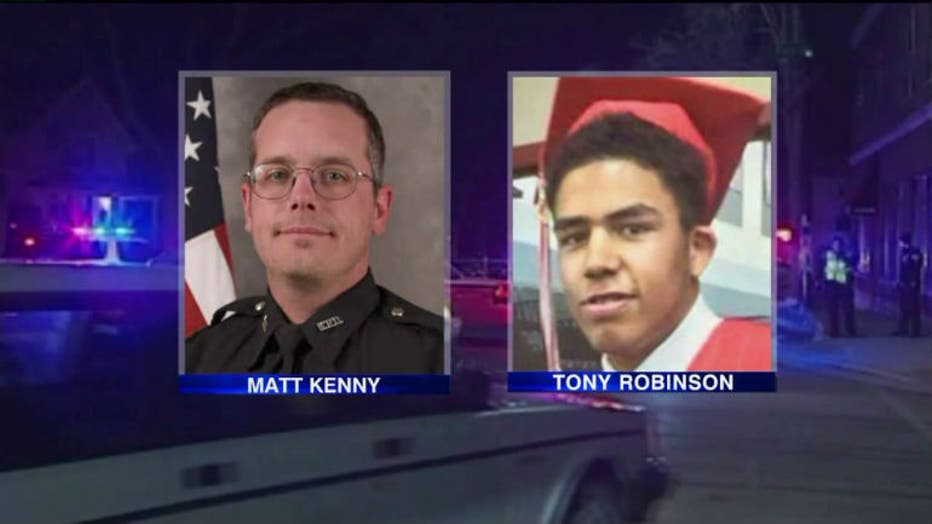 In his decision not to file charges against Kenny, Ozanne ruled this officer-involved shooting was justified -- but some say this was not justice, and they're not giving up.

"We aren't going anywhere. Justice for Tony doesn't end with the DA's decision," a demonstrator said.

Around 3:00 p.m. Wednesday, police made an announcement that streets needed to be cleared ahead of rush hour. Some protesters said they wouldn't move from the street, saying they were willing to be arrested -- and police did make some arrests.

Officers converged on about 20 protesters who refused to leave an intersection near the Capitol. The protesters linked arms as they were detained, and some cried. Some onlookers shouted insults, including racial epithets at the officers. 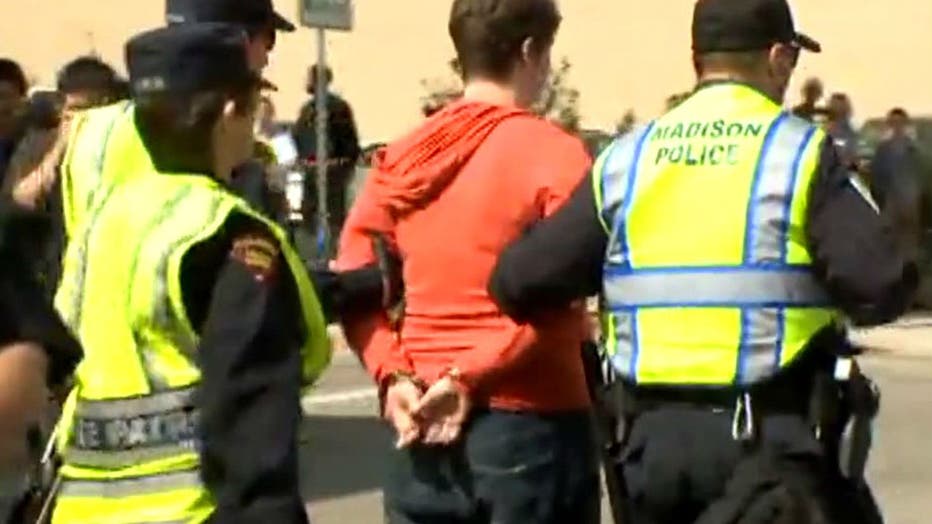 The Young, Gifted and Black Coalition has been keeping track of the arrests, and they said roughly 30 people were "willingly arrested" in the name of justice. A Madison Police Department spokesman said at least 25 people were arrested for obstructing an intersection near the Capitol. Almost all were released with a $124 misdemeanor fine.

Earlier Wednesday, people angry about Ozanne's decision not to charge Kenny for Robinson's death conducted a mock trial of the officer in protest.

The crowd cheered when actors said they would charge Officer Kenny.

Members of the Young, Gifted and Black Coalition, which has led protests since the officer-involved shooting, said the demonstration was intended to represent the processes they wished Ozanne had used.

Protesters said Wednesday Robinson's death demonstrates unequal policing, and they're calling for a shift in authority.

"We want the same type of policing that the white community has. We`re not anti-police, but we`re about being able to have a voice in how we police and what that looks like," Rev. Everett Mitchell with Christ the Solid Rock Church said.

"We are calling for community control over policing, which is not community review boards. We want power to hire and fire, set priorities, policies and procedures," Brandi Grayson with the Young, Gifted and Black Coalition said.

Records released by the Department of Justice show Robinson was high on psychedelic mushrooms, along with THC (marijuana) and xanax, and he had attacked multiple people on the evening of March 6th.

When he arrived at the apartment home on Williamson Street, Officer Kenny said he, too was attacked by Robinson -- after he entered the home and climbed the stairs.

District Attorney Ozanne said an audio recording from a responding officer captured seven shots fired in three seconds. All seven hit Robinson at “close range,” from front to back. Seven casings were recovered at the scene. Ozanne said all shots had to have been fired at the bottom of the stairs.

In all, Kenny was inside the home for about 20 seconds, Ozanne said.

Video shows Kenny exiting the home in a backwards motion -- appearing to nearly lose his balance. He was seen firing one shot (the seventh shot) while outside the home. Robinson’s feet appear in the doorway after Kenny was seen exiting the home. 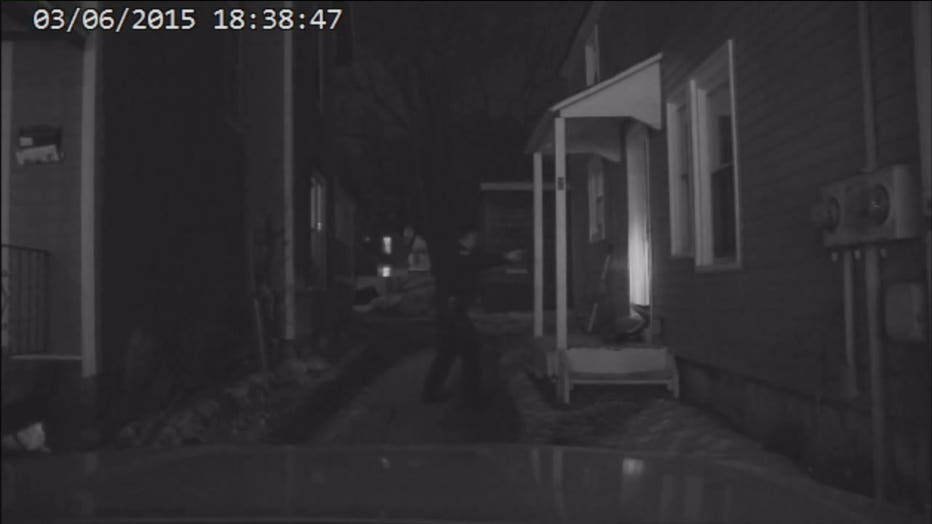 Protesters, including some from Milwaukee, say Kenny's fear was more perception than reality.

The Coalition for Justice has organized demonstrations in Milwaukee following the officer-involved shooting of 31-year-old Dontre Hamilton in Red Arrow Park last April.

After holding the mock trial outside the Dane County Courthouse and ruling to convict Kenny, the protesters marched to the jail -- blocking the entrance.

Then, there was a celebration of "the people's prosecution" -- a party that lasted longer than police would allow. One-by-one, officers arrested protesters who refused to leave the area.

This, as those demonstrating said this is only just the beginning, the first day of "Black Spring." They say there will be months of protest continuing through the summer -- until police no longer kill unarmed African-Americans.

A rally was set for downtown Milwaukee's Red Arrow Park on Wednesday evening, organized by the Coalition for Justice.