NEW YORK — Seven people are in custody after a savage machete attack left a 15-year-old New York City boy dead in what was an apparent case of mistaken identity.

Kevin Alvarez, 19, has been charged with second-degree murder, manslaughter, gang assault and assault in the brutal death of Lesandro “Junior” Guzman-Feliz. He pleaded not guilty Monday evening. Six other suspects were being held in Paterson, New Jersey Monday, awaiting an extradition hearing.

WPIX first reported Sunday that multiple people were taken out of an alleged gang stronghold on East 24th Street in Paterson.

They are suspected of being members of the Trinitarios gang.

Their extradition to New York could happen as early as Tuesday.

Paterson, New Jersey police first received a tip at about 1:45 p.m. Sunday. They sent a large contingent of cops and found four people tied to the attack of Lesandro “Junior” Guzman-Feliz who were holed up at a house on East 24th Street in Paterson, a source told WPIX. 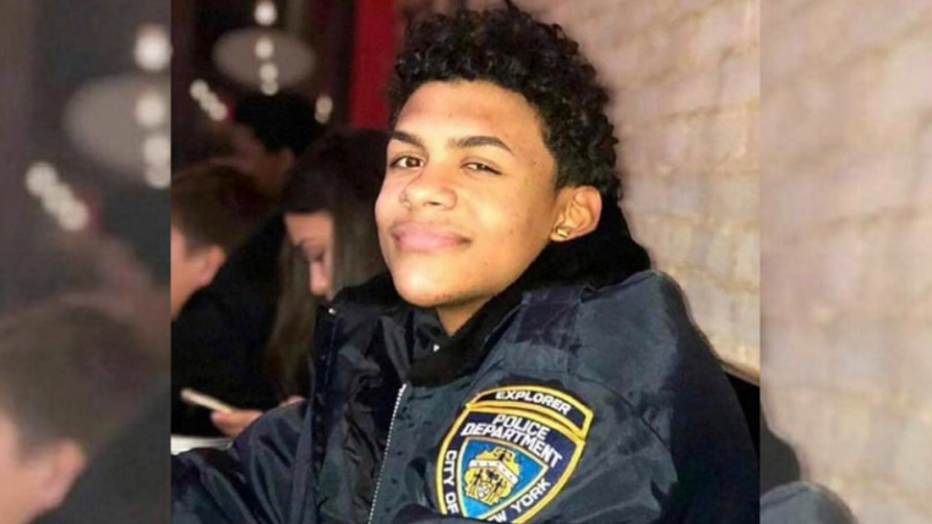 When authorities went to the house, one suspect managed to escape but was apprehended minutes later, according to WPIX.

Another suspect was taken into custody in the Dominican Republic, a source said.

The leader of the Trinitarios gang apologized on Facebook, saying the vicious murder resulted from a case of mistaken identity.

Guzman-Feliz was dragged out of a bodega at East 183rd Street and Bathgate Avenue and hacked to death with a machete on Wednesday night following a dispute with a group of males, officials said.

A source told WPIX that one gang member was angry because a relative was featured in a sex video and thought Guzman-Feliz was in the video.

Guzman-Feliz's death sent shockwaves through the community, and on social media, as the hashtag #JusticeforJunior began trending. Rapper Cardi B, a Bronx native, was among those paying tribute, posting on Instagram about getting justice for the teen.

A GoFundMe page has been set up by Guzman-Feliz' family to help with funeral costs and other financial difficulties. To donate, visit Justice For Junior.

The mother of the 15-year-old gang-attack victim spoke out Monday as thousands gathered to pay respects to her son at his wake.

"My heart is broken. He was a sweet kid with a very good heart," Feliz said.

His father also spoke out about Junior's  dream to become a police officer.

He showed a tattoo that he got on his left hand in honor of his slain child — a picture of his son's face with the letters "R.I.P" written below.

"I need justice for my son," Feliz said. "That's my Junior baby."

The wake outside R.G. Ortiz Funeral Home on Southern Boulevard has drawn thousands of mourners, who paid respects in diverse ways. One group released a set of white balloons into the sky while shouting "Junior!"

On a block where gang violence was part of life, Junior was one of the good kids.

"He wanted to be a detective," said Danny, one of Junior's neighbors. "It's messed up what they did to him. We watched him grow up."

Mayor Bill De Blasio on Monday said he wants to find a way to honor the teen in a lasting way. He spoke to Guzman-Feliz’ mother on Sunday night and wants to work with her to figure out the best way to honor him.

“What hurts me the most is the notion that this was a young man who wanted to serve our city, be a part of our police force and had such a bright future now is taken from us,” de Blasio said.  “It feels very personal to have lost an exemplary young man.”