At least 1.2 million people watched the Adventure Park's YouTube streaming of the event . A logo on the feed quickly changed from ToysRUs to BabiesRUs following the birth.

Animal Adventure Park owner Jordan Patch said that both mom and calf were doing fine after the birth.

Patch said the calf's entrance into the world "was unnerving to even those of us who have witnessed animal births previously."

"Giraffes give birth standing up, which means when the calf is ready to be born, it exits its mother hooves first from six feet off the floor, making for a very exciting event," Patch said in a news release.

This is April's fourth calf, but Animal Adventure Park's first giraffe calf. The proud papa, a five-year-old giraffe named Oliver, watched from an adjacent pen. This is his first offspring.

Now for the fun part! Naming the giraffe calf! Animal Adventure Park is encouraging people to submit your vote along with a $1 donation and the funds will be split.

The privately owned zoo began livestreaming from April's enclosure in February. People around the world have been tuning in daily. 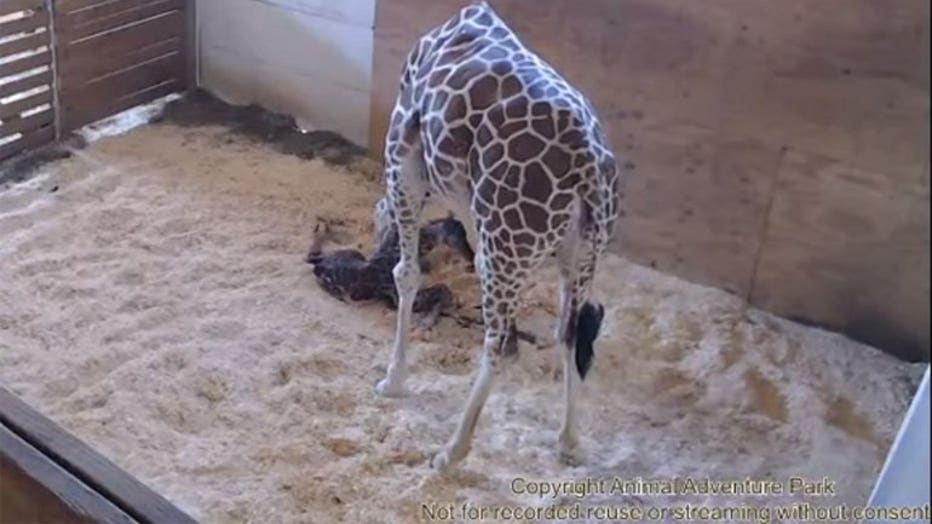 April has her own website and even an apparel line. A GoFundMe fundraiser page that initially set a goal of $50,000 sat at more than $125,000 on Saturday morning. The money will be used for the care of the animals.

The park's livestream was briefly interrupted in February when YouTube pulled the feed after someone reported the images contained explicit material and nudity. Jordan Patch, owner of the Animal Adventure Park, blamed "a handful of extremists and animal rights activists" for the interruption.

The wait for the giraffe became an anxiety-ridden experience for some. A Farmington, New Hampshire, songwriter even posted a music video on YouTube called, "I'm Going Crazy Waiting (For A Giraffe)."

The reaction on Twitter was ebullient and hopeful: "We did it, internet! We had a giraffe baby together;" ''Everybody sticking their neck out for this baby giraffe;" and "On a day where "mother of all bombs" is a trending phrase, I love how the world unites over the birth of a baby giraffe."

Animal Adventure Park is currently closed to the public and will open in mid-May.