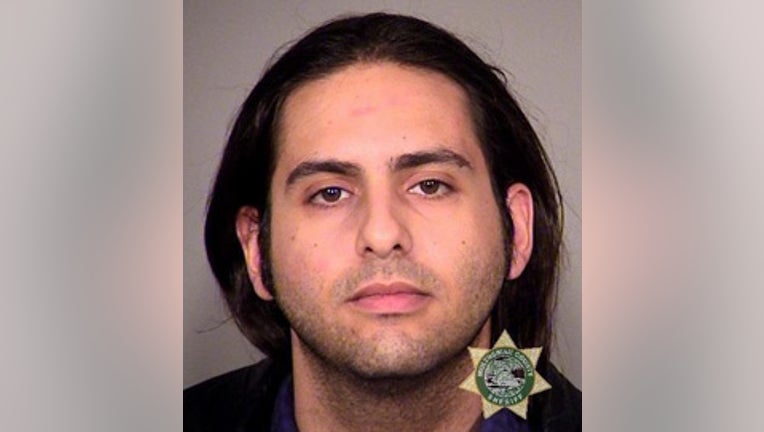 (CNN) -- An airline passenger who made "unusual statements" and attempted to open an emergency door during a flight Monday morning has been charged with interfering with a flight crew, a federal official said.

Passengers and crews members restrained the man and the flight landed safely.

The incident occurred on Alaska Airlines Flight 132 to Portland, Oregon, from Anchorage, Alaska. Around 5:20 a.m. Pacific Time -- about 10 minutes before the flight was to land -- the passenger, seated in Row 17, allegedly tried to open the emergency door, airline spokeswoman Bobbie Egan said.

Emergency doors are locked and cannot be opened during flights.

"Once the passenger was restrained he sat calmly in the seat for the short duration of the flight," Egan said.

Upon arrival, he was detained by police, she said. No one was hurt in the incident.

The FBI identified the passenger as Alexander Herrera, 23. FBI spokeswoman Beth Anne Steele issued a statement saying passengers and crew members said the man "made unusual statements prior to the incident," but she declined to reveal the nature of the statements.

Herrera is being booked into the Multnomah County (Oregon) Detention Center, and will likely make his initial appearance on Tuesday before a federal magistrate in Portland, Steele said.