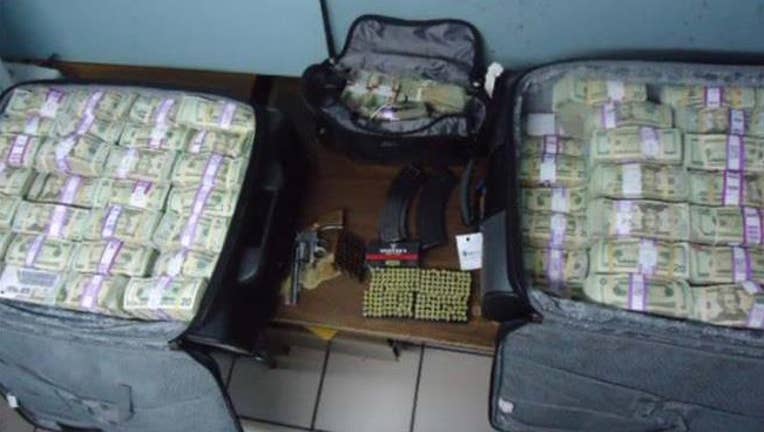 The cash was discovered at a checkpoint in Mexico. (US Attorney's Office)

He worked there as the bank's cash vault services manager and was aware of the security setup—which didn't include armed guards. And so a plan was born: In July 2011, he enabled the ability for one person to access the bank's vault; on July 28, he took $30,000 from it to pay for a chartered plane that would take him to Seattle, where his girlfriend was waiting for him.

The following day he worked late under the ruse of cleaning up after an ice-cream event he had planned for customers, reports KTVA. He entered the vault, stuffed three boxes with $4.3 million over the course of 20 minutes, rolled them on a cart to his car, and began his journey to Mexico. He would get there—and go directly to jail. How his wild heist fell apart:

Upon arriving in Washington, Cazarez bought a Ford Fusion and spent $4,000 on an AK-47 and a handgun. The DOJ says in a press release that he mailed cellphones belonging to him and his girlfriend to Florida and New York to throw investigators off their trail.

By the time investigators caught wind of what had happened, Cazarez planned to be in Mexico: He had set a timer on the bank vault that would prevent it from being opened for six days. But he was felled by a random search of his luggage when the bus he was on from Tijuana to Sonora was stopped at a checkpoint.

Mexican authorities found $3.8 million in his luggage and charged him with "criminal offenses analogous to money laundering and illegal possession of firearms" for taking the cash and guns into Mexico, per the DOJ. He served a seven-year term and was then extradited to the US, where he was on Monday sentenced to a 10-year prison term, with no credit for time served in Mexico. The New York Times in 2018 reported he faced a sentence of up to 30 years.

The Washington Post reports that in asking the judge to go easy on him, the 34-year-old wrote, "I obviously suck at being a criminal and know that any illegal activity will land me back in prison." But Chief US District Judge Timothy Burgess took issue with what he perceived as Cazarez's less-than-forthcoming attitude when it came to $500,000 of stolen money that remains missing. The DOJ alleges there's evidence it was hidden in Washington as part of a "fail-safe plan." Cazarez says he gave the money to his father, who has since died, to pay for medical care, but that it was stolen from him.

As far as motive, Cazarez told the judge that he took the money to help his dad. Prosecutors alleged he was fearful his position was about to be cut and he would be out of a job, and hatched the robbery scheme as a result.