ISRAEL -- A 6-year-old boy in Israel has discovered a 3,500-year-old clay tablet depicting an ancient captive and his captor.

Imri Elya found the tablet during a hiking trip to the Tel Jemmeh archaeological site in the Negev desert with his parents, according to the Times of Israel. He picked up the small clay object and showed it to his parents, who contacted the Israel Antiquities Authority. Officials at the Israel Antiquities Authority then handed the artifact to the country’s National Treasures Department. 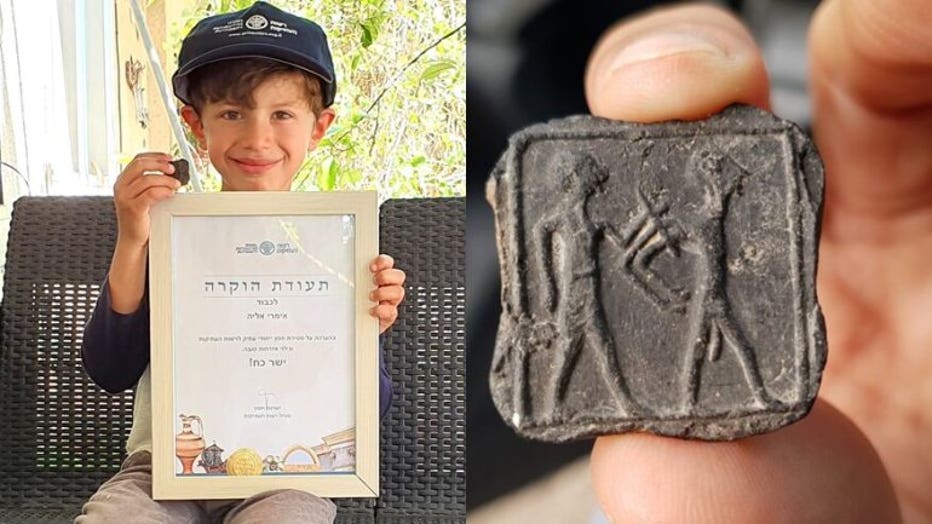 The tablet, thought to be from the ancient Canaanite civilization, depicts a captor leading a naked captive. Experts note that at the time the tablet was created, the Egyptian Empire ruled the land of Canaan, which was composed of “city-states” ruled by local kings. Some 3,500 years ago, the region was riven with conflict between the Canaanite kings.

"The artist who created this tablet appeared to have been influenced by similar representations known in Ancient Near East art,” said archaeologists Saar Ganor, Itamar Weissbein and Oren Shmueli of the Israel Antiquities Authority in a statement emailed to Fox News. “The manner in which the captive is bound has been seen previously in reliefs and artifacts found in Egypt and northern Sinai."

Imri received a certificate of good citizenship from the Israel Antiquities Authority.

Israel continues to reveal new aspects of its rich history. Hidden underground chambers dating back 2,000 years, for example, were recently discovered near the Western Wall in Jerusalem.

In another project, an Iron Age temple complex discovered near Jerusalem is shedding new light on an ancient Biblical city.

Last year, the room in Jerusalem venerated as the site of Jesus’ Last Supper was revealed in stunning detail thanks to remarkable 3D laser scanning technology.

Read more on this story at FOXNews.com.