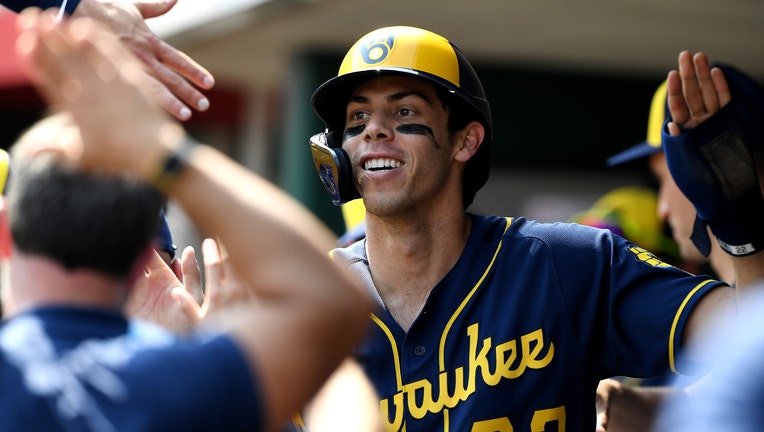 Christian Yelich of the Milwaukee Brewers celebrates in the dugout after hitting a triple for a cycle in the ninth inning during a game against the Cincinnati Reds at Great American Ball Park on May 11, 2022 in Cincinnati. (Photo by Emilee Chinn/Gett

CINCINNATI - Christian Yelich hit for a record-tying third cycle – all of them against Cincinnati – but the Milwaukee Brewers' rally fell short in the ninth inning in a 14-11 loss to the Reds on Wednesday.

Tyler Stephenson drove in four runs with a pair of doubles and Colin Moran hit a three-run homer for Cincinnati. The Reds, with the worst record in the majors, won their second straight series by topping the NL Central leaders.

Yelich became the sixth player in major league history to hit at least one home run, triple, double and a single in the same game on three separate occasions. He joined Trea Turner, Adrián Beltré, Babe Herman, Bob Meusel and John Reilly in accomplishing the feat.

Yelich doubled in the first, hit a three-run homer in the third, singled in the fifth and tripled during a six-run ninth.

Tyler Naquin hit a bases-loaded triple for Cincinnati, which led 7-0 after two innings. Moran homered during a six-run eighth that made it 14-5.

Milwaukee's first six batters reached base in the ninth, including home runs by Jace Peterson and pinch-hitter Mike Brosseau. Joel Kuhnel relieved and gave up a pair of RBI doubles while getting the final three outs.

Reds starter Vladimir Gutiérrez allowed four runs and six hits over 4 2/3 innings. The right-hander exited with a four-run lead and the bases loaded in the fifth, and Alexis Diaz (1-0) came in and struck out Luis Urías.

Adrian Houser (3-3) made it through four innings. He gave up six hits and seven runs, four of them unearned because of two infield errors. Reliever J.C. Mejia was charged with five runs in the Reds' eighth-inning outburst.

The Reds scored four in the first on Stephenson's RBI double and Naquin's bases-loaded triple off the center-field wall that came about a foot short of being a grand slam.

The Reds loaded the bases again in the second. After Houser fanned Mike Moustakas for the second out, Stephenson struck again, driving in all three in with a double to left.

Tommy Pham drove in two more runs for the Reds in the eighth with a bases-loaded single, followed by an RBI single by Moustakas to cushion the lead.

Brousseau and Peterson homered off Dauri Moreta in the ninth.

Reds: LHP Mike Minor (shoulder) is scheduled to make his second rehab start at Triple-A Louisville on Sunday. He could make his season debut next week. ... Manager David Bell said OF Jake Fraley (knee inflammation), 1B Joey Votto (illness) and OF Nick Senzel (illness) all are getting close to rehab assignments.