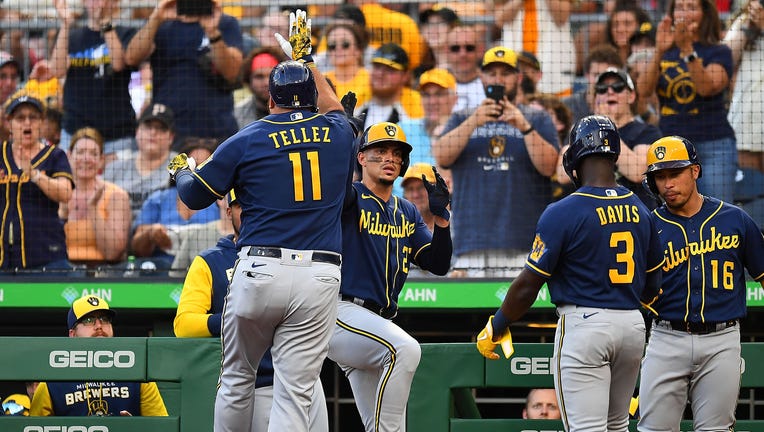 Rowdy Tellez celebrates his three run home run with Willy Adames of the Milwaukee Brewers against the Pittsburgh Pirates at PNC Park on July 1, 2022. (Photo by Joe Sargent/Getty Images)

PITTSBURGH - Rowdy Tellez homered for the fifth time in five games and drove in five runs, Corbin Burnes took a no-hit bid into the sixth inning and the Milwaukee Brewers routed the Pittsburgh Pirates 19-2 Friday night.

Willy Adames hit a grand slam as the Brewers connected five times for home runs. They also had five doubles among their 16 hits.

The NL Central-leading Brewers won for the fifth time in six games and are 7-1 against the Pirates this season. The Pirates have lost six of eight.

Tellez’s homer was a three-run shot to right-center field that capped a seven-run second inning against rookie Roansy Contreras (2-2). Tellez also had a two-run double in the fourth to push the Brewers’ lead to 9-0.

Burnes’ no-hit bid was broken up on a double to deep center field by rookie Bligh Madris with one out in the sixth.

The reigning NL Cy Young winner was lifted after the sixth inning as his control was shaky. Though Burnes (7-4) allowed only one run on one hit, he walked four, hit a batter and threw a wild pitch while striking out five.

Burnes has a 2.03 ERA while winning his last four starts and is 6-0 lifetime against the Pirates.

Tellez hit one of three home runs by the Brewers in the second.

After Kolten Wong had an RBI double, Luis Urias hit a two-run drive. One out later, Keston Hiura had a solo shot into the left-field bleachers. Tellez capped the inning with a 406-foot shot.

When Tellez hit his two-run double in the fourth, it was his ninth straight hit for extra bases.

Andrew McCutchen had his second straight three-hit game for the Brewers.

Contreras was rocked for seven runs in 1 2/3 innings. He gave up five hits, walked two and struck out one.

In his other seven starts this season, Contreras had allowed no more than three runs.

Brewers: RHP Adrian Houser was placed on the 15-day injured list with a flexor strain in his right elbow and RHP Trevor Kelley was recalled from Triple-A Nashville. Houser left Thursday’s loss to the Pirates in the third inning when he felt tightness in the elbow, but the team is hopeful he can resume throwing within two weeks. Houser had Tommy John surgery in 2016 and missed two full seasons. … CF Jonathan Davis (back/ribs) returned to the lineup two days after being shaken up while making a diving catch in a win at Tampa Bay.

Brewers: LHP Aaron Ashby (1-5, 4.25) is expected to be activated from the IL to start Saturday. He has been sidelined since June 17 with left forearm inflammation.

Pirates: Manager Derek Shelton had not decided on a starting pitcher for Saturday prior to Friday’s game, though one option is recalling RHP Bryse Wilson (0-4, 8.29) from Triple-A Indianapolis.