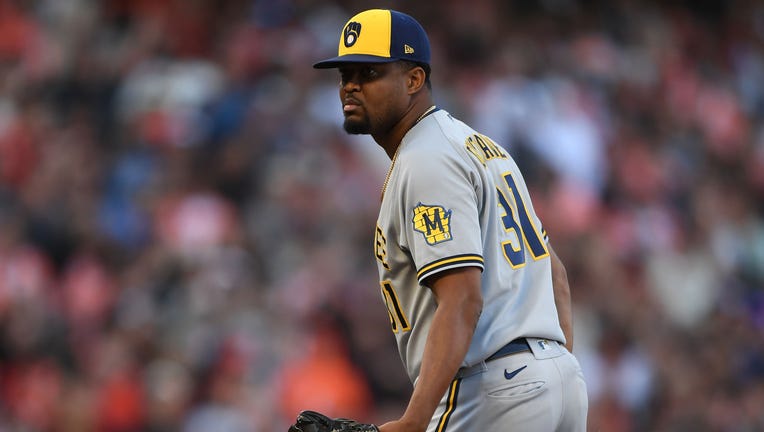 Jandel Gustave of the Milwaukee Brewers reacts after being called for a balk against the San Francisco Giants in the bottom of the eighth inning at Oracle Park on July 16, 2022 in San Francisco. (Photo by Michael Urakami/Getty Images)

Gustave replaced Brent Suter (1-3) with two on and two outs. After hitting Evan Longoria with a pitch to load the bases, Gustave got ahead of Mike Yastrzemski and had a 1-2 count when home plate umpire Pat Hoberg called a balk as a sold-out Oracle Park crowd roared.

Dominic Leone earned his second save when he got Kolten Wong to strike out looking to end the game after the Brewers put the tying run on third in the ninth.

Omar Narvaez had a sacrifice fly for Milwaukee. The Brewers' lead in the NL Central fell to one game over St. Louis.

One day after the Giants hit three home runs off Brewers closer Josh Hader in the ninth inning, including a walk-off grand slam, Alex Cobb and Eric Lauer kept both offenses in check until Ruf’s second home run in two days.

The Giants first baseman, who homered in the ninth inning on Friday, crushed a 2-2 pitch from Lauer into the left field stands with two outs in the sixth.

Milwaukee tied it on Narvaez’s sacrifice fly in the eighth that plated Hunter Renfroe. Renfroe doubled leading off the inning and took third when Yastrzemski bobbled the ball.

Lauer allowed two hits over seven innings. He walked three and struck out four. Cobb, winless since May 17, pitched four-hit ball and had five strikeouts in 7 1/3 innings.

Second try not a charm

Jonathan Davis caught a break in the eighth inning when he stole second base and the Giants failed in their attempt to have it overturned by replay. But Davis was thrown out when he tried to take third with left-handed hitting Christian Yelich batting.

Brewers: OF Tyrone Taylon, out since July 2 while in concussion protocol, began a rehab assignment with Triple-A Nashville. … RHP Chi Chi Gonzalez cleared waivers and elected free agency after being designated for assignment earlier in the week.

Giants: 3B Evan Longoria returned from a rehab assignment and was reinstated from the Injured List. RHP Jacob Junis also returned from the IL. … SS Brandon Crawford was placed on the 10-day IL with right knee inflammation. RHP Mauricio Llovera was put on the 15-day IL with a right flexor strain.

Giants RHP Logan Webb (8-3, 2.82 ERA) and Brewers RHP Jason Alexander (2-1, 4.73) take the mound Sunday in the final game for both teams before the All-Star break. Webb has allowed one run over his previous two starts covering 14 innings. Alexander is allowing opponents a .314 average over nine games this season.