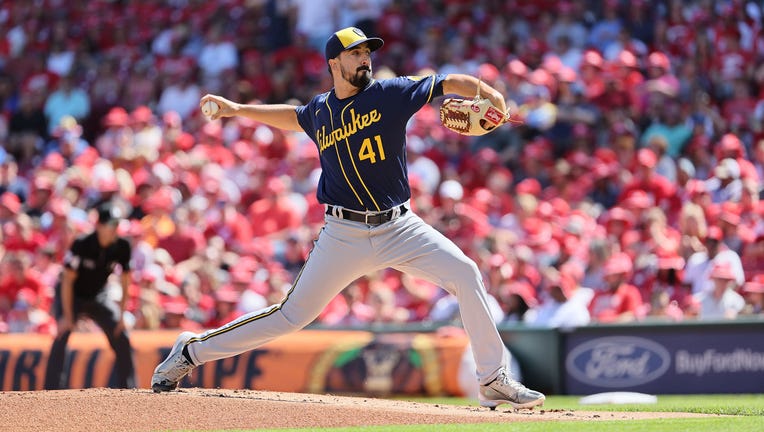 Jason Alexander of the Milwaukee Brewers throws a pitch against the Cincinnati Reds at Great American Ball Park on June 18, 2022. (Photo by Andy Lyons/Getty Images)

Jace Peterson drove in two runs with a sixth-inning double on a chopper over the head of leaping first baseman Mike Moustakas, and Milwaukee won a second straight game for the first time this month.

The roller-coaster Reds have lost three straight after a three-game winning streak, which followed a four-game slide.

Alexander (1-0) allowed one unearned run through five innings of his fourth start before giving up four hits and two runs in the sixth. Overall, he allowed eight hits and three runs, two earned, with one walk and two strikeouts in 5 2/3 innings.

Miguel Sánchez inherited runners on first and third with two outs and got pinch-hitter TJ Friedl to pop out. Trevor Kelly pitched a hitless 1 2/3 innings before Hoby Milner got the final four outs.

Adames gave the Brewers a 3-0 lead with a two-run home run in their three-run third inning, his team-high 13th homer this season..

Renfroe led off the seventh with a shot over the left field wall against Luis Cessa.

Brewers: RHP Brandon Woodruff (right ankle sprain, Raynaud’s syndrome) was scheduled to throw about 50 pitches in his first rehab appearance for Triple-A Nashville at Memphis on Saturday. ... 2B Kolten Wong (right calf) suffered what manager Craig Counsell described as a "little bit of a setback," which is likely to keep Wong from being activated as hoped for Monday’s start of a homestand.

Reds: LHP Nick Lodolo (low back strain) was scheduled to throw 50-55 pitches in a rehab start for Triple-A Louisville at Durham on Saturday. ... After sitting out Friday’s Louisville game, INF Donovan Solano (left hamstring strain) was seven games into his rehab assignment. Solano was hitting .333 (7 for 21) with three doubles and two RBIs over five starts at third base and two as designated hitter.

Reds: LHP Mike Minor (1-2) is making his fourth start since coming off the injured list. He is 4-2 with a 2.20 ERA over seven career starts against the Brewers.