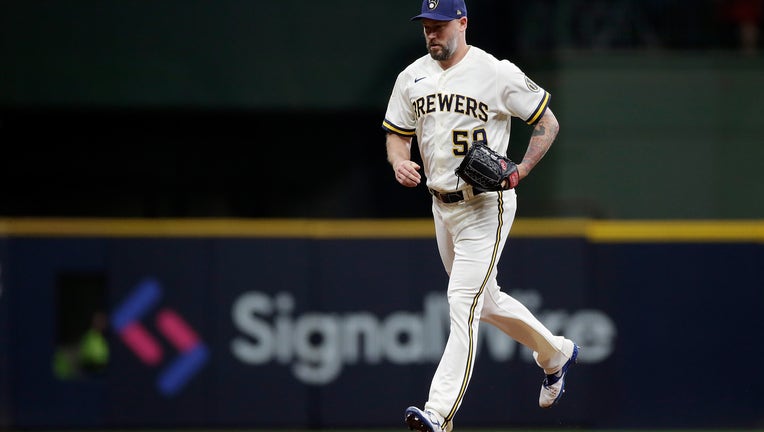 MILWAUKEE, WISCONSIN - AUGUST 02: John Axford #59 of the Milwaukee Brewers enters the game in the ninth inning against the Pittsburgh Pirates at American Family Field on August 02, 2021 in Milwaukee, Wisconsin. Brewers defeated the Pirates 6-2. (Phot

MILWAUKEE - The Milwaukee Brewers’ pitching staff has taken a couple more hits with John Axford now out for the season with elbow trouble and Eric Lauer joining the team's growing COVID-19 injured list.

Brewers manager Craig Counsell said Axford has significant elbow damage and is going over his options after an injury foiled the 38-year-old’s comeback attempt.

"He was climbing a tall hill," Counsell said. "What he was doing was really hard to do. He got really far up the hill and then the last part just ended up being too tough."

The former Brewers closer retired just one of the five batters he faced Monday before leaving with elbow pain in his first major league appearance since 2018.

Axford played for the Brewers from 2009-13 and still owns the franchise’s single-season saves record with 46 in 2011. He started this season on the Toronto Blue Jays’ broadcast crew but signed a minor league contract with them after pitching well for Team Canada in an Olympic qualifier.

The NL Central-leading Brewers acquired Axford on Monday and used him in the ninth inning of a 6-2 victory over the Pittsburgh Pirates. That’s when Axford’s elbow started giving him problems.

Lauer started Monday’s game and threw five shutout innings to continue his solid season. He has allowed just five runs over his last 31 1/3 innings but now must sit out at least 10 days due to his positive test.

Yelich could return in time for this weekend’s series with the San Francisco Giants.

"I’m looking forward to the day when we can get these guys back, for sure," Counsell said.

The Brewers added right-handed pitcher Sal Romano to the active roster after claiming him off waivers from the New York Yankees.

Rowdy Tellez launched a three-run homer with two outs in the seventh inning to put the Brewers ahead for good in a 4-2 victory over the Pirates.

Packers' Rodgers: Relationship with GM, a 'work in progress'