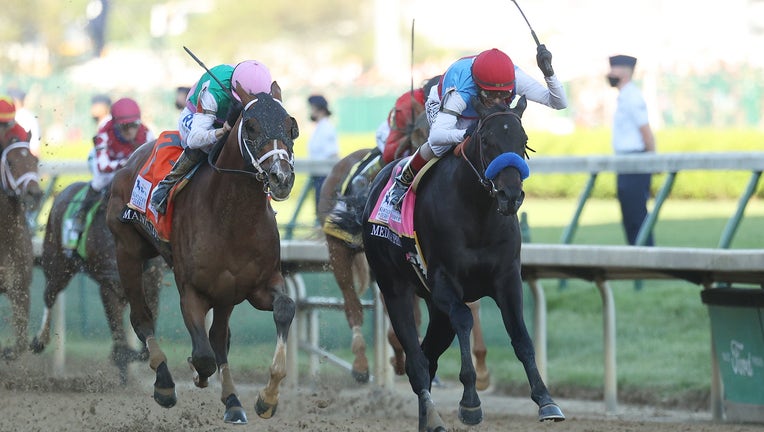 Medina Spirit #8, ridden by jockey John Velazquez, (R) crosses the finish line to win the 147th running of the Kentucky Derby ahead of Mandaloun #7, ridden by Florent Geroux, at Churchill Downs on May 01, 2021 in Louisville, Kentucky. (Photo by Rob C

As it did with much of the sports world, the COVID-19 disrupted the 2020 race. Instead of being held in its usual slot last spring, organizers moved it to Sept. 5, and Authentic took the crown.

Not surprisingly, that race was held without fans. And the festivities that lead up to the first leg of the Triple Crown — like a marathon and cycling race — had to take place virtually.

But this year, America’s recovery from the pandemic has emboldened organizers to welcome fans along with all the events they’d come to expect.

The Thunder Over Louisville air show and fireworks display kicked off Derby week last weekend. The running and cycling races took place in person. And thousands of yellow duckies bobbed along the Ohio River in the "Ken-Ducky" derby.

"It definitely smells like Derby," Louisville native Kenzie Kapp told the Associated Press. "In the fall, it was different. It’s so good to be back on the first Saturday of May. That feels good. It feels right. It feels at home."

Churchill Downs will operate at up to 60% capacity in some places, and between 40% and 50% in others. Attendees in the traditional decorative hats and fancy suits will be welcomed back to the grounds — so long as they’re also wearing a face covering.

Though thousands of spectators gathered in the infield were seen not wearing face masks. Hundreds stood in lines that were not spaced out to use ATMs or buy food. Unlike some Derby tickets this year that are all-inclusive, infield tickets don’t include drinks or food, so fans have to use cash to make purchases.

A recording played over a loudspeaker at the entrance said guests are required to wear masks over their mouths and noses. Ticket takers reminded people coming in the front gate: "Please have your mask on! Masks on! Masks on!"

A sign posted indoors by the wagering windows reminding spectators to wear masks largely went ignored. Others had masks pulled down covering their chins.

Sydney Lowe of Columbus, Ohio, said she and her friends were fine with not wearing masks because they were outside and had been vaccinated.

"We’re outside, I feel like it’s not that big a deal," Lowe said.

Nonetheless, the crowd will get to see the biggest horse race of the year, which is set to begin at 6:57 p.m. ET on NBC. And experts believe Saturday’s favorite is a Triple Crown contender.

Essential Quality is a colt that comes into the Derby undefeated in five career races. He was last year’s 2-year-old champion and winner of the Breeders' Cup Juvenile.

And he won the Blue Grass Stakes over Derby foe Highly Motivated.

"He's a solid, solid horse, hasn’t missed a beat," Essential Quality's trainer Brad Cox told the Associated Press. "He's a very classy horse. He knows when to turn it on and off."

To win the Triple Crown, Essential Quality will have to finish first in the Derby, win the Preakness Stakes on May 15 and then win the Belmont Stakes on June 5.

The daunting task has only been accomplished 13 times in the history of American thoroughbred racing. The last time came in 2018 when Bob Baffert's horse Justify won all three races.

Three years earlier, another one of Baffert’s horses — American Pharoah — won the Triple Crown, the first horse to do so in 37 years.

But even Baffert believes Essential Quality will win on Saturday.

"To me, it's Essential Quality's race," the six-time Derby winner said.

This story was reported from Atlanta. The Associated Press contributed