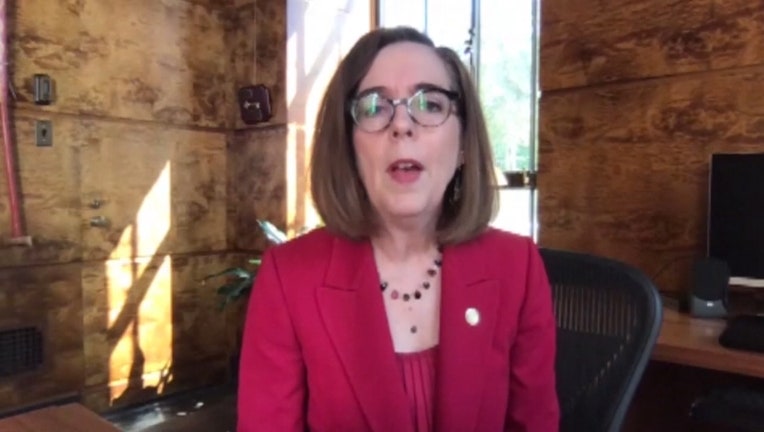 PORTLAND, Ore. - The Oregon National Guard was directed to place its members on standby ahead of potential election unrest in Portland, Gov. Kate Brown announced Monday.

Brown said she is also exercising her executive authority to create a joint incident command structure in Portland, with the Oregon State Police and the Multnomah County Sheriff's Office co-managing the police response in the city.

“Every Oregonian has the right to express themselves freely and to peacefully assemble. However, I want to be clear that voter intimidation and political violence will not be tolerated. Not from the Left, the Right, or the Center. Not this week, not any week in Oregon," she wrote in a release by the governor's office.

The unified command will take effect from 5 p.m. Monday through 5 p.m. on Wednesday, Brown said in a release. It was similar to the public safety response during a September Proud Boys rally in Portland. The Portland Police Bureau normally takes the lead when handling unrest in the city.

Oregon state police and the sheriff's office have expressed worries about responding to tense situations without the ability to use tear gas to disperse crowds, OPB reported.

“Especially this year, there are unique dynamics at play that may create an environment ripe for a heated Election Day, and post-election period. This election also comes at a pivotal moment in Oregon, where the pandemic, wildfires, and political atmosphere have boosted fear and anxiety,” Brown said.

“We’ve seen firsthand what happens when free expression is fueled by hate," she continued. "We know that there are some people who might use peaceful election night protests to promote violence and property destruction."

Oregon National Guard members, who are trained in crowd control, were placed on standby in case they are needed to support law enforcement efforts, Brown said, according to the release.

“It is my goal as Governor to ensure the safety of Oregonians, especially as they exercise their fundamental right to vote and practice free speech," she added.

Brown's announcement comes as Wheeler on Tuesday alleged that any potential violence after the presidential election will be at the hands of “white supremist organizations.”

"Given the heightened concerns about potential violence, particularly from white supremist organizations and the divisive rhetoric from Washington, D.C., the need for coordination and partnership takes on statewide significance. Oregon is likely to be a flashpoint," he wrote on Twitter.