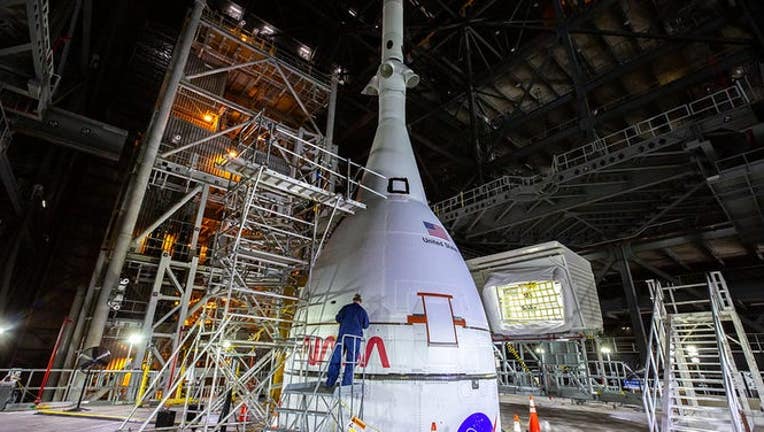 The Artemis I Orion spacecraft, secured on the Space Launch System (SLS) and enclosed in its launch abort system, is in view high up in High Bay 3 of the Vehicle Assembly Building at NASA’s Kennedy Space Center in Florida on Jan. 10, 2022. (Photo cre

NASA is preparing for a critical test of its next-generation moon rocket, the Space Launch System, ahead of the Artemis-1 launch this spring.

Artemis refers to NASA's program to return humans to the moon by 2025, and this time the plan will be to build a sustainable presence on the moon with the help of commercial companies and international partners. Astronauts have not stepped foot on the lunar surface since 1972.

In the fall, NASA Administrator Bill Nelson announced the space agency was targeting mid-February to launch its moon-bound rocket and the Orion spacecraft. However, that has shifted to possibly mid-March due to an issue discovered with one of the rocket engine controllers.

The SLS rocket is fully assembled inside the Vehicle Assembly Building at KSC. The next major milestone for the mission will be to roll out the 322-foot-tall rocket to launchpad 39B to conduct a wet-dress rehearsal of the launch. This test is a complete run-through of the launch countdown. According to NASA, engineers and technicians completed a second countdown sequencing test on Monday.

There are launch windows available in March and April.

LOOK FORWARD TO THESE 2022 MILESTONES IN SPACE EXPLORATION 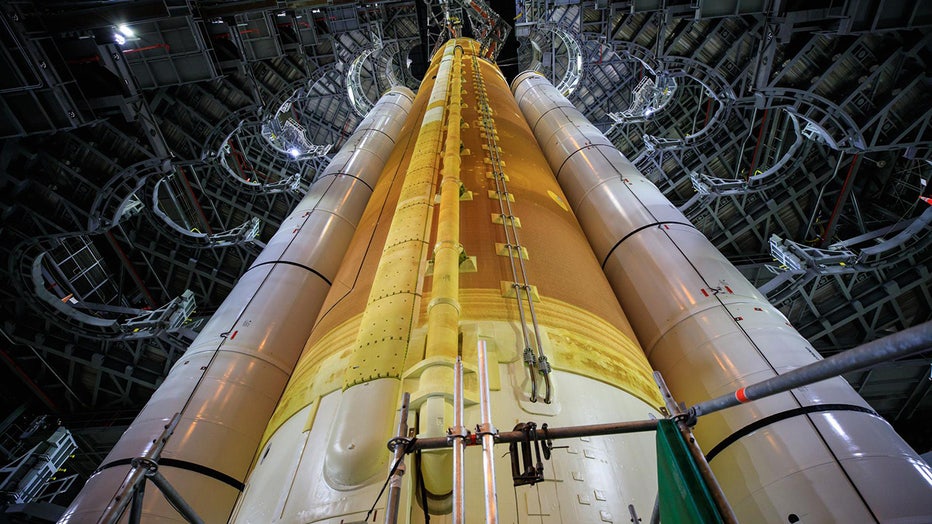 SLS is one part of the Artemis program. NASA and contractors will also assemble the Lunar Gateway, an orbiting outpost around the moon where the Orion will dock, and astronauts can spend a short amount of time before heading down to the moon's surface.

Last year, NASA awarded SpaceX the human landing system contract for its Starship spaceship. SpaceX is developing the spacecraft in Texas with plans to launch it from Kennedy Space Center in the coming years.

Before humans return to the moon, NASA has contracted a series of robotic missions to the moon that will begin launching later this year. The first is a moon lander built by the Pittsburgh-based company Astrobotic. The Peregrine moon lander will carry about 16 payloads, including ten from NASA focused on science and exploration of the moon.

LINK: Get updates on this story and others at FOXweather.com

Editor's note: An earlier version of this report stated the launch was targeted for February. This version has been updated.