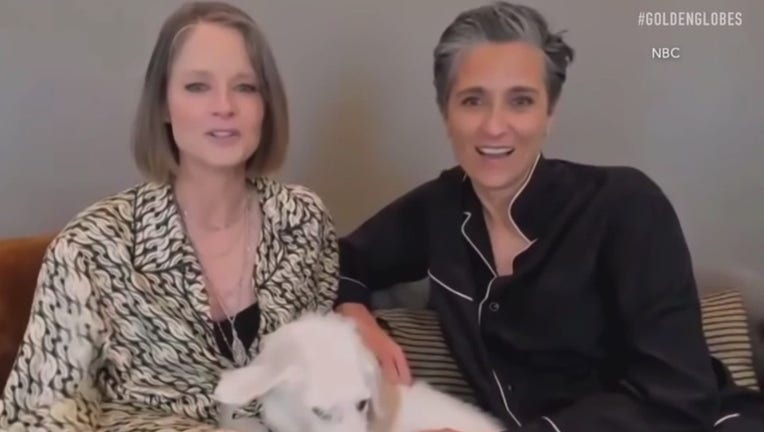 LOS ANGELES - Jodie Foster thanked Green Bay Packers quarterback Aaron Rodgers at the Golden Globes, fulfilling a promise the actress had made before she won.

Foster clarified Sunday night that she did not introduce Rodgers to actress Shailene Woodley, who recently confirmed her engagement to the NFL’s MVP.

"I have never met Aaron Rodgers, but it is possible that I do like to talk about how much I love the Green Bay Packers," Foster said in virtual comments backstage. "Sometimes I can talk a little bit too much about that, so of course Shailene was very aware of my enthusiasm for the team."

Foster won for supporting actress in a motion picture for "The Mauritanian," in which she co-stars with Woodley.

"I just got a very cute video from Aaron Rodgers where he says he’s going to get me back," Foster told reporters, "so I’m looking forward to this. We’ll see who wins."

The public back-and-forth between Oscar winner Foster and Rodgers began in early February, when he thanked Foster after being named MVP at the NFL Honors show. Rodgers casually dropped in the news that he was engaged during his acceptance speech.

Foster later said on "Jimmy Kimmel Live" that she would thank Rodgers if she won a Globe, and she kept her promise.

‘Zoom fatigue:’ Professor notes 4 reasons why it exhausts us

Whether it's a phone call, meeting or distance learning, video chatting and conferencing have been so popular during the pandemic. It’s leaving some folks feeling anxious and tired.&nbsp;

New York Gov. Andrew Cuomo has asked the state's attorney general and chief appeals court judge to jointly appoint an independent lawyer to investigate claims he sexually harassed at least two women who worked for him.