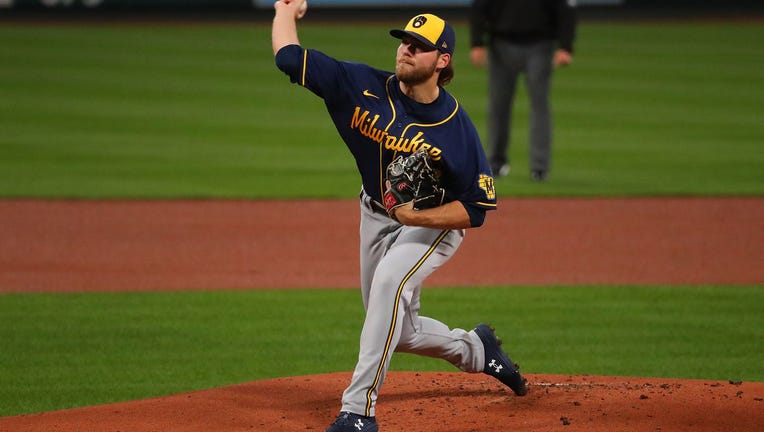 ST LOUIS, MO - SEPTEMBER 24: Corbin Burnes #39 of the Milwaukee Brewers delivers a pitch against the St. Louis Cardinals in the first inning at Busch Stadium on September 24, 2020 in St Louis, Missouri. (Photo by Dilip Vishwanat/Getty Images)

Brewers manager Craig Counsell said that if Milwaukee advances to the playoffs, Burnes would be unavailable for the first round and would be doubtful for the second round. The Brewers (27-29) are outside of playoff position but haven’t been eliminated from contention yet heading into the final weekend of the regular season.

“Take the next couple of days off and then start slowly working back into it, and we’ll see how quickly we can get things ramped up depending on how I’m recovering,” Burnes said.

He suffered his first loss of the season Thursday by allowing three runs and six hits over 3 2/3 innings as the Brewers fell 4-2 to the St. Louis Cardinals. The injury, which was described Thursday night as lower back discomfort, appeared to bother Burnes throughout the fourth inning.

Burnes was placed on the injured list after undergoing an MRI.

“It didn’t end the way you necessarily wanted it to,” Counsell said. “He had a great season. We’ve talked about it many times — he should be happy with what he accomplished. One, you’ve got to heal up and see what happens. But regardless of what happens, he should be really pleased with what he’s been able to accomplish in the regular season.”

Burnes said the issue started bothering him during his previous start and cropped up periodically throughout the week, but that he felt fine before Thursday’s game.