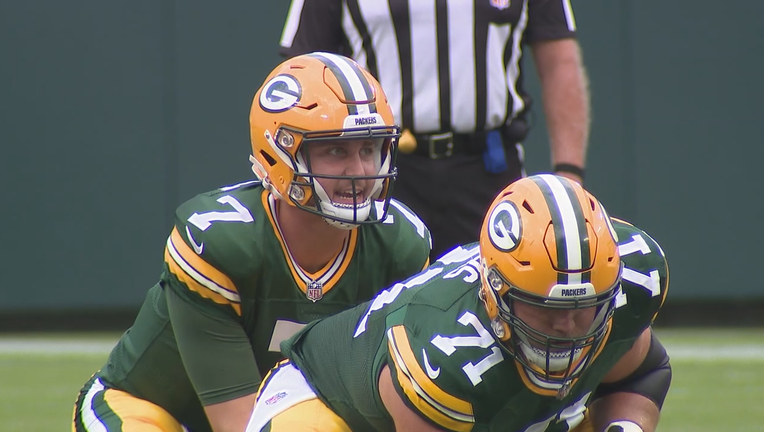 GREEN BAY, Wis. - Kurt Benkert got an opportunity on Saturday afternoon and he didn't trip and fall, although on two straight plays he tripped and fell.

"The thing that I'm most proud of is just that drive that could have went to crap and it didn't and we ended up just rolling with it." said Benkert. "But I think it's just a testament to kind of how I like to play and just keep on going. I'm not going to be gun-shy because something went wrong. So I just want them to know that's how I play. And I'm going to do my best to take care of the football and make plays."

Benkert's play has pushed him up the depth chart.

Is that enough to get him onto the roster for the regular season? Or if the Packers made a move, could another team elsewhere in the league claim him?

What's it like working behind Aaron Rodgers and with Jordan Love? Welcome to Kurt Benkert's world.

"I think Kurt has done a really nice job and definitely going to make it tough on us to to decide which way we want to go," said Packers head coach Matt LaFleur.

"I feel like I've done everything that I could," Benkert said. "I felt like I put myself in a pretty good position. But at the end of the day, I know it's a numbers game and I could play like absolute crap and they need me and I'm going to 53 or I could play really well and they don't need me on the practice squad. So I kind of ditch that mindset over a few years ago and we'll see what happens.

Every competitor wants to be on the field, have the chance to play.

Benkert is no different, but in reality, the chance to back up is his best shot to being a Packer.

"I know my role," said Benkert. "I know my spot. And for me, it's just bringing value whatever way I can. I may not have to touch the field this year and that's awesome and we'll follow 12's lead and all that. But if I have to play, I'll be ready and I'll show that I can do what I can do. But that's way out of my hands. And I'm just here to bring value to everybody else and have a good time."

The question is out there. The Packers are seeing there may be a curt response.