"Thousands" of people again flocked to the Kabul airport on August 16 in a bid to escape after the Afghan capital fell under Taliban control the previous day, journalist Matthieu Aikins reported. (Credit: Matthieu Aikins via Storyful)

The world watched as Afghans desperate to evade the Taliban crowded into departing aircraft, but what happens to them when those planes land?

Emboldened by the departure of the U.S. Armed Forces, the Taliban overthrew the internationally recognized government of Afghanistan over the weekend.

Afghans who’d worked with the Americans over the last two decades suddenly found themselves vulnerable to the Taliban’s hardline brand of Islamist rule and fled the country in droves.

Thousands flocked to the airport in Kabul where the Americans are facilitating the withdrawal. 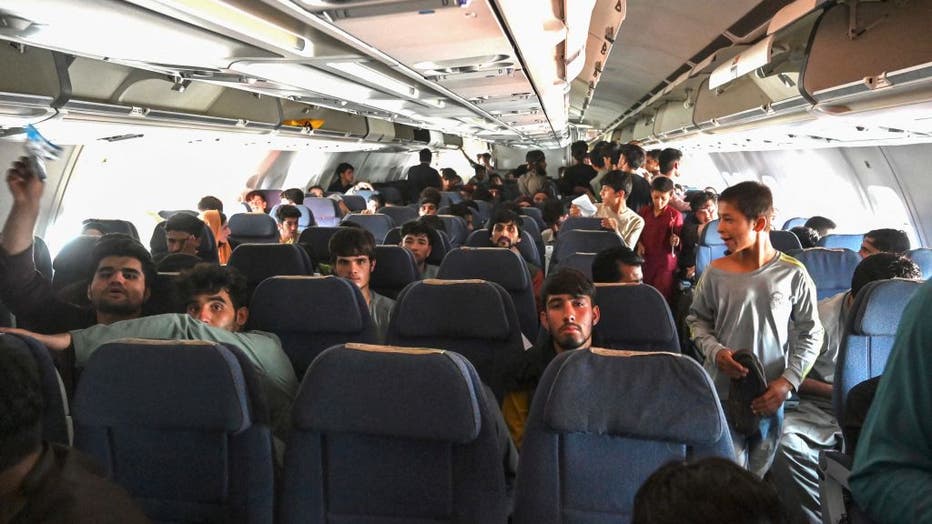 Afghan passengers sit inside a plane as they wait to leave the Kabul airport in Kabul on Aug. 16, 2021, after a stunningly swift end to Afghanistan's 20-year war, as thousands of people mobbed the city's airport trying to flee the group's feared hard

Video also showed people surrounding and clinging to a U.S. Air Force C-17 transport plane as it taxied for takeoff. One video showed people holding on to the landing gear and other parts of the plane. Another video showed a plane in the air with something, or someone, appearing to fall from the aircraft.

RELATED: Georgians with family in Afghanistan heartbroken and fearful of what's to come

President Joe Biden has faced criticism for his handling of the withdrawal. Montana Republican Rep. Matt Rosendale, who said the collapse of the Afghan government is the result of decades of failure by the "foreign policy elite," supports the decision to withdraw troops.

But he said, "The chaos we’re seeing is not an excuse to flood our country with refugees from Afghanistan."

Even so, the Biden administration has found bipartisan support from governors opting to take refugees.

The following is a list of states that have committed to accepting Afghan refugees:

Gov. Gavin Newsom called California a "state of refuge," saying that he’s proud that the Golden State has taken in more refugees than any other state in the last decade — specifically Afghan refugees.

Newsome said his administration is working to bring in more Afghans and hopes for a partnership with nonprofits to "make sure that they feel welcome and celebrated as members of our community. "

A spokesperson for Gov. Kim Reynolds told Axios the governor hopes to house additional refugees to the 94 Iraqis and Afghans who have been resettled in Iowa in the last four years.

FOX Televisions Stations’ request for comment did not receive an immediate response.

"Today, I am announcing Maryland’s commitment to receive more Afghan interpreters who have contributed to U.S. efforts in Afghanistan," Hogan tweeted. "Many of these Afghan citizens—our allies—bravely risked their lives to support our efforts, and we have a moral obligation to help them."

He said many Afghans are eligible for special immigrant visas to the U.S. and that Maryland receives more SIV recipients than any other state.

RELATED: Exclusive: FOX 5 speaks with Afghan refugees as they begin arriving in DMV

According to The State, a reporter asked if he’d welcome refugees to South Carolina.

The Department of Defense is prepping military installations to house thousands of refugees. According to documents obtained by FOX News, Fort Bliss in Texas is one of those sites.

In a statement, the Refugee Services of Texas said, "We stand ready, willing, and able to work with our national resettlement partners, elected representatives, and the military to process and resettle as many people as possible."

RELATED: Some Afghan refugees fleeing Taliban control will be resettled across North Texas

that declared Utah ready to welcome refugees from Afghanistan.

"We are dismayed by the chaos descending on Afghanistan. Utah stands ready to welcome refugees from this war-torn country, especially those who valiantly helped our troops over the past 20 years," the statement said. "We must stand by America’s allies."

Gov. Ralph Northam tweeted on Monday that it was a pleasure to meet some of the thousands of Afghans who’d sought refuge at Fort Lee.

He said he’s coordinating with Washington to accept thousands more.

"Virginia will continue to serve as a safe harbor," Northam said.

Gov. Tony Evers released a statement on Tuesday welcoming the Afghans who are seeking refuge at Fort McCoy.

"Many Afghan people now fleeing their homes have bravely contributed to work in Afghanistan over the past two decades," the statement said. "Just as they protected us in serving our country and helped keep our troops safe, we owe it to them to protect and keep them safe."

RELATED: US prepares to house thousands of Afghan refugees on American military installations

Evers said his administration has been working with federal resettlement efforts.

"As we learn more information, Wisconsin is ready to assist these efforts and help these individuals who served our country and are now seeking refuge."