SANTA FE, N.M. - Dashcam video captured the terrifying moments of a New Mexico sheriff’s deputy quickly acting to save a 1-year-old girl from choking to death.

The Santa Fe County Sheriff’s Department shared a video of the incident reported on June 5 along an interstate in Santa Fe. Deputy Sheriff Patrick Ficke said he noticed a vehicle driving erratically and initiated a traffic stop.

The father got out of the vehicle holding the toddler, who he said was not breathing. Ficke said the girl was turning purple and he immediately called for an ambulance and then jumped into action.

"I checked her airway. I could see she was choking on something," Ficke said in a video shared to the department’s Facebook page. "I turned her around and started performing the Heimlich maneuver for essentially an infant."

After about "45 seconds to a minute," a Cheeto blocking the child’s airway was dislodged and she began crying, according to Ficke. The video shows the sheriff’s deputy then turning the toddler back upright and trying to comfort her. 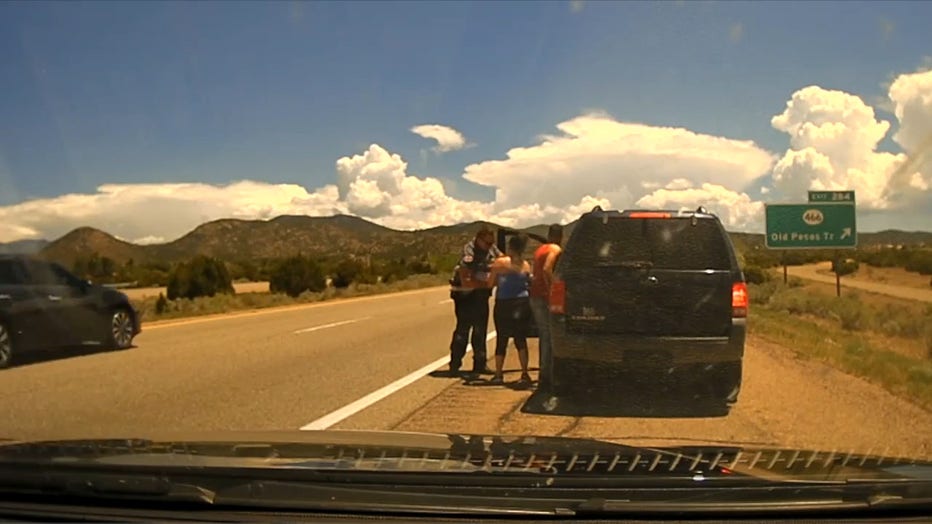 Sheriff’s deputy Patrick Ficke is shown in a screengrab taken from a dashcam video during the rescue on June 5, 2021, in Santa Fe, New Mexico. (Credit: Santa Fe County Sheriff via Storyful)

The Heimlich maneuver involves abdominal thrusts on someone who is choking in an effort to lift their diaphragm and force air from the lungs to dislodge the object. For choking infants, usually less than 1-year-old, experts say to place the baby face down and give the child five, quick forceful blows between their shoulder blades with the heel of the hand, according to Stanford Children’s Health.

The U.S. Center for Disease Control and Prevention advises children to always sit up while eating, preferably in a high chair or another safe place, rather than in a car or stroller. Cutting up food into smaller pieces and mashing foods can help prevent choking in toddlers.

"It was pretty scary for a bit. One thing with calls is that you never want to see a child hurt," Ficke said. "I was just lucky I was there at the right time and able to help her."