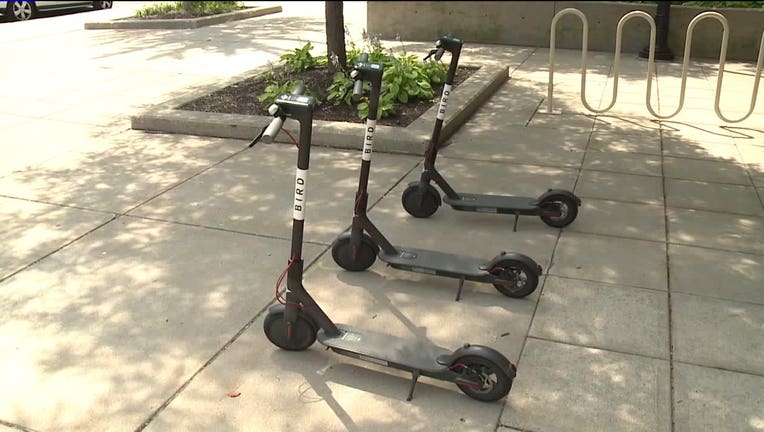 MILWAUKEE - The Milwaukee Department of Public Works (DPW) on Wednesday, Sept. 30 released a report on its pilot study for dockless scooters in the city.

The pilot ran from July 23, 2019 to Dec. 31, 2019 and aimed at observing the scooters' effectiveness and soliciting feedback.

As part of the 2019 study, scooters from three companies -- Bird, Lime and Spin -- were included, the goals being to increase transportation options, expand transit access and evaluate right-of-way impacts during travel.

The study came following the removal of Bird scooters from the city the previous summer.

In June 2018, Bird launched dockless scooters in Milwaukee, but they were removed in August.

The following summer, Gov. Tony Evers signed a bill that legalized the scooters. In July 2019, Milwaukee banned scooters are unless they were participating in the pilot study.

The 2019 study included three zones across Milwaukee's north, south side and the downtown and lakefront areas, stretching into parts of the Historic Third Word and the East Side.

The study found that, on average, there were 2,762 dockless scooter rides per day in the city -- totaling 350,130 rides. Among those rides, the study found 67 operator-reported crashes.

Among reported crashes, 22 were described as "fall with no injury" and four involved a crash with a car. Twenty-nine crashes were listed as "unspecified unsafe riding."

As part of the study, the mayor's office collected feedback through emails and phone calls.

Among those who supported scooter use, most people described a general support. However, among those who were against the use of scooters, the most common reasons noted included the scooters being unsafe and riding and sidewalks.

The DPW on Wednesday recommended in its report that the city conduct a new pilot study in Spring 2021.

Specifically, the new study would look at changes including zones, fleet sizes for scooters and payment structure.

The DPW also recommends requiring operators to conduct safety and parking educational events. The creation of assigned parking corrals for scooters in high-demand areas is also being recommended.

The full findings of the report -- including a full list of the DPW's recommendations -- are available online here.