WASHINGTON — President Donald Trump lashed out Wednesday over sharp criticism of his decision to pull back U.S. troops from northeastern Syria, insisting he is focused on the "BIG PICTURE" that doesn't include American involvement in "stupid endless wars" in the Middle East.

"Fighting between various groups that has been going on for hundreds of years. USA should never have been in Middle East," President Trump said in a series of morning tweets. "The stupid endless wars, for us, are ending!"

Turkey launched its offensive Wednesday against Kurdish fighters in Syria, who have helped the U.S. against the Islamic State. Turkey views the Syrian Kurdish fighters as terrorists, and President Trump's decision to pull back U.S. troops leaves them vulnerable to the military onslaught. 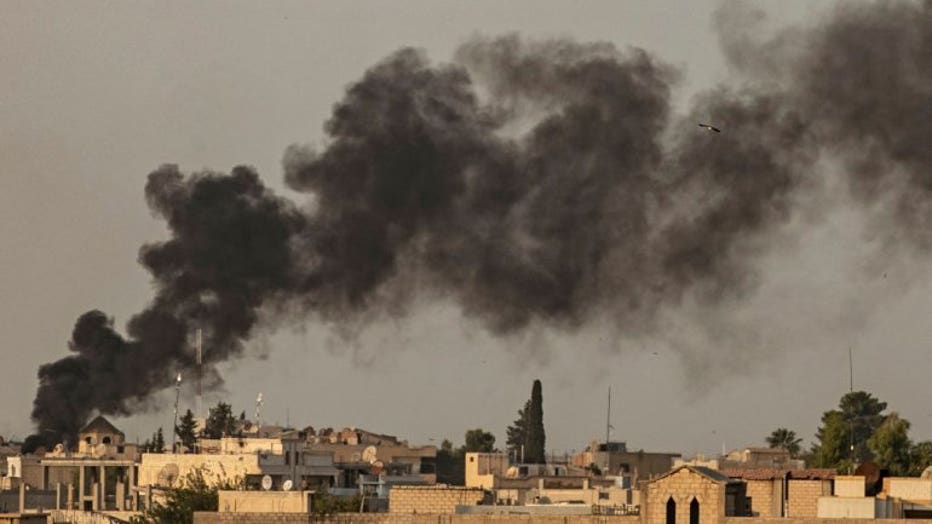 Smoke billows following Turkish bombardment on Syria's northeastern town of Ras al-Ain in the Hasakeh province along the Turkish border on October 9, 2019. - Turkey launched an assault on Kurdish forces in northern Syria with air strikes and explosio

President Trump's words are at odds with longstanding U.S. policy of keeping thousands of American troops in the strategically important region, and his decision is being condemned by some of his staunchest Republican allies.

Sen. Lindsey Graham, R-S.C., a close President Trump ally, stepped up his criticism of the president Wednesday, telling "Fox & Friends" that if President Trump "follows through with this, it would be the biggest mistake of his presidency." 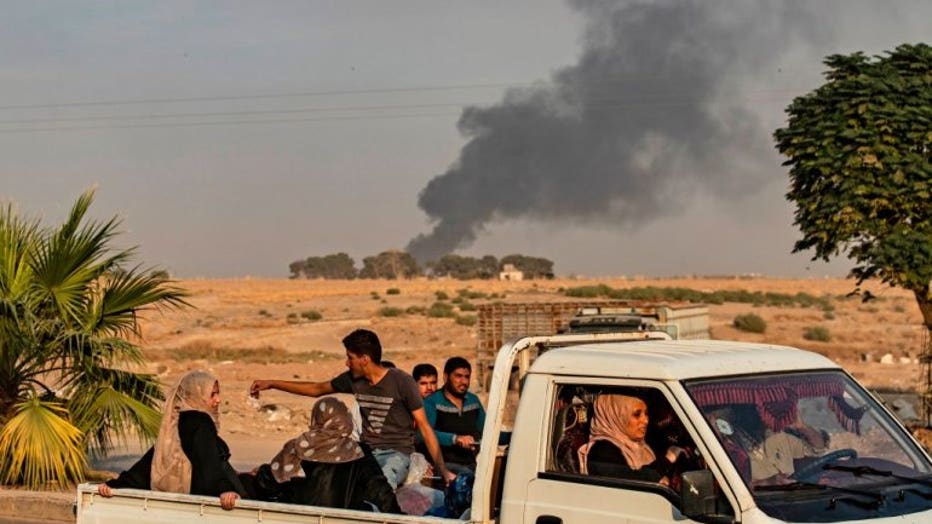 Civilians ride a pickup truck as smoke billows following Turkish bombardment on Syria's northeastern town of Ras al-Ain in the Hasakeh province along the Turkish border on October 9, 2019. - Turkey launched an assault on Kurdish forces in northern Sy

In tweets, Graham urged prayers for "our Kurdish allies who have been shamelessly abandoned by the Trump Administration," adding, "This move ensures the reemergence of ISIS." He also said he would lead an effort in Congress to "make Erdogan pay a heavy price," referring to Turkish President Recep Tayyip Erdogan, who announced the offensive into northern Syria.

Another President Trump ally, Rep. Liz Cheney of Wyoming, a member of the GOP leadership, said she was sickened by the prospect of a Turkish incursion. "Impossible to understand," she tweeted, why President Trump "is leaving America's allies to be slaughtered and enabling the return of ISIS."

President Trump argued on Twitter that "GOING INTO THE MIDDLE EAST IS THE WORST DECISION EVER MADE IN THE HISTORY OF OUR COUNTRY!" He said the U.S. went to war under a "false & now disproven premise, WEAPONS OF MASS DESTRUCTION. There were NONE!"

President Trump said he is "slowly & carefully" bringing home "our great soldiers & military," in line with his campaign promise to do so.

He added: "Our focus is on the BIG PICTURE! THE USA IS GREATER THAN EVER BEFORE!"

President Trump's call for ending U.S. military involvement in the Middle East and bringing the troops home was a feature of his presidential campaign, but it flies in the face of many decades of bipartisan American policy, even as the Trump administration and its immediate predecessor have tried to give additional attention to what they see as long-term security threats elsewhere, including from China and Russia.

The U.S. has more than 10,000 troops based across the Middle East, including about 5,200 in Iraq, 1,000 in Syria and several thousand others at bases in Kuwait, the United Arab Emirates and Qatar. Also, the U.S. Navy's Mideast headquarters is at Bahrain in the Persian Gulf.

Just a couple of months ago the Pentagon reestablished a troop presence in Saudi Arabia after a lengthy absence, and in May it added air and naval forces in the region in response to what it views as worrying threats from Iran.

As a further sign that the military does not share President Trump's view that the fight against the extremists is over, a press release Wednesday by the U.S.-led military coalition combating IS highlighted recent battlefield gains. It concluded by saying that "removing" IS fighters, weapons and bomb materials "remains a top priority" as the group "continues to plot attacks against innocent civilians and our partners throughout Iraq and northeast Syria."

President Trump has long criticized President George W. Bush's decision to invade Iraq in 2003, but the subsequent rise of extremist groups like the Islamic State has convinced many national security officials, and lawmakers such as Graham, that a precipitous U.S. troop withdrawal from the region would leave the U.S. and its allies even more vulnerable to extremism.

President Trump also claimed the U.S. has spent $8 trillion "fighting and policing" in the Middle East, up from the $7 trillion figure he has cited numerous times.

President Trump is using an inflated estimate on the cost of wars and referring in part to predicted costs going decades into the future, not money actually spent. Some of the spending also reflects his policy decisions he made since taking office nearly three years ago.

Graham said Congress "will push back" against Turkey. He had said earlier this week that he was working on a bipartisan bill to sanction Turkey if they invade Syria, but he did not mention the proposal during Wednesday's interview.

"We're not giving Turkey a green light in Congress and we're not going to abandon the Kurds," he said. "If the President does so, we won't."

President Trump announced Tuesday that he and Erdogan will meet at the White House on Nov. 13.