During this year's gathering of leaders of the world's wealthiest democracies, President Trump went to great lengths to portray it as something of a lovefest, papering over significant disagreements on major issues.

"If there was any word for this particular meeting of seven very important countries, it was unity," President Trump said at a news conference Monday closing out the two-day gathering in the French resort of Biarritz. 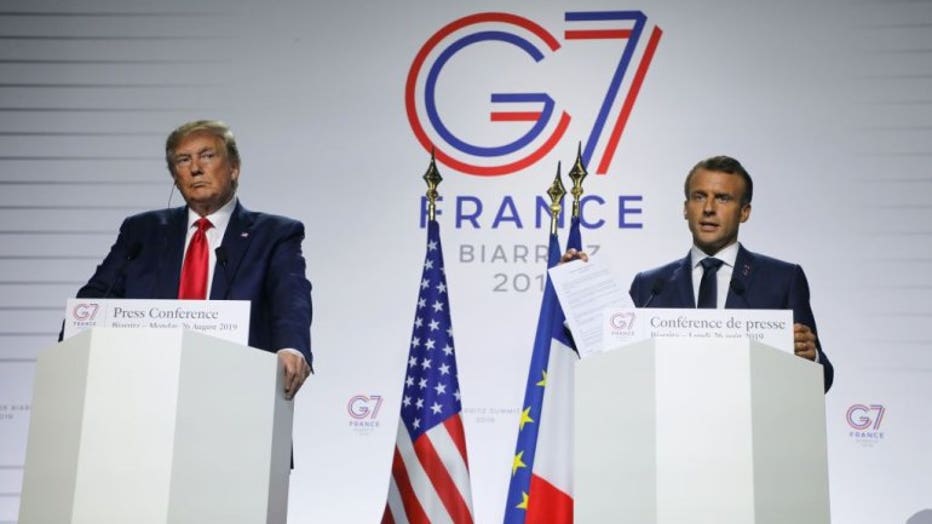 France's President Emmanuel Macron (R) and US President Donald Trump deliver a joint press conference in Biarritz, south-west France on August 26, 2019, on the third day of the annual G7 Summit attended by the leaders of the world's seven richest dem

After President Trump disrupted the last two G-7 summits with his erratic behavior, other world leaders seemed determined to play along this year in the interest of keeping any negative drama out of the headlines.

First came the decision by French President Emmanuel Macron, the summit host, to scrap the annual practice of issuing a lengthy joint statement, or communique, at the summit's conclusion. 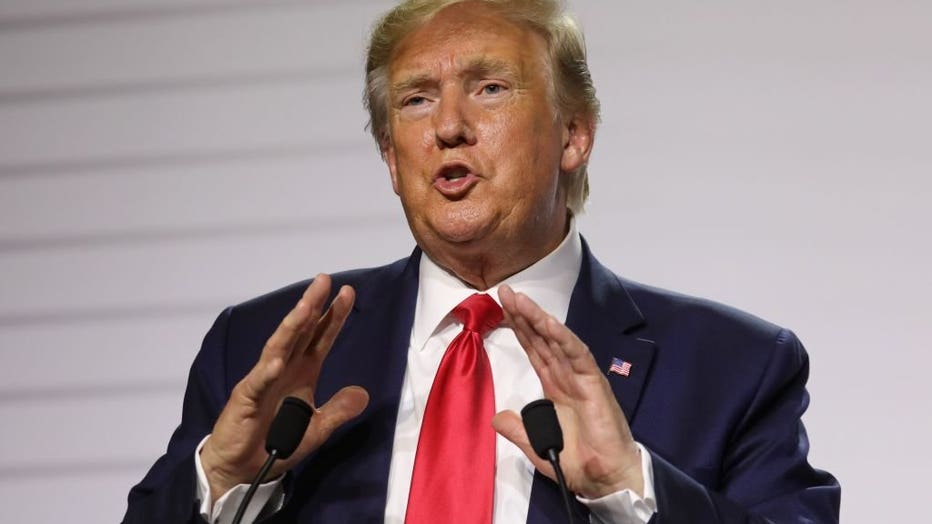 US President Donald Trump gestures during a joint-press conference with French President Emmanuel Macron in Biarritz, south-west France on August 26, 2019, on the third day of the annual G7 Summit attended by the leaders of the world's seven richest

The document typically spells out the consensus that leaders have reached on issues on the summit agenda and provides a roadmap for how they plan to tackle them.

President Trump roiled the 2017 meeting in Italy over the climate change passage in that summit's final statement. And he withdrew his signature from the 2018 communique after complaining he had been slighted by Canadian Prime Minister Justin Trudeau, the host that year.

"I think it's against that background that Macron decided it's not worth it" to issue a statement, said Thomas Bernes, a distinguished fellow at the Center for International Governance Innovation in Canada. 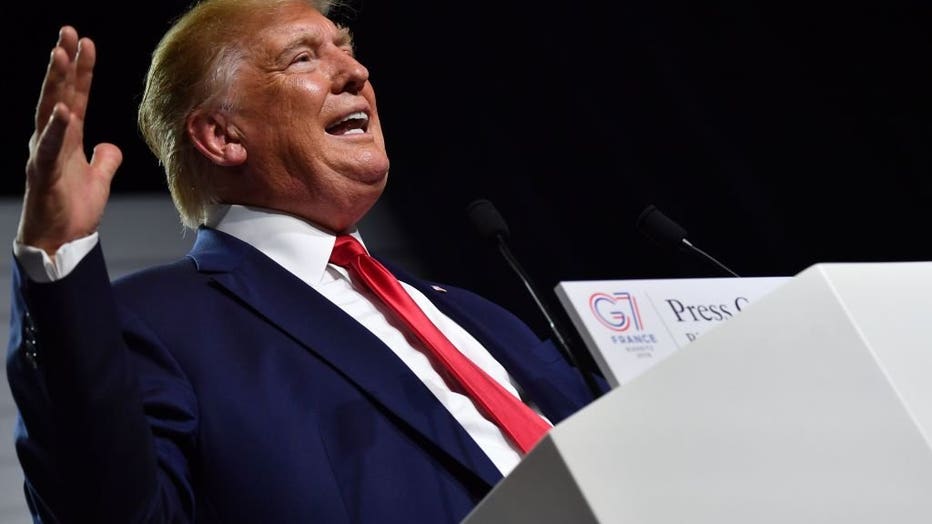 US President Donald Trump gestures during a press conference in Biarritz, south-west France on August 26, 2019, on the third day of the annual G7 Summit attended by the leaders of the world's seven richest democracies, Britain, Canada, France, German

Instead, the leaders issued a final "declaration" that began: "The G7 leaders wish to emphasize their great unity and the positive spirit of their debates."

Macron also sought to play down awkward differences and said that what the G-7 leaders were "really keen on was to convey a positive and joint message following our discussions."

The French leader stressed that everyone had worked "together, hand in hand, with President Trump over these two days." 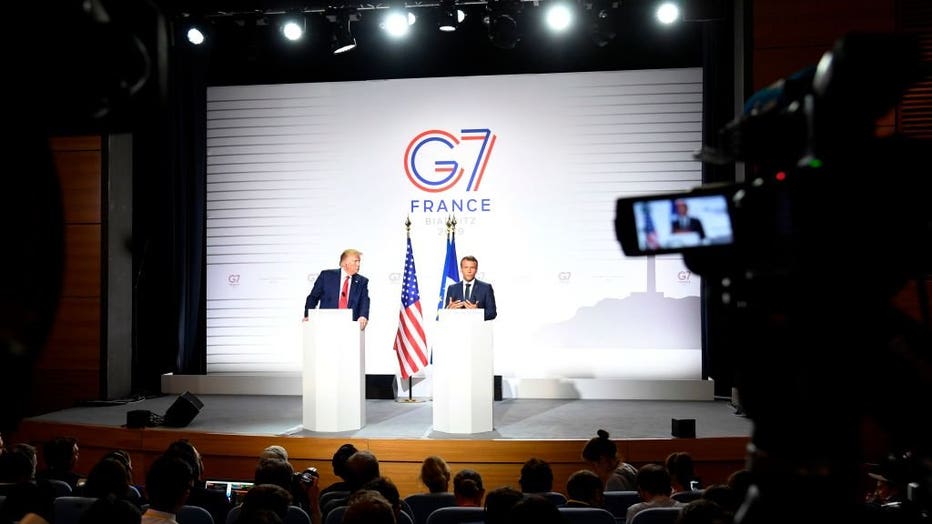 France's President Emmanuel Macron (R) and US President Donald Trump give a joint press conference in Biarritz, south-west France on August 26, 2019, on the third day of the annual G7 Summit attended by the leaders of the world's seven richest democr

For all of the happy talk, though, President Trump came under pressure to end his lengthy trade dispute with China that is hurting other nations as well.

Macron said the dispute had served to "create uncertainty" that is "bad for the world economy."

President Trump, as he had before last year's summit, said he would like to see Russia re-admitted to the club. The former G-8 kicked Russia out after President Vladimir Putin annexed the Crimean Peninsula in 2014.

While his affinity for Russia has been questioned at home, President Trump said Monday he'd prefer Russia be "inside the tent" rather than outside since so many of the issues the leaders discussed involved Russia.

Other members of the Group of Seven besides France, Canada, Italy and the U.S. are Britain, Germany and Japan.

Canada's Trudeau told reporters he had privately aired his objection to Russian readmittance.

"Russia has yet to change the behavior that led to its expulsion in 2014, and therefore should not be allowed back into the G-7," he said at a news conference.

President Trump insisted that he and Abe were on the "same page" — but he appeared to defend the missile tests by North Korea's Kim Jong Un by saying a lot of other people were testing missiles, too.

"We're in the world of missiles, folks, whether you like it or not," he said.

President Trump also claimed that "great unity" existed on Iran, but he largely just restated his long-held views about the country, some of them hardly shared.

France, Germany and other G-7 members are unhappy that President Trump withdrew the U.S. from a 2015 international pact that eased sanctions on Iran in exchange for the Iranians agreeing to limit their nuclear program.

President Trump said the biggest conclusion the leaders reached was that Iran "can't have nuclear weapons." Far from a breakthrough, that has been the world's position for decades.

Asked about his efforts to ensure that fighters for the Islamic State group be returned to their home countries across Europe rather than housed by the United States, President Trump said during a meeting with German Chancellor Angela Merkel that the G-7 leaders had "a pretty good meeting." But then he allowed that they had "not reached a total conclusion."

Macron flicked at the challenges of smoothing over differences by reaching back in history.

Seeking to justify the role of mediator between Iran and the United States that Macron is carving out, the French leader quoted one of his predecessors, World War II hero Gen. Charles de Gaulle, who said: "Diplomacy is trying to hold together broken windows."