ALBANY, N.Y. — Nexstar Media Group partnered with Emerson College to take New York’s pulse with an exclusive poll about health, finances and how our leaders are handling the outbreak.

Who is doing a good job dealing with this virus?

Governor Andrew Cuomo’s national popularity is nothing on how New Yorkers feel about him at home. His numbers are off the chart, with 71% approving of his performance, only 17% disapproving and 12% remaining neutral. 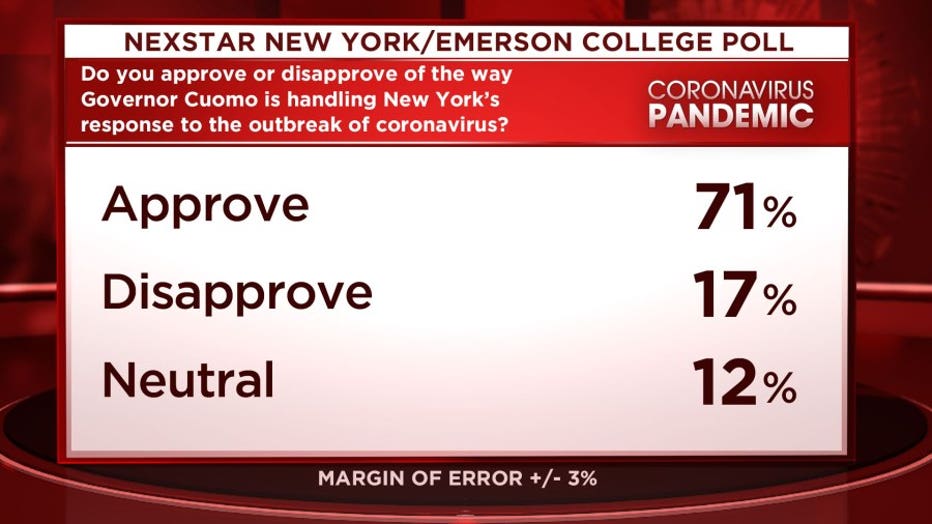 As for President Donald J. Trump, his numbers not nearly so strong. Nearly half of those surveyed, 47%, disapprove of the job he’s doing, and 38% approve. 15% are neutral. 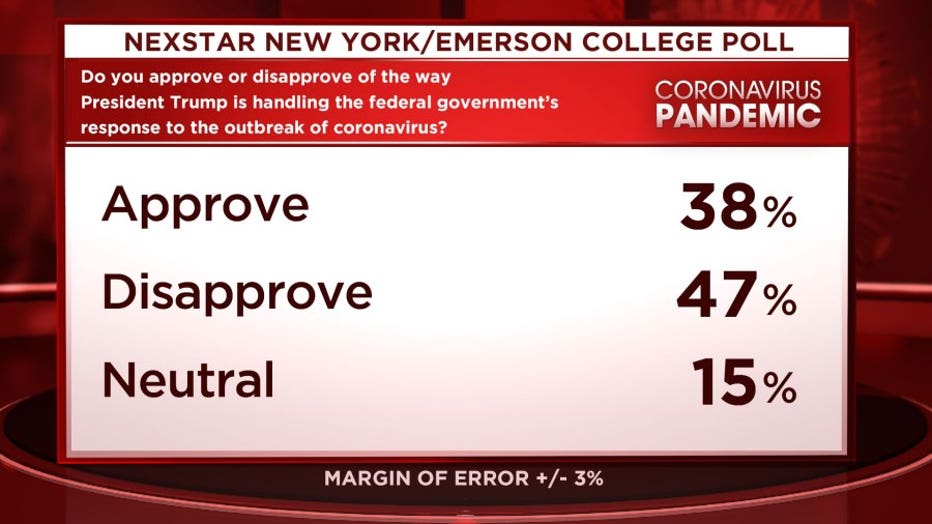 The economic impact of the virus is obvious, and 40% of those polled say that they or someone in their household became unemployed during the pandemic. If you dig into the demographics of these questions, you find that Latina and Hispanic households have taken the largest hit.

When asked to choose whether New Yorkers were more worried about finances or personal health, it wasn’t even close. Worries about health make up 78% of responses.

Which part of New York’s life is affected the most because you’re at home and isolated? A quarter of respondents say their income is their biggest concern, and almost as many people chose mental health. For most people, child care and rent are less concerning, but just under a third say they are preoccupied with other issues.

Patients from New York City are brought to upstate hospitals every day, and exactly half of the respondents say they’re OK with that. A little more than one out of five people are against it, however, and almost one out of three are still unsure.

The New York Emerson College/Nexstar poll was conducted April 3-5, 2020. This poll was conducted in English and Spanish. The sample consisted of New York residents, with a Credibility Interval (CI) similar to a poll’s margin of error (MOE) of +/- 3 percentage points. The data sets were weighted by gender, age, ethnicity, education, and region. It is important to remember that subsets based on gender, age, party breakdown, ethnicity, and region carry with them higher margins of error, as the sample size is reduced. Data was collected using an Interactive Voice Response (IVR) system of landlines (n=669), Mobile phones (n=289), and an online panel provided by MTurk (n=42).