PROVIDENCE, R.I. - Tesla CEO Elon Musk has laid out some bold, if still vague, plans for transforming Twitter into a place of "maximum fun" once he buys the social media platform for $44 billion and takes it private.

But enacting what at the moment are little more than a mix of vague principles and technical details could be considerably more complicated than he suggests.

Here's what might happen if Musk follows through on his ideas about free speech, fighting spam and opening up the "black box" of artificial intelligence tools that amplify social media trends.

Musk's feistiest priority -- but also the one with the vaguest roadmap -- is to make Twitter a "politically neutral" digital town square for the world's discourse that allows as much free speech as each country's laws allow.

He's acknowledged that his plans to reshape Twitter could anger the political left and mostly please the right. He hasn't specified exactly what he'll do about former President Donald Trump's permanently banned account or other right-wing leaders whose tweets have run afoul of the company's restrictions against hate speech, violent threats or harmful misinformation.

A rancher is offering 100 acres of free land to Elon Musk if he moves the Twitter headquarters from California to Schwertner, Texas.

Should Musk go this direction, it could mean bringing back not only Trump, but "many, many others that were removed as a result of QAnon conspiracies, targeted harassment of journalists and activists, and of course all of the accounts that were removed after Jan. 6," said Joan Donovan, who studies misinformation at Harvard University. "That could potentially be hundreds of thousands of people."

Musk hasn't ruled out suspending some accounts, but says such bans should be temporary. His latest criticism has centered around what he described as Twitter's "incredibly inappropriate" 2020 blocking of a New York Post article on Hunter Biden, which the company has said was a mistake and corrected within 24 hours.

Musk's longstanding interest in AI is reflected in one of the most specific proposals he outlined in his merger announcement -- the promise of "making the algorithms open source to increase trust." He's talking about the systems that rank content to decide what shows up on users' feeds.

Partly driving the distrust, at least for Musk supporters, is lore among U.S. political conservatives about "shadow-banning" on social media. This is a supposed invisible feature for reducing the reach of badly behaving users without disabling their accounts. There has been no evidence that Twitter's platform is biased against conservatives; studies have found the opposite when it comes to conservative media in particular.

Musk has called for posting the underlying computer code powering Twitter's news feed for public inspection on the coder hangout GitHub. But such "code-level transparency" gives users little insight into how Twitter is working for them without the data the algorithms are processing, said Nick Diakopoulos, a Northwestern University computer scientist.

Diakopoulos said there are good intentions in Musk's broader goal to help people find out why their tweets get promoted or demoted and whether human moderators or automated systems are making those choices. But that's no easy task. Too much transparency about how individual tweets are ranked, for instance, can make it easier for "disingenuous people" to game the system and manipulate an algorithm to get maximum exposure for their cause, Diakopoulos said.

Could the social media giant join Elon Musk's other companies in Central Texas? FOX 7 Austin's Kelly Saberi has the details.

"Spam bots" that mimic real people have been a personal nuisance to Musk, whose popularity on Twitter has inspired countless impersonator accounts that use his image and name -- often to promote cryptocurrency scams that look as if they're coming from the Tesla CEO.

Sure, Twitter users, among them Musk, "don't want spam," said David Greene, civil liberties director at the Electronic Frontier Foundation. But who defines what counts as a spam bot?

"Do you mean all bots like, you know, if I follow a Twitter bot that just pulls up historic photos of fruits? I choose to follow that. Is that not allowed to exist?" he said.

There are also plenty of spam-filled Twitter accounts at least partially run by real people that run the gamut from ones that hawk products to those promoting polarizing political content to meddle in other countries' elections.

Elon Musk reached an agreement to buy Twitter for roughly $44 billion on Monday, promising a more lenient touch to policing content on the social media platform where he — the world's richest person — promotes his interests, attacks critics and opines on a wide range of issues to more than 83 million followers.

Musk has repeatedly said he wants Twitter to "authenticate all humans," an ambiguous proposal that could be related to his desire to rid the website of spam accounts.

Ramping up mundane identity checks -- such as two-factor authentication or popups that ask which of six photos shows a school bus -- could discourage anyone from trying to amass an army of bogus accounts.

Musk might also be considering offering more people a "blue check" -- the verification checkmark sported on notable Twitter accounts -- like Musk's -- to show they're who they say they are. Musk has suggested users could buy the checkmarks as part of a premium service. 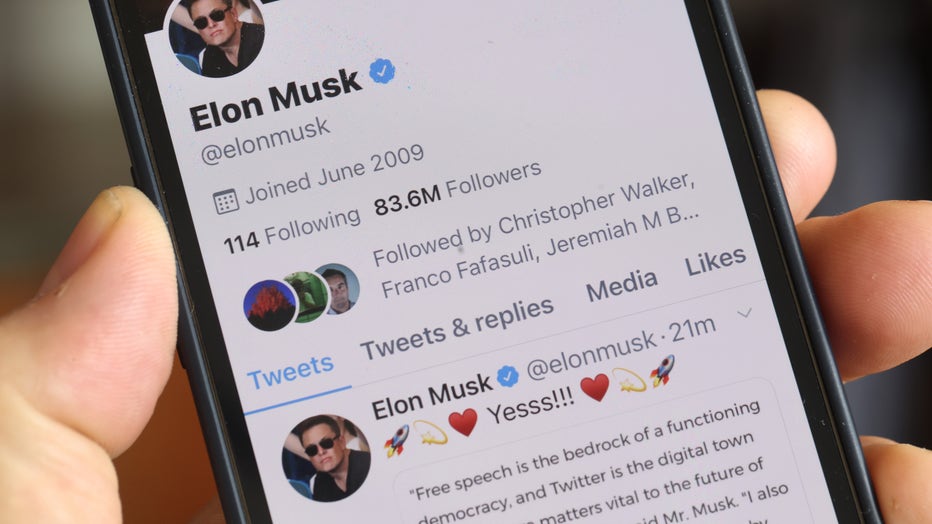 CHICAGO, ILLINOIS APRIL 25: In this photo illustration, The Twitter profile of Elon Musk with more than 80 million followers in shown on a cell phone on April 25, 2022 in Chicago, Illinois. It was announced today that Twitter has accepted a $44 billi

But some digital rights activists are concerned these measures could lead to a "real-name" policy resembling Facebook's approach of forcing people to validate their full names and use them in their profiles. That would seem to contradict Musk's free speech focus by muzzling anonymous whistleblowers or people living under authoritarian regimes where it can be dangerous if a dissident message is attributable to a particular person.

Musk has floated the idea of an ad-free Twitter, though it wasn't one of the priorities outlined in the official merger announcement. That may be because cutting off the company's chief way of making money would be a tall order, even for the world's richest person.

Advertisements accounted for more than 92% of Twitter's revenue in the January-March fiscal quarter. The company did last year launch a premium subscription service -- known as Twitter Blue -- but doesn't appear to have made much headway in getting people to pay for it.

Twitter announced on Monday that they have agreed to Elon Musk acquiring the social media platform for $44 billion, and now some of the biggest names in Hollywood are reacting to the change in ownership of Twitter.

Musk has made clear he favors a stronger subscription-based model for Twitter that gives more people an ad-free option. That would also fit into his push to relax Twitter's content restrictions -- which brands largely favor because they don't want their ads surrounded by offensive and hate-filled tweets.

Musk has tweeted and voiced so many proposals for Twitter that it can be hard to know which ones he takes seriously. He's joined the popular call for an "edit button" -- which Twitter says it's already working on -- that would enable people to fix a tweet shortly after posting it. A less serious proposal from Musk suggested converting Twitter's downtown San Francisco headquarters to a homeless shelter "since no one shows up anyway" -- a comment taken more as a dig on Twitter's pandemic-era workforce than an altruistic vision for the building.

Musk didn't return an emailed request to clarify his plans.