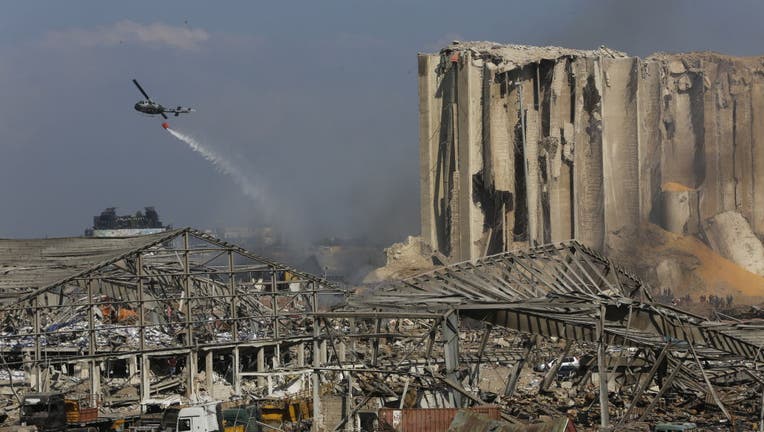 BEIRUT, LEBANON - AUGUST 05: A helicopter drops water on smoldering buildings in the city's port, destroyed by an explosion a day earlier, on August 5, 2020 in Beirut, Lebanon. (Photo by Marwan Tahtah/Getty Images)

WASHINGTON - President Donald Trump said U.S. military generals have told him that they “seem to feel” the massive explosion that rocked Beirut on Tuesday, killing at least 70 people, was a “terrible attack” likely caused by a bomb.

Trump was asked why he called it an attack and not an accident, especially since Lebanese officials say they have not determined the cause of the explosion. He told reporters at the White House: “It would seem like it based on the explosion. I met with some of our great generals and they just seem to feel that it was. This was not a — some kind of a manufacturing explosion type of a event. ... They seem to think it was a attack. It was a bomb of some kind, yes.”

Trump offered condolences to the victims and said the United States stood ready to assist Lebanon. “It looks like a terrible attack,” he said.

A Pentagon spokesman declined to comment on the matter Tuesday night, referring questions back to the White House.

The explosion flattened much of a port and damaged buildings across the capital, sending a giant mushroom cloud into the sky. In addition to those who died, more than 3,000 other people were injured, with bodies buried in the rubble, officials said.

The cause of the blast was not immediately known, but initial reports suggested a fire had detonated a warehouse at the port. Abbas Ibrahim, chief of Lebanese General Security, said it might have been caused by highly explosive material that was confiscated from a ship some time ago and stored at the port. Local television channel LBC said the material was ammonium nitrate.

Witnesses reported seeing a strange, orange cloud like that which appears when toxic nitrogen dioxide gas is released after an explosion involving nitrates.