Dr. Grossman with the Grossman Burn Unit at the West Hills Hospital says Leno is on the mend and is in good condition after he suffered serious injuries in a car fire at his garage in Burbank over the weekend.

Leno was released from the hospital where he was being treated for second and third-degree burns he suffered in a gasoline fire that occurred while he was working on one of his vintage cars in his Burbank garage. While working on the vehicle, an exhaust flare-up occurred, and he suffered burns to his hands, face, and chest.

Hospital officials say he will continue to receive follow-up care on an outpatient basis, but Dr. Peter Grossman says he's pleased with Leno's progress, saying "I am optimistic that he will make a full recovery." 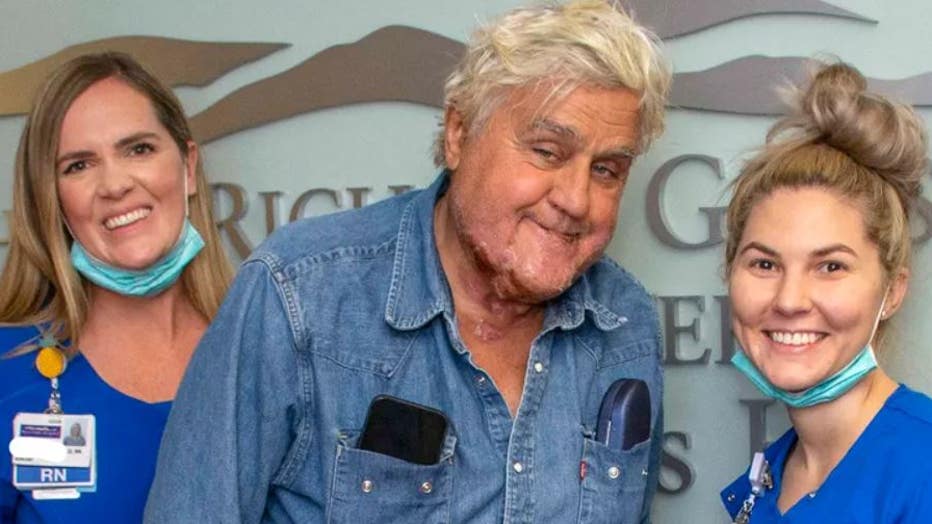 Leno has maintained a positive attitude throughout his treatment. Last Wednesday, Dr. Grossman said the former "Tonight Show" host was in good condition and in good spirits.

The 72-year-old is known for his famed car collection.

Jay Leno and his best friend Kevin Eubanks give FOX 11's Brooke Thomas a tour of the "You Bet Your Life" host's car collection.

Leno had been set to appear at a financial conference in Las Vegas the day after the fire, but canceled because of a "serious medical emergency," People magazine reported earlier Monday, citing an email sent to those attending the conference.

Leno turned his love of cars into a CNBC series, "Jay Leno’s Garage," and now hosts a revival of the game show "You Bet Your Life," airing on FOX.