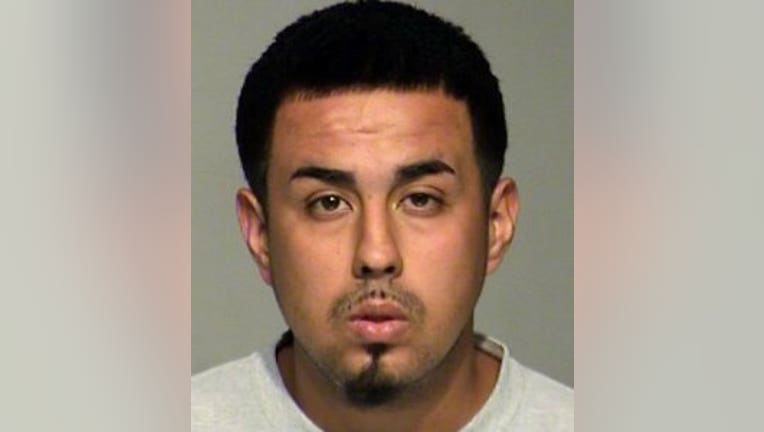 WEST ALLIS -- A West Allis man is accused of stabbing his ex-girlfriend to death -- despite the fact that two days prior, a domestic abuse injunction was issued against him, prohibiting him from contacting the victim for four years. Five days before her death, prosecutors say the man entered her home while she was sleeping.

27-year-old Emmanuel Sanchez of West Allis faces one count of first degree intentional homicide, use of a dangerous weapon, and one count of knowingly violating a domestic abuse injunction, domestic abuse assessments (temporary restraining order/injunction) for the death of 24-year-old Crystal Leopold. It happened August 11th near 25th and Orchard.

According to a criminal complaint, when police arrived on scene, a woman told them "she's upstairs. She has a knife in her chest!"

Leopold was found in an upper unit lying on the floor with the red handle of a butcher knife sticking out of her chest. A man was kneeling next to her, trying to apply pressure to her chest and perform chest compressions. Life-saving measures were unsuccessful and Leopold was pronounced dead at the scene.

An investigation revealed the knife did not belong to anyone at the home.

The complaint indicates investigators spoke with the man found kneeling next to Leopold. He indicated he and the woman who greeted police at the scene lived at the home with Leopold. He said they agreed to move in with Leopold "to provide her extra support and protection from her ex-boyfriend" -- identified by this man as Emmanuel Sanchez.

This man said on August 11th, Leopold was getting ready to go on a date with someone she had just met when the man said he heard her screaming for help. Leopold was found in the bathtub, with Sanchez on top of her. The complaint says Leopold was trying to push Sanchez off of her, and her male roommate told police he initially thought Sanchez was strangling her.

When the roommate went back upstairs, the complaint indicates he found Leopold with a knife sticking out of her chest. She was trying to pull the knife out, and pleaded with her roommates not to let her die. That's when the male roommate tried applying pressure to the wound.

The complaint indicates Sanchez's brother called 911 on him, and police responded to the area near 35th and Becher. Sanchez's brother told investigators Sanchez called him on the night of August 11th -- begging to be picked up at 35th and Greenfield. He said his brother sounded out of breath, and told him he was hiding in a park. When Sanchez's brother got to Rogers Park, he said he found his brother sweating profusely and breathing hard. As they drove from the park, Sanchez told his brother "he thought he may have attempted a homicide," and that he had "stabbed Crystal." He then said he wanted to kill himself and ultimately jumped from his brother's vehicle as his brother was dialing 911.

Sanchez took off running from the area near 34th and Rogers, and he was located by officers near 38th and Lincoln -- where he was arrested.

The complaint indicates Leopold's roommates identified Sanchez as a suspect in a line-up.

The complaint notes a history of domestic abuse between Sanchez and Leopold. On August 9th, two days before Leopold's death, a domestic abuse injunction was issued against Sanchez for four years -- and he was prohibited from contacting Leopold or being present at her home. He was served with that order on August 10th.

Five days before Leopold's death, on August 6th, police were called to the home to investigate a complaint regarding the violation of a temporary restraining order granted against Sanchez on July 26th. Leopold told investigators Sanchez had entered her home in violation of the order while she was sleeping, and he'd taken her phone from the charger in her bedroom. She indicated Sanchez "appeared to be on drugs." She said she got her phone back and dialed 911, and Sanchez left.

Sanchez made his initial appearance in court in this case on August 16th. Probable cause was found for further proceedings, and the case was adjourned for a preliminary hearing.