"The one constant was always, 'I want to see my girls grow up, and I want to walk them down the aisle,'" Cheryl Shelton told WJW.

With seven daughters, the family realized it was unlikely the U.S. Army veteran would be able to accomplish that, so they came up with a plan to make his dream a reality. The Sheltons have a large, blended family that includes adopted daughters and children from a previous marriage.

With last-minute help from hospice, David's Bridal, Taylor Elchert Photography, a local hair studio and others, the plan came together in just days.

"We had this idea we put together in three days," said Cheryl. "We got all the wedding gowns for the girls and hospice helped us out a great deal with some of the planning." 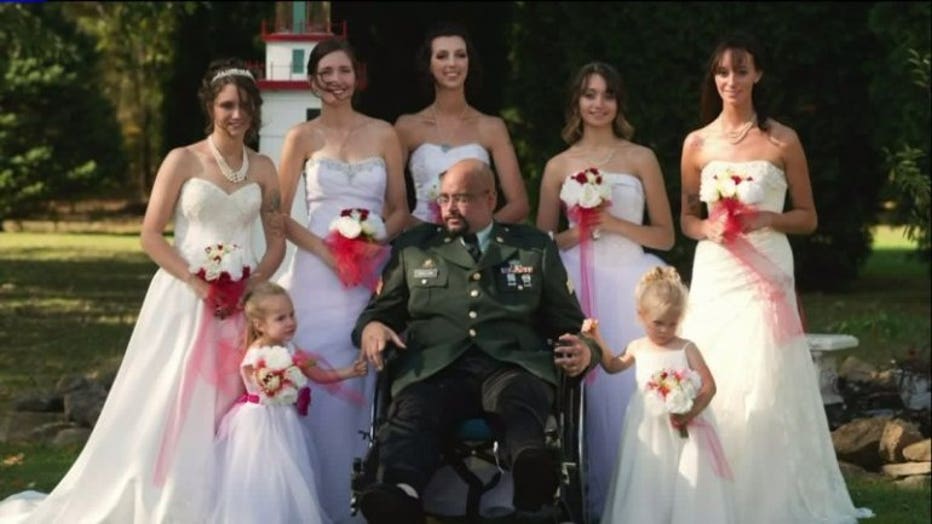 "What girl doesn't want to get in a wedding dress and her hair and makeup done? So I was all in but more so for the reasoning behind it," said daughter Candice Talbot.

The plan was kept a secret from Willie who was asked only to give away Emily Flinn, the only one of his daughters who was already married, so she could renew her vows.

"We got maried at a courthouse so there wasn't the formality to it where he could actually give me away," said Flinn.

"He had no clue that this was going on and everybody got dressed, so I said, 'she is going to have all the girls be the bridesmaids and everything for her;' little did he know that they were all going to be brides," said Cheryl.

"Actually, it was my sister, Candice, that texted me and said, 'hey, you need to pick out a wedding dress and give me your measurements because we are going to pick one out for you; you are going to walk down the aisle on Saturday," said Jennifer Talbot.

Three days later, with Willie in his dress uniform in a backyard ceremony, each of his daughters came out of the house, one at a time, all in wedding gowns.

"He looked a little confused , and then it was just great to see everybody," said Flinn.

In a father-daughter ceremony performed by Millersburg Christian Church Pastor Wes McElravy, the girls got to see the gleam in their father's eye they would expect to see at their actual wedding.

"This was very touching for him and it was a dream that we could fulfill to the best or the closest we could possibly do," said Cheryl.

And Willie was helped out of his wheelchair to stand with his daughters and experience his greatest wish.

"I always assumed that my dad would be there to walk me down the aisle and when the possibility was there that he wasn't going to be able to -- this was everything," said Lindsey Shelton.

Less than two weeks after the ceremony, on Monday, October 16, Willie Shelton passed away.

The girls will each now also have something of their own to keep for their actual weddings.

All seven will have a locket in which they will have a photo of their father with them in a wedding dress, and the words, "a father's love never ends," engraved on the back.

"Even though part of the dream was fulfilled last week, when they get married, the rest of it will be because he will still be with them," said Cheryl.

Through their loss, the family says it is only fitting that they honor the life and the memory of Willie.

"He was the happiest person, the most giving person, and this was our chance to give him something," said Jennifer.​