Staff at the Richmond Animal Care and Control (RACC) municipal shelter have been fielding calls about the dogs from all over the nation, even Canada and the United Kingdom.

The duo have spent the past three years working in tandem – six-year-old Blue Dozer makes the path and 12-year-old, blind OJ follows in his shadow. They’re a bonded pair who had to be adopted together after their original owner surrendered them, facing housing problems. 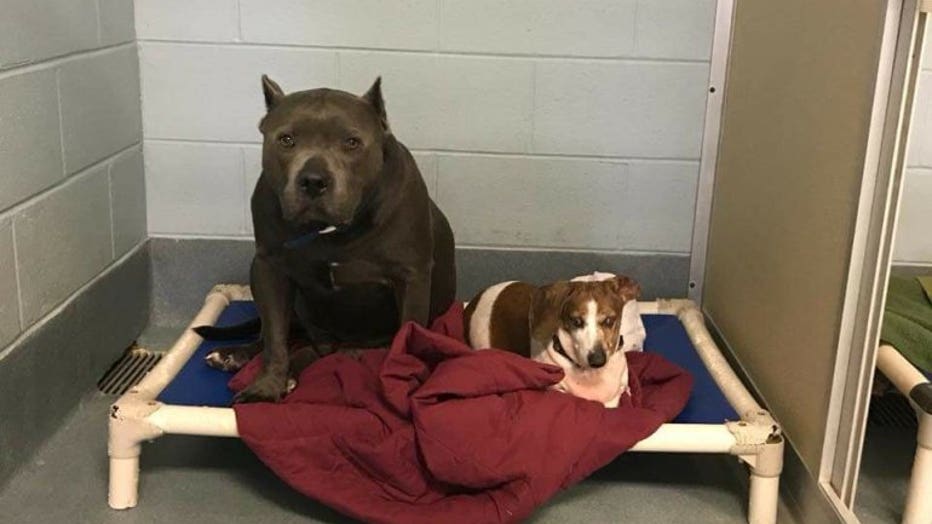 The odd couple was adopted Sunday. Then on Tuesday, OJ was surrendered, but the adopter (whose identity won’t be disclosed) kept Blue Dozer.

RACC outreach coordinator Robin Young said they met with her and thought they had made a successful adoption.

“We did our best to talk to them, explain it’s a bonded pair,” Young said. “We’re proud of our adoption process. A lot of municipal shelters have you sign a basic application and you’re out the door. You can pick any animal you want. We spend time talking to potential adopters. We’re honest if we don’t think an animal is a good fit for their situation.”

Just two days later, a volunteer alerted them to a Facebook post by the Shenandoah Valley Animal Services Center (SVASC). A blind dachshund had just been put up for adoption there. 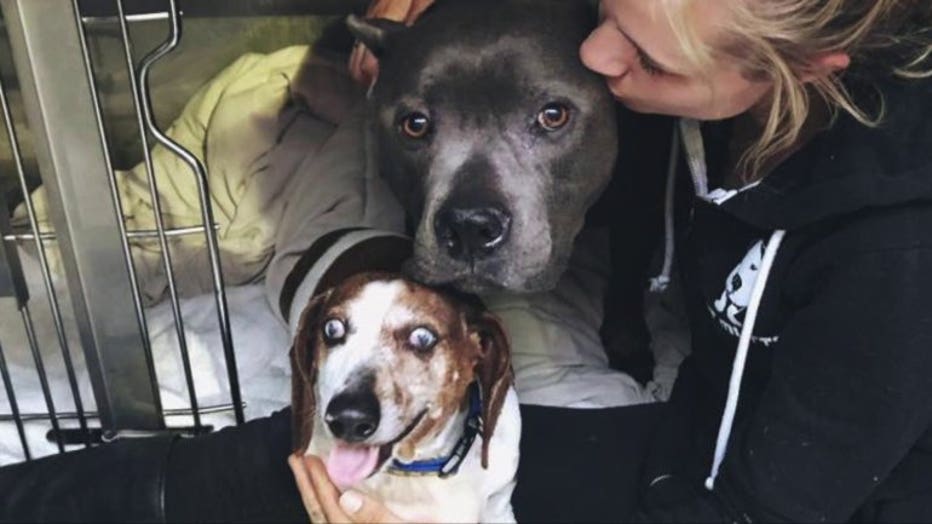 “Physically, I was sick to my stomach,” Young said. “When we saw that, we went into recovery mode and we got to get these two dogs back together.”

The microchip was traced back to the owner and RACC confirmed it was OJ.

“She wanted to give up the dog because it was biting and nipping, which sadly is to be expected with a blind older dog, that’s in a new home,” Young said.

RACC convinced the adopter to hand over Blue Dozer and they drove 100 miles to get the two back together.

Dogs 'happy' after being reunited

Less than 24 hours after their return to Richmond, Blue Dozer came up to a reporter with his tail wagging. OJ stayed right by his side.

“They’re happy. They’re here at the shelter,” Young said. “They’re back to their normal selves."

The shelter said they won’t be doing anything with OJ and Blue Dozer for the next few days other than letting them recover -- snuggle and eat. Then they’ll be taking applications to find the dogs a new home together.

Anyone interested in taking home an animal from RACC is required to fill out an adoption agreement. It asks for general information, residency information, as well as pet care and history. The document doesn’t specifically state an owner has to keep a bonded pair together, but RACC says that’s a change they can consider for the future.

Thursday, CBS 6 also spoke with Page Hearn via Skype. She owns the rescue group, Virginia Paws for Pits, in Augusta County. Hearn said the woman who adopted OJ & Blue Dozer first reached out to her over the weekend, after Hearn shared a RACC photo on Facebook.

“We’re not friends, I don’t know her but I guess she contacted me through the post,” Hearn said.

Then late Monday, Hearn said she was tagged in numerous posts saying OJ was found on the side of the road in that area and taken to the SVASC.

“She told me that the little dog had bit someone and that she didn’t have to keep the little dog, and she was keeping Dozer and she had signed OJ over to the shelter,” Hearn said. “I don’t think she had any intention to keep that dog from the get-go.”

Hearn said she then posted on Facebook to make others aware of the situation.

“I have never had a post go viral so quickly in all of my years of rescue,” Hearn said. “That was not my intention. I did not want people to harass or threaten this woman.”

Hearn said she just hoped the adopter would see how many people were upset and return Blue Dozer.

“I felt extremely guilty,” Hearn said. “I couldn’t have lived with myself without doing everything I could do to get them back together.