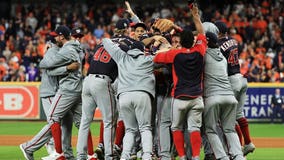 HOUSTON -- Almost out of contention in May, champs in October.Howie Kendrick, Anthony Rendon, and the Washington Nationals completed their amazing comeback journey — fittingly with one final, late rally on the road.In Game 7 of the World Series, no less.Kendrick and Rendon homered in the seventh inning as the Nationals overcame a two-run deficit, rocking the Houston Astros 6-2 Wednesday night to claim the first title in franchise history.With all eyes on Max Scherzer and his remarkable recovery after a painkilling injection, these Nationals truly embraced their shot in the first Series when the road team won every game.Even more against the odds: Juan Soto and Washington rallied from behind to win five elimination games this postseason, an unprecedented feat.Stephen Strasburg, Patrick Corbin and the Nats brought the first World Series championship to the nation's capital since ol' Walter Johnson delivered the crown for the Senators in 1924.This franchise started out as the Montreal Expos in 1969 when the major leagues expanded beyond the border, putting a team with tricolor caps at jaunty Jarry Park. 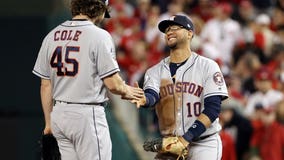 WASHINGTON -- The Houston Astros handed the ball to Gerrit Cole, and he gave them a firm grip on the World Series.Cole looked exactly like the stud who dominated baseball most of this season, bouncing back from a Game 1 clunker to pitch the Astros to a 7-1 win Sunday night and a 3-2 lead.Minus ailing ace Max Scherzer, the Nationals were no match in this Washington wipeout.Rookie Yordan Álvarez and Carlos Correa hit early two-run homers off emergency starter Joe Ross as Houston won its third straight at Nationals Park. 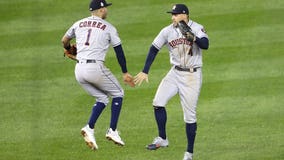 WASHINGTON -- José Altuve doubled twice and scored both times, Zack Greinke repeatedly worked out of trouble, and the Houston Astros showed they were not going to go quietly, beating the Nationals 4-1 Friday, Oct. 25 to cut their deficit to 2-1 in the best-of-seven Fall Classic.Houston can even things in Game 4 on Saturday night, Oct. 26 at Nationals Park. 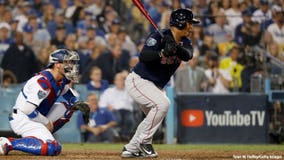 LOS ANGELES — The Latest on Game 4 of the World Series (all times local):9:08 p.m.Steve Pearce hit a tying homer in the eighth and a three-run double in the ninth, and the Boston Red Sox rallied from a four-run deficit in the seventh inning for a 9-6 win over the Los Angeles Dodgers on Saturday night and a 3-1 World Series lead.The improbable surge all started with pinch-hitter Mitch Moreland's three-run homer in the seventh, shortly after Yasiel Puig's three-run homer in the sixth had put the Dodgers up 4-0.Pinch-hitter Rafael Devers singled in Brock Holt with the tiebreaking run in the ninth, with also included Xander Bogaert's RBI single.Craig Kimbrel gave up Enrique Hernandez's two-run homer in the bottom half before getting the final three outs.Chris Sale starts for the Red Sox on Sunday against Clayton Kershaw, tying to close out Boston's fourth title in 15 seasons.8:19 p.m.Thanks to Steve Pearce, we're tied again in the late innings at Dodger Stadium. 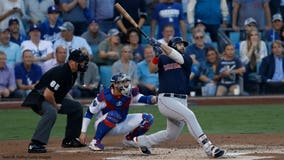 LOS ANGELES  — The Latest on the World Series (all times local):11:42 p.m.The longest game in postseason history is headed to a 16th inning at the World Series.Boston and Los Angeles are tied 2-all after 15 innings and more than six hours of play in Game 3.During the bottom of the 15th, the game surpassed the Giants' 18-inning, 6-hour and 23-minute win over Washington in the 2014 NL division series.The Red Sox nearly got another run in the 15th against Kenta Maeda, the Dodgers' sixth reliever. 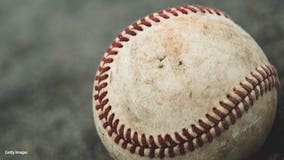 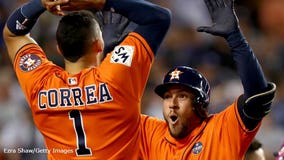 LOS ANGELES -- George Springer and the Houston Astros rocketed to the top of the baseball galaxy Wednesday night, winning the first World Series championship in franchise history by romping past the Los Angeles Dodgers 5-1 in Game 7.Playing for a city still recovering from Hurricane Harvey, and wearing an H Strong logo on their jerseys, the Astros brought home the prize that had eluded them since they started out in 1962 as the Colt .45s.Springer led off the evening with a double against Yu Darvish, and soon it was 2-0. 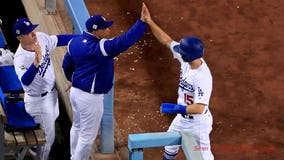 LOS ANGELES -- Chris Taylor, Corey Seager and the Los Angeles Dodgers sent this twist-and-turn World Series to Game 7, rallying against Justin Verlander to beat the Houston Astros 3-1 Tuesday night.A comeback win in Game 6 on Halloween night gave fans at Dodger Stadium and beyond a true treat: A year after the Cubs beat Cleveland in a Game 7 thriller, the baseball season is going the distance.Yu Darvish will start for Los Angeles. 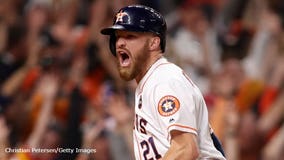 HOUSTON, Texas -- Alex Bregman hit a game-ending single off Kenley Jansen with two outs in the 10th inning, and the Houston Astros outslugged the Los Angeles Dodgers 13-12 Sunday night to take a 3-2 World Series lead.Silent early when ace Dallas Keuchel allowed Los Angeles to spurt ahead 4-0, the crowd erupted over and over as the Astros sent balls careening all around — and out of — pulsating Minute Maid Park.Jose Altuve, Carlos Correa, Yuli Gurriel, George Springer and Brian McCann homered for Houston, which tied the score 4-4 against Clayton Kershaw, fell behind 7-4 on Cody Bellinger's three-run homer, then rallied again to lead 11-8 after seven innings and 12-9 after eight.Yasiel Puig's two-run homer in the ninth off Chris Devenski was the record 22nd of the Series, and Chris Taylor tied the score with a two-out, two-strike RBI single.Jensen hit McCann with a pitch with two outs, George Springer walked and Derek Fisher pinch ran for Bregman at second. 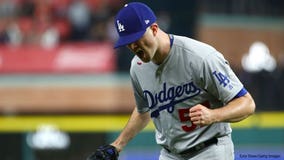 HOUSTON -- The Latest on Game 4 of the World Series between the Los Angeles Dodgers and Houston Astros (all times local):10:25 p.m.Cody Bellinger lined a go-ahead double in the ninth inning, four Dodgers pitchers combined on a two-hitter and Los Angeles rallied past the Houston Astros 6-2 Saturday night to tie the World Series at 2-all.Joc Pederson homered to cap a five-run burst in the ninth, ensuring the Series will be decided next week at Dodger Stadium.Next up is Game 5 on Sunday night at Minute Maid Park in a marquee matchup. 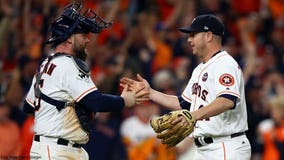 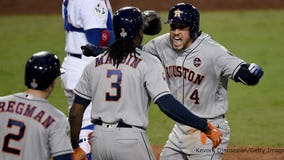 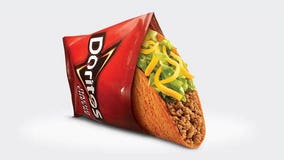 MILWAUKEE -- Postseason baseball is upon us, and Taco Bell and Major League Baseball are teaming up once again for the return of "Steal a Base, Steal a Taco."The first player to steal a base during the 2017 World Series presented by YouTube TV will be dubbed the sixth-ever Taco Hero, giving America free Doritos Locos Tacos.It happened Wednesday night, October 25th during Game 2. 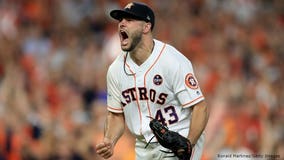 HOUSTON — Charlie Morton and Lance McCullers combined for a three-hitter, Jose Altuve and Evan Gattis homered and the Houston Astros reached the World Series, blanking the New York Yankees 4-0 Saturday night in Game 7 of the AL Championship Series.Just four years removed from their third straight 100-loss season in 2013, the Astros shut down the Yankees for two straight games after dropping three in a row in the Bronx.Next up for the Astros: Game 1 of the World Series against the Los Angeles Dodgers on Tuesday night. 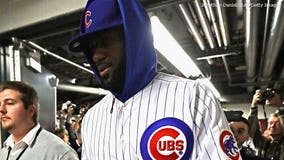 CHICAGO — LeBron James dressed like a champion — a World Series champion.James made good on a bet with close friend Dwyane Wade and showed up wearing a Chicago Cubs uniform before Friday night's game between the Cleveland Cavaliers and Chicago Bulls. 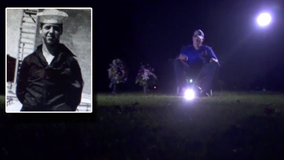 FUQUAY-VARINA, North Carolina – A North Carolina man drove 650 miles to listen to the Chicago Cubs game at his father’s gravesite.The News &amp; Observer of Raleigh reported that Wayne Williams promised his father they would be together when the Cubs won the World Series.So the 68-year-old drove from his home in Wake County to Greenwood, Indiana where his father is buried.When he arrived, Williams sat in a chair and listened to the game on his smartphone next to his father’s grave.“He would have said, ‘I told ya, I told you they woulda won,’” Williams said, referring to his father, who died in 1980.The Cubs defeated the Cleveland Indians 8-7 Thursday to claim their first World Series victory in more than 100 years. 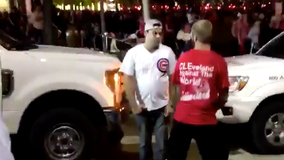 **Warning: The video at the bottom of this story is graphic** 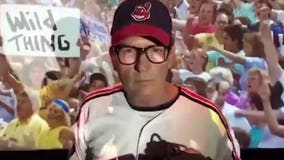 By the end of Wednesday night's World Series Game 7 between the Chicago Cubs and Cleveland Indians, one curse will be broken. 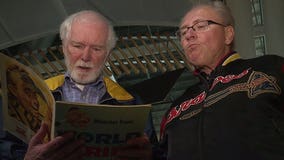 MILWAUKEE -- Only a handful of baseball teams have done what the Chicago Cubs will try to do on Wednesday night, November 2nd -- come back from a 3-to-1 deficit to win the World Series. 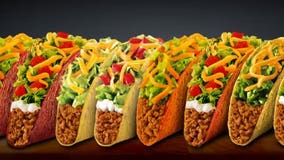