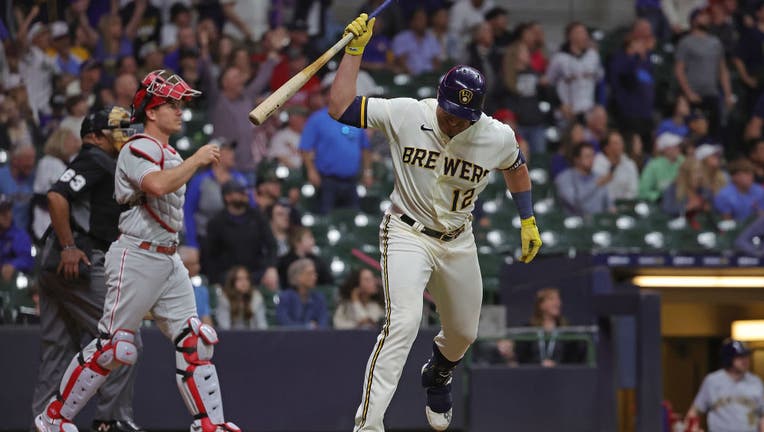 MILWAUKEE, WISCONSIN - JUNE 07: Hunter Renfroe #12 of the Milwaukee Brewers reacts to a fly out during the ninth inning against the Philadelphia Phillies at American Family Field on June 07, 2022 in Milwaukee, Wisconsin. (Photo by Stacy Revere/Getty

MILWAUKEE - Alec Bohm and Matt Vierling homered off Josh Hader in the ninth inning as the Philadelphia Phillies rallied to beat the Milwaukee Brewers 3-2 on Tuesday night for their fifth straight win.

Milwaukee led 2-1 in the ninth and handed the game to its All-Star closer, who hadn't blown a save — or surrendered a run — in 19 previous appearances this year. Bohm belted a leadoff homer off Hader (0-1), snapping his streak of 40 straight regular-season scoreless appearances dating to last season, which tied a major league record.

Two batters later, pinch-hitter Vierling, in his first major league at-bat since May 10, took Hader deep again to put the Phillies in front.

"They definitely got to me today," Hader said. "Tip the cap. It definitely sucks, but it happens."

Hader got a fastball up to Bohm, while Vierling connected on a slider that was down in the zone.

Vierling started his day in Omaha, Nebraska, before flying to Chicago and then taking a car service to Milwaukee, arriving a few hours before game time after being recalled from the minors.

"It's definitely a whirlwind," Vierling said.

He was mobbed by teammates after taking Hader deep.

"I came into the dugout and everybody was so fired up," he said.

Hader said he planned to watch video of his outing after the game and would be ready to move on by Wednesday.

"The scoreless streak, that was pretty cool," Hader said. "I was hoping to get another one, but it's baseball. It’ll keep you honest."

"Unfortunately, we could only give him a one-run lead going into that inning and we paid a price for it," Counsell said. "He’s been so good. It’s surprising, but at some point it’s going to happen."

Connor Brogdon (1-0) pitched a scoreless eighth, and Corey Knebel closed it out with his 10th save in 13 tries. Knebel walked three batters to load the bases but struck out Pablo Reyes to end it. The Phillies are 4-0 since they fired manager Joe Girardi on Friday.

"We believe this is a good club and the pieces are here to win games," Phillies interim manager Rob Thomson said. "Maybe we’re getting on a roll."

The Brewers, who on Monday had a day off for the first time since May 19, have lost four straight.

Milwaukee took the lead in the first off Ranger Suárez when Christian Yelich reached on an infield single and scored on Andrew McCutchen’s double.

The Phillies tied it in the third when Mickey Moniak led off with a single and later scored on Bryce Harper’s sacrifice fly.

Milwaukee jumped back in front in the fourth. Yelich singled, took second on a two-out wild pitch and scored on Rowdy Tellez’s opposite-field double.

The Phillies loaded the bases with one out in the fifth before starter Jason Alexander got J.T. Realmuto to ground into an inning-ending double play.

Alexander, making his second career start, gave up seven hits and one run in five innings.

Suárez gave up six hits and two runs in seven innings. He struck out five and didn't walk a batter.

Brewers: Reinstated OF Hunter Renfroe from the 10-day injured list. ... Placed RHP Trevor Gott on 15-day injured list with right groin strain. ... SS Willy Adames could be activated from the injured list Wednesday, Counsell said. Adames has been out since suffering a right high ankle sprain on a slide on May 15. Adames experienced right quad soreness while on a rehab assignment, which has delayed his return. ... INF Luis Urias returned to the lineup after leaving Friday’s game with a bruised thumb. ... 2B Kolten Wong left Tuesday’s game in the fourth inning with right calf soreness.

The late Wes Covington was inducted to the Milwaukee Braves Wall of Honor prior to the game. Covington’s wife, Pat, tossed the ceremonial first pitch. Covington spent his first five full seasons and part of his sixth with the Braves. He started all 14 games for Milwaukee in the 1957 and 1958 World Series and was a key contributor in the Braves 1957 World Series win over the New York Yankees.

Phillies: RHP Aaron Nola (3-4, 3.92 ERA) gave up one hit over seven scoreless innings against the Brewers on April 24. Nola is 4-1 with a 2.63 ERA in nine career starts against Milwaukee.

Brewers: RHP Adrian Houser (3-5, 3.51) will make his second against the Phillies this season. Houser is 1-1 with a 3.19 ERA in five career games (two starts) against Philadelphia.