LOS ANGELES - Ron Popeil, known for appearing in famous infomercials, has died at the age of 86.

The television personality and inventor passed away on Wednesday morning at Los Angeles' Cedars-Sinai Medical Center, according to a press release from his rep obtained by Fox News.

Popeil was known best for the catchphrase "set it and forget it," which he used to sell the Showtime Rotisserie. The product reportedly grossed over $1 billion, blowing past other sales records, including those from QVC.

The inventor got his start in a humble background of selling kitchen products in Chicago before his sales pitches "quickly became must-see live entertainment" that gathered audiences in the "hundreds" who would "marvel at his sales shows in the marquis booth at Woolworth’s flagship store."

In 1959, Popeil transitioned to television and made his first infomercial for the Chop-o-Matic. 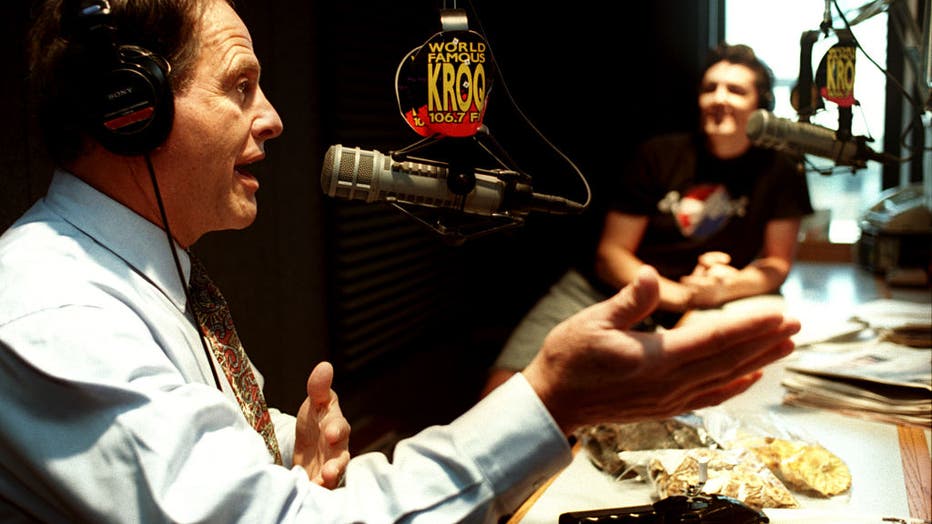 Photo of Popeil during an on air KROQ interview with Kevin and Bean.

After becoming a mainstay on late-night television, Popeil's star began to rise and he appeared in a number of television shows, often playing himself in small cameo roles.

He also appeared on talk shows like "The Martin Short Show" and "Late Night with Conan O'Brien." Popeil also served as a judge on 2001's "Iron Chef USA: Showdown in Las Vegas."

According to the release, Popeil "garnered more viewers and more hours of American Television than any other celebrity or TV personality."

Outside of "set it and forget it," he was also known for frequently using such catchphrases as "but wait, there's more" and "less shipping and handling." His innovations have been archived by The Smithsonian Institute.

Products sold by his company RONCO include Popeil’s Pocket Fisherman, Mr. Microphone, Hair in a Can, Inside the eggshell egg scrambler and more.

"A perfectionist and tinkerer to his core, Ron had the uncanny ability to identify a need that the consumer didn’t realize existed only to then engineer a product that delivered its promise flawlessly to millions of customers," said the release. "… Unabashedly authentic and approachable, Ron used his products as a tool in filling a gap he saw created by the circumstances he faced as a child. Without a traditional family structure, his products and life focused on the kitchen which he saw as the nucleus of a home and family."

Popeil's goals were to make opportunities for families to gather "accessible" and "to bring people together for common purpose and joy — no matter their background or experience."

As if his accomplishments in sales and invention weren't enough, Popeil also worked as a Director of MGM Resorts International for over 30 years and helped to develop Las Vegas' entertainment brand.

Outside of work, he enjoyed fishing, skiing, sailing and more.

He is survived by his wife Robin, daughters Kathryn, Lauren, Contessa, and Valentina as well as his grandchildren Rachel, Isabella, Nicole, and Asher. He also had a daughter named Shannon who is now deceased.