SAN DIEGO, Calif. (Border Report) — U.S. Border Patrol Agents Justin Castregon and Jarrett Decker were atop a bluff on Monday morning that overlooks Imperial Beach and a border wall that juts into the Pacific Ocean, when Paul, a tourist, came up to them and asked if he had permission to talk to them and apologized for being in a restricted area.

The gentleman was with his 84-year-old father-in-law and elderly mother-in-law who he said were visiting from Albania. The elderly gentleman had trouble walking and used a cane, and although there were signs posted indicating this area is closed to the public on weekdays — except for those who hike up a half-mile hill — Agent Castregon smiled and kindly looked the other way as Paul’s car was parked in the lot.

Paul, who didn’t give his last name, was so grateful that he asked to take a photo of the agents with his in-laws.

“God bless you all. And thank you for all that you do to keep us safe,” Paul said as he shook their hands after taking a photo 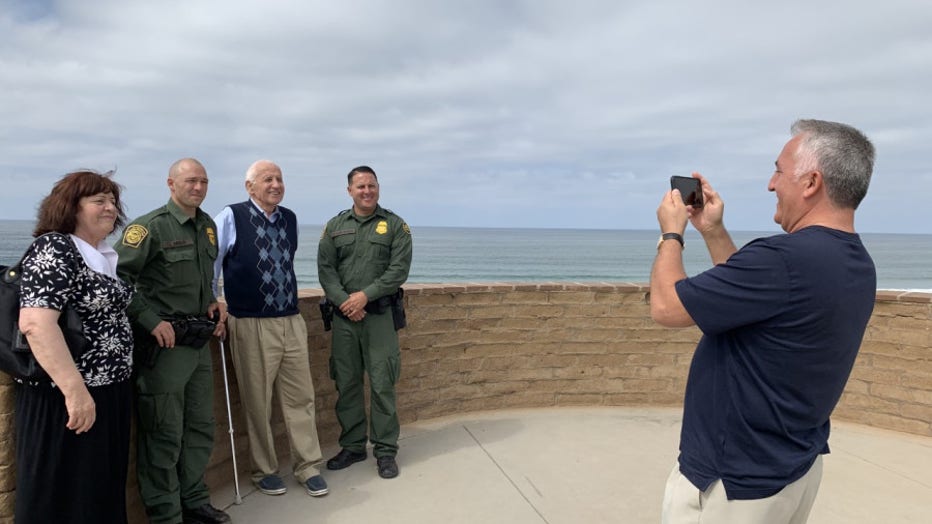 Issues that are as politically divisive as immigration, the building of a border wall and enforcement of the border often draw negative impressions from the public about what these agents do in the field.

Even the term wall vs. fence, draws criticism, Castregon said.

“Whatever the kind of nomenclature is used, it’s important to remember that it is going to help us do our job much better and much safer. It’s not the one and only element that will help us to complete our mission but its a very big part of that,” Castregon said.

“As we saw in this sector in the early 90s before we had anything in the perimeter the illegal entries were just rampant, it was sort of chaotic at times. Since we did put up the primary (wall) in the early 90s and we are making improvements on it, we are seeing much less illegal entries. It’s much more difficult for people to make that illegal attempt to enter the United States,” he said.

The San Diego Border Patrol sector covers 60 linear land miles and 930 coastal miles. The sector has 1,900 agents and in the 1990s was the sector with the most apprehensions in the nation by far.

Agents here used to apprehend about 1,000 people trying to cross into the United States illegally per day. Now, that number is 160 per day.

In fiscal year 2019 there have been 56,000 arrests in the San Diego Sector, so far, Castregon said. That is up from the 36,000 total apprehensions in fiscal 2018. The fiscal year ends at the end of this month, but as the numbers currently stand, arrest already are up 43 percent from last year.

Castregon credits this decrease in migrant apprehensions to the building of a primary border wall as well as upgraded equipment and an aggressive strategy that was adopted here on Oct. 1,1994, called Operation Gatekeeper.

Operation Gatekeeper shifted the operational emphasis from apprehension to deterrence and prevention. Many agents were transferred to “high visibility” fixed positions along the border, and a three-tiered system of agent deployment was instituted. The sector also received new equipment, including four-wheel drive vehicles, infrared night scopes, and electronic sensors.

Now President Donald Trump’s promise to build a wall spanning the length of the entire Southwest border with Mexico has allowed Congress to approve funding to build new wall here, including a second higher wall to be built that is parallel to the first.

Fourteen new miles of border wall are going up in the Otay Mesa area.
The primary fence was finished three months ago. “And that goes all the way to the Pacific Ocean,” Decker said.

The second wall is 30-feet tall, that’s 12-feet higher than the first wall and is parallel to the first, shorter wall. The space in between the two walls ranges from wide enough to drive a truck through to 150-feet, to even more, depending on the terrain.

This canyonous mountain land is full of rocks, rattlesnakes, mountain lions, bobcats and thistles. Tires on vehicles can pop easily so in between the two walls an all-weather road has been laid down that agents can drive up and down easily.

On this road there have been placed poles of flood lights, underground sensors and radar and infrared cameras spaced throughout this fortified enforcement zone.

The new walls have a five-foot anti-climb shield at the top, which is a solid sheet of metal designed to prevent migrants who may be able to scale the metal bollards, from actually going over the top. The bollards are spaced four-inches apart and the slats are see-through. This allows agents to be able to see what’s going on the other side of the border, Castregon said.

Human traffickers, also called “coyotes” and drug smugglers “are very intelligent. So we, Border patrol, U.S. government work to be just that much better than they are,” Castegon said.

The border wall in many places is just feet from Mexican highways and roads in Tijuana. That sprawling city of 1.7 million people continues to grow up into the Otay Mesa where on the one side is dense population full of two-story homes where barking dogs and roosters crowing can be heard. On the contrary, the U.S. side is void of any homes, businesses or roads, and only is home to this new border wall. 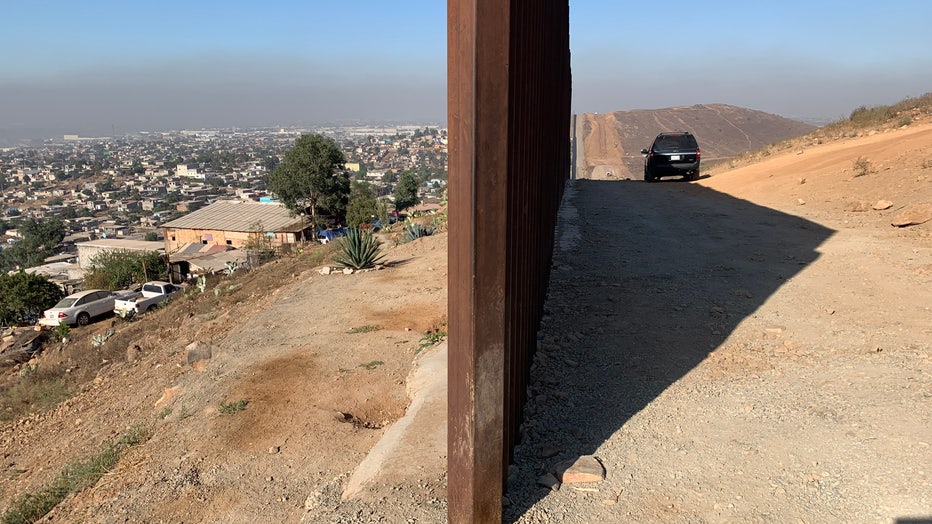 his is where the border wall in Otay Mesa, California, outside of San Diego, comes to an abrupt end at the edge of a canyon as seen in this Sept. 23, 2019 photo. To the left is the populated and sprawling city of Tijuana, Mexico. To the right is void

Agents refer to the border wall as the Border Infrastructure System, and they say it is just one tool in their arsenal to stop illegal entries into the United States.

These are “manpower multipliers,” Decker said. “Because with these cameras we don’t have to daisy-chain agents every 20 to 30 feet.”

So the visible placement of agents in key positions — such as atop a canyon where the border wall ends and on the bluff above Imperial Beach where the elderly tourists stumbled into the restricted area –is necessary to show coyotes their force and presence.

On Imperial Beach occasionally migrants will try to swim around the wall, which juts 30 feet into the Pacific Ocean. Agent Decker said that Border Patrol agents and other law enforcement personnel several times have had to rescue drowning migrants there.

“Sometimes they try to float by on a raft, or using a kickboard or on a little boat,” Decker said.

Sandra Sanchez can be reached at SSanchez@BorderReport.com. She is part of a 10-day Border Tour, which launched from San Diego and is driving to Brownsville, Texas, to report on the communities and people who make up the Southwest border. 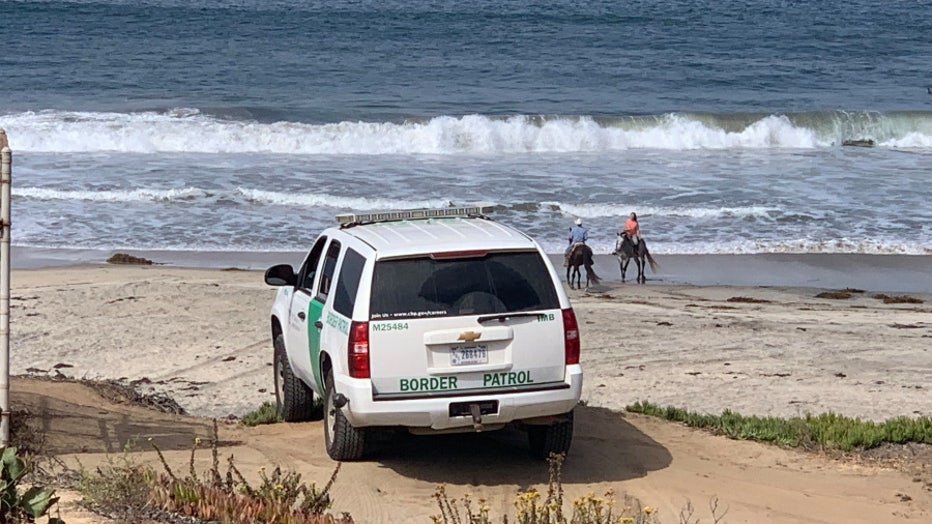 Horse riders on Imperial Beach cross in front of a Border Patrol truck on Monday, Sept. 23, 2019, stationed above a bluff overlooking the Pacific Ocean near San Diego. (Border Report Photo/Sandra Sanchez).
Visit the BorderReport.com homepage for the latest exclusive stories and breaking news about issues along the United States-Mexico border.