CHARLOTTESVILLE, Va. - A statue depicting Sacagawea and explorers Meriwether Lewis and William Clark was removed on Saturday in Charlottesville, the last of the Virginia city’s controversial monuments taken down over the weekend.

Charlottesville City Council voted unanimously to remove the statue from its pedestal during a special meeting held after the removal of two statues of Confederate generals earlier in the day.

Earlier Saturday, statues of Confederate Generals Robert E. Lee and Thomas "Stonewall" Jackson were also carted away. Racial justice activists had pushed to take down the larger-than-life Lee statue, which later drew the attention of white supremacists and other racist groups, culminating in the deadly "Unite the Right" rally in 2017.

Last week, the city council appropriated $1 million for the removal of all three statues, according to Charlottesville’s Daily Progress. Work to remove the two Confederate statues wrapped up earlier than expected so officials called a special meeting to take down the third Lewis, Clark and Sacagawea statue while the removal equipment was still on site, the newspaper reported — resulting in the need for no additional funding.

During Saturday's last-minute meeting, city officials also discussed the potential for the statue to be relocated to the city's Lewis and Clark Exploratory Center. For now, all the statues will be stored in a secure location until the city council makes a final decision about what should be done with them.

Lewis was born near Charlottesville in 1774 and later worked as President Thomas Jefferson’s personal secretary. In 1804, Jefferson tasked Lewis and Clark to lead an expedition to explore the land west of the Mississippi River following the Louisiana Purchase and map an all-water route to the Pacific Ocean.

Sacagawea, believed to have been just 16 or 17, joined the expedition with her husband and 2-month-old baby. She had been living among the Mandan and Hidatsa near present-day Bismarck, North Dakota, and "contributed significantly to the success of the journey," according to the National Parks Service.

The Charlottesville statue was erected in 1919 and depicts the figures all facing west, with Sacagawea in a crouched position below Lewis and Clark. In 2019, the city council discussed the statue with Native Americans, including descendants of Sacagawea who traveled to Charlottesville from Idaho, the Daily Progress reported.

Rose Ann Abrahamson, a descendant of Sacagawea, said at the time that she had seen nearly every depiction of her ancestor in the U.S., and the one in Charlottesville "was the worst we have ever seen," according to the newspaper. 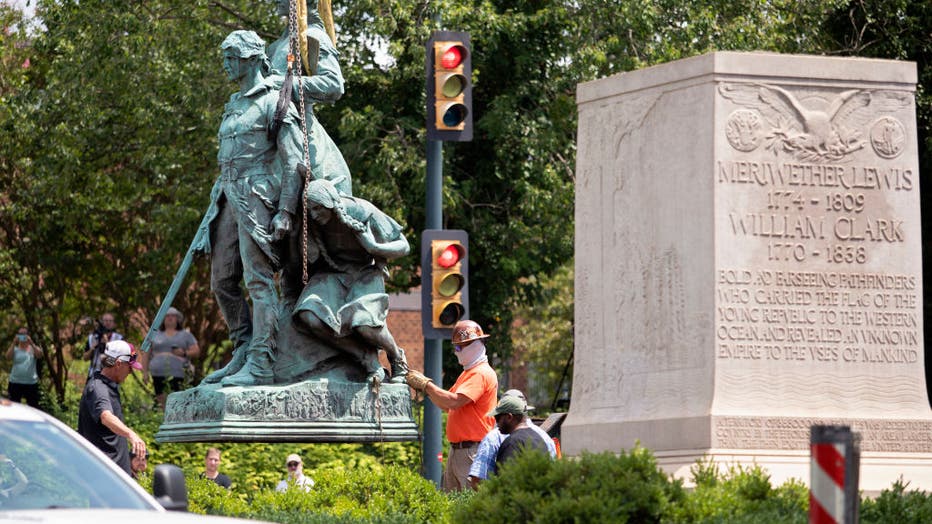 The statue of Meriwether Lewis, William Clark and Sacagawea is removed from Charlottesville, Virginia, on July 10, 2021. (Photo by RYAN M. KELLY/AFP via Getty Images)

While some historians have interpreted her crouching to signify directing the explorers and tracking, Abrahamson said the statue shows Sacagawea "cowering and recoiling."

During Saturday’s meeting, Abrahamson again voiced her opposition to the statue but said recontextualization of the monument could serve as a teaching moment.

"I feel that it should just be melted down," Abrahamson said. "That's my opinion. I feel that it's entirely offensive and it should be obliterated. But if it can be utilized to give a message to give a greater message to educate the public, that would be an opportunity. So I'm very pleased with what is taking place, and it's been a long road."